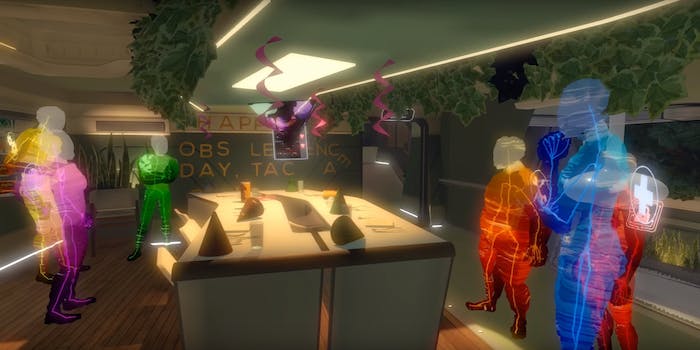 You’ve arrived at the space station too late. The crew is gone. They may be dead. But the clues to explain what happened, the windows to the past, are there for you to discover.

Steve Gaynor and Karla Zimonja, two of the three founders of The Fullbright Company, the developer of Gone Home, were at E3 to show off footage of their new game, Tacoma. It is set in an empty space station where extensive augmented reality recordings of the crew’s past are available for the player to view.

Fullbright’s previous game was Gone Home, a tale about a teenage girl, Samantha, discovering her sexual identity. The player took the role of Samantha’s sister, Kaitlin, who returns home from a trip to discover that the house is empty. Kaitlin finds a note from Samantha begging her sister not to look for her. The player then investigates the home in first-person perspective and discovers clues to reconstruct past events.

Gone Home was praised for its moving story and for the sense of place it created as the Greenbriar home was designed down to the finest levels of detail. The house served as a time capsule for 1995, the year in which the story takes place.

Gaynor, Zimonja, and the third co-founder of The Fullbright Company, Johnnemann Nordhagen, formed their partnership after working together on the Minerva’s Den DLC for BioShock 2. Gaynor was the lead writer and designer on the project, and Zimonja worked as his story editor. Gaynor was also a level designer for BioShock Infinite.

Developing content for BioShock, a series praised for the way its detailed environments tell stories, as well as narratives that heavily incorporate audio logs, gave Fullbright the experience needed to develop Gone Home. Tacoma presents a new type of challenge.

Even though the parallels between Gone Home and Tacoma are obvious, now Fullbright is dealing with a future society full of digital innovations, versus the relatively low-tech society of the mid-90s. It’s dealing with six different characters—the space station’s missing crew—each of whom has their own story to be told rather than just a single character.

I spoke with Gaynor and Zimonja at E3 about the particular challenges of developing Tacoma, the opportunity for deep storytelling that the game provides, and how their love of systems-driven games fuels development of their newest title.

Tacoma will be released in Spring 2017 for PC and Xbox One.

What is it you find attractive about telling stories through investigating past events, rather than living in the moments when the stories are taking place?

Karla Zimonja: Off the top of my head, the space to consider, rather than having to apprehend everything as it occurs, is meaningful. If you’re not actually trained as someone who is very observant, it would be very easy to miss important things. Having the freedom and the mental space to be like “All right, if I need to go back over this it’s here, it’s not just gone.” That’s a big deal.

Steve Gaynor: I think there’s something attractive about being an investigator. There’s obviously also something very attractive about being someone who’s participating in a story as it’s happening, Telltale Games for instance are very much about “I’m a driver of where this story goes,” but I think that there’s this other kind of inherent desire that we have to be able to kind of reconstruct things, or to have the freedom to really go through all the details of something and be able to put them back together.

On some level there’s a straight-up interesting level of voyeurism to the idea of “I’m in these peoples’ houses and I have the role that gives me the permission to go through everything that makes up their lives.”

Or, in Tacoma, this all happened in the past and there are these recordings of what happened to these people and I have the freedom to really kind of observe all of that in a way that I am unfettered in my access to all of this private stuff that makes up the entirety of who these people are.

I think there’s something that’s very different between that, and when the character is in the room with you in the present tense, and they know you’re there and they’re reacting to you and that’s like a different kind of social dynamic that you’re exploring? But it’s cool to be able to be someone who is free from those bounds of, “Someone’s watching me do this, the game is judging me based on what I do.” It’s more like, no, the game is letting me be free to dig as far into this as I want to.

SG: I think so, yeah. And the different ways that you can see into that, that you don’t have access to if you’re being watched. You know what I mean?

KJ: Just that satisfying concept of figuring something out that is like this archeological dig kind of concept, this is how things were, and figuring it out. You’re not just seeing it, you’re piecing it together and learning bit by bit. It’s a different process.

SG: I don’t think there’s anything that’s objectively more attractive or better about it. I think it’s just, we happen to be people that find that interesting and luckily we are able to make games that speak to that, so that we can play the kind of stuff that we think is cool.

I imagine you’re into narrative-heavy games in general. That those are the type of games you like to play.

Are you dissatisfied, when you do play those games, with the level of character investigation you get? Is your work a reaction to experiences you’ve had? You want something more?

SG: I would say that with Gone Home, that game was, in as far as being a reaction, it was the sense of we’ve seen pieces of this in other games. We’ve played a lot of games, we worked on the BioShock series where environmental storytelling and audio diaries are part of the experience, and a very evocative part of the experience.

But we hadn’t really played very much aside from Dear Esther, Thirty Flights of Loving, some earlier games that that part of the experience was the whole, like the whole thing. Like that was the game.

And so similarly, I think it’s really exciting when we do play games where it’s like, “I get to follow these characters around and observe them and put these things together.” If we really invest in that aspect, and we let that be the center of what the player has access to, then that’s something we haven’t seen before and that’s really exciting.

KJ: You do build on what’s there, and you take elements from what you know, which I mean, it’s kind of all…

SG: If anything it’s sort of like you see something and you’re like, I want to see more of that.

SG: And if we have the ability to put more of that out into the world, that’s really cool. I mean, on our own time I think that we’re the most interested in games that are very systems-heavy, single-player games like the new Deus Ex, Dishonored 2, I am deep into the new Hitman episodes right now.

I think that’s where our balance comes from. We love games that have really strong characters that we care about, but we want to give players access to that via the systems that drive the experience as opposed to just through more direct means.

What’s the connection? I mean, system-heavy games like Civilization, there’s no narrative in Civ. It could be very creative, it’s expressive in the moves that you’re making, but it’s a very cold, logical system that you’re learning how to manipulate. It’s the opposite of warm, emotional relationships between characters.

KJ: Both systems and writing often fall into the design department. The discipline is covalent in that way all by itself. The same people work on both. That’s a big deal.

SG: I think if it’s anything, it’s like a great screenwriter really caring about the direction or the cinematography of films.

SG: It’s that investment in how the thing functions and how it’s built is a huge influence on how you want to actually write, you know, the script for it.

SG: Yeah. And so I think that, you know, games are inherently a medium that is driven by how you interact with them. And so I think if anything the more invested you are in how games function systemically the better I hope you are at being able to write narratives that are uniquely suited to that kind of experience.

SG: You can have a game without story, but if you’re making a game you can’t have a story without a game.

Then does the fact that players are offered a deeper level of investigation into your characters affect the process of developing those characters?

SG: I think Gone Home was the most, the deepest dive on a single character because we gave you access to so many different facets of Sam’s life and the other characters’ lives, and this is much more of … us learning how to make an ensemble story that’s about how all of the characters react to a central event. So hopefully it’ll be interestingly different while still drawing from, you know, what I think we already do well.

I don’t want to assume. Does having greater access to people’s thoughts, feelings, memories, necessitate … much deeper creation of backstory? Do you have to know these characters much more deeply than you knew Sam in Gone Home?

KJ: Backstory is not necessarily like fleshed-out character, yes. Backstory does not a character make. But yeah we do have to know the characters, know what they would do in situations, know how they would react.