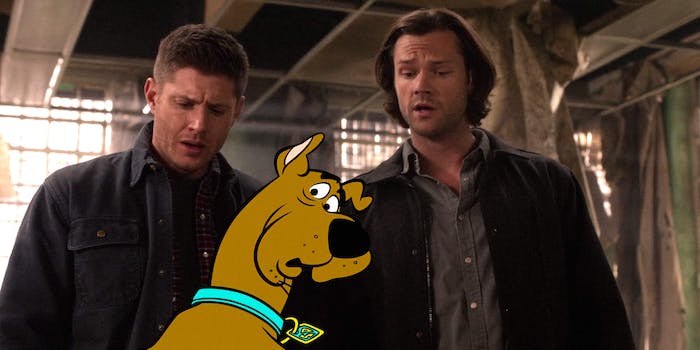 After 12 seasons on the air Supernatural is heading into new territory. The Winchester brothers fight monsters every week, they’ve broken the fourth wall, and have already been to several realms of existence, but now they’re heading to animation. One episode next season will crossover with Scooby Doo.

Yes, I am serious.

For season 13(!?) Supernatural is "entering the animated world of Scooby Doo," which Jensen Ackles and Jared Padalecki promise is not a joke pic.twitter.com/GgVkOQomMV

Supernatural stars Jensen Ackles and Jared Padalecki made the announcement at the CW’s upfront presentation on Thursday, and the idea was so out there that some initially thought the proposed crossover was a joke.

I don't think they're joking? Jensen did joke that he's the Fred and Jared is the Daphne. #CWUpfront

Not much is known about the episode itself, but an image from the episode of Sam and Dean Winchester with Scooby Doo was shown to those in attendance and quickly spread online.

Some fans weren’t quite sure what to make of the crossover yet—and others pointed out how little sense it makes —but they’re excited about the prospect of Sam and Dean solving mysteries with the Mystery Gang.