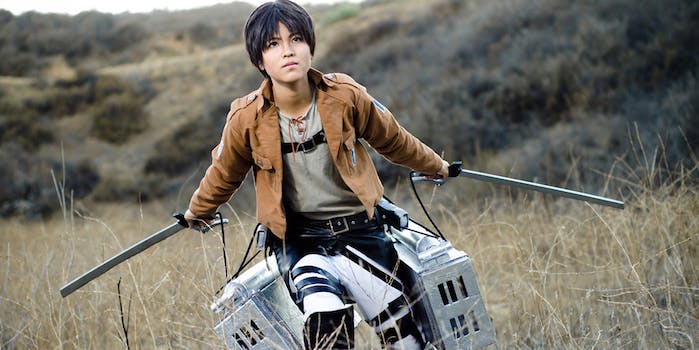 These ambitious fan projects hope to tide fans over during the long wait for more of Supernatural and Attack on Titan.

The finale of Supernatural Season 9 aired last night, along with a bombshell that will keep fans on tenterhooks until Season 10 airs in the fall. But in the meantime, a new fan project will hopefully help them ride out the wait: Supernatural: the Fanimation, or SPNF for short. The project—to produce a fan-made animated, alternate version of Season 9—is ambitious.

But together with a recently launched project to make a fan-animated production of Attack on Titan, it’s part of a growing trend of fans taking their creative talents and putting them to use making alternate versions of the things they love.

Alternate “seasons” of fandoms are nothing new. Supernatural: Redemption Road is a well-known alternate Season 7 written by members of the SPN fandom in an episodic format. Fan-made animated videos are likewise nothing new, though usually they’re short clips, like one recent popular fanimation featuring Batman and the Terminator. Combining the two is an idea that has become more common recently. A project started last year by the Homestuck fandom eventually went in the direction of an entirely original production, but it set the wheels in motion for more like it.

SPNF is the brainchild of SPN fans John Cohen, a 19-year-old Canadian, and Daniel LaLiberty, a 17-year-old from Wisconsin. Daniel says that their project “started out as a wistful joke,” the next-best thing this side of kidnapping the actors and having them roleplay new scenes, particularly since Jared Padalecki is too tall to fit in anyone’s trunk. The two brought on production manager May Sage-Chiasson and began working on ideas for streamlining and improving the rocky, controversial Season 9 with outlines of all new episodes. From there, the call went out to fans on the project’s official Tumblr:

Are you unsatisfied with Season 9?

Do you have a background in animation?

Do you spend a lot of time in your room imitating the voices of 30-something-year-old men?

So how does SPNF propose to re-work Season 9? According to Daniel, the fan animation will “tweak poor characterization, revamp the lore to how it was in earlier seasons, and hook together fan ideas that are very popular.” They plan to include novelty episodes like a musical, and account for the much-criticized way that “women are killed off after 30 seconds of screen time.” They also want to include a “wider representation of the LGBTQI+ community and more ethnically and culturally diverse peoples.”

The goals of the Attack on Titan (SnK) fan animation project, which got off the ground a few weeks after SPN’s, are similar: produce a gripping Season 2 that will tide fans over until the real thing. The SnK fanimation project comes from a fan named Elizabeth, a self-described college freshman who “loves acting, directing, writing, and a good story.” She and her friend Alex, who shares her interests in directing and acting, decided to tackle it after the SPN fanimation project inspired them to do something similar:

I got wind of [the SPN fanimation project] and was really interested by it because I love to act, direct and write, but had never been able to really get a good idea down. I turned to my close friend Alex, because while I knew I wanted to do a fanimation, I wasn’t sure what, and Alex suggested we do something based off of Attack on Titan, because we’d both recently gotten into the fandom and were really excited for the next season (which we discovered wasn’t going to be released for a few years). That was when we decided we would make the project about SNK—we wanted to give fans something to keep them going while they waited for the real thing.

So far, the SnK fanimation project has a casting director and is accepting applications from fans to join their crew. They’re particularly in need of animators, voice actors, sound effects staff, and script writers. The character listing is available here, and all voice auditions can be sent directly to [email protected] Elizabeth and Alex note that they welcome applications as well as questions and feedback of all kinds.

Meanwhile, the SPNF crew has ballooned: in addition to the impressive cast and production team already assembled, the project’s Tumblr has grown by thousands of followers. You can find out how to join the SPNF production team here on their submission page.

Daniel says he hopes the project will move some members of his team along a professional career trajectory. “One of our animators is hoping to go to college for animation, and several of our scriptwriters are looking to be professionals somewhere in the literature community.”  In fact, some of the SPN team already are pros, including professional voice actor Tajja Isen, and professional production assistant Jennifer L. Anderson.

The main delay in production for both projects is one that will doubtless be the biggest hurdle for all similar projects to overcome—the hunt for talented fanartists with the ability and time to serve as animators. SPNF is hoping to release an episode by early September, while SnKF hopes to get off the ground soon. In the meantime, the two projects are working together. Daniel notes that he’s helped the SnK group with coding and general advice.

While both projects note that they don’t feel what they’re doing falls into the category of “fanfiction,” the goal of “aiming to stick as close as we can to the main plotlines of the season while still realistically fixing things” is precisely what fanfiction does best.

And as the two projects show, collaborative creativity is something fandom does better than any other game in town.