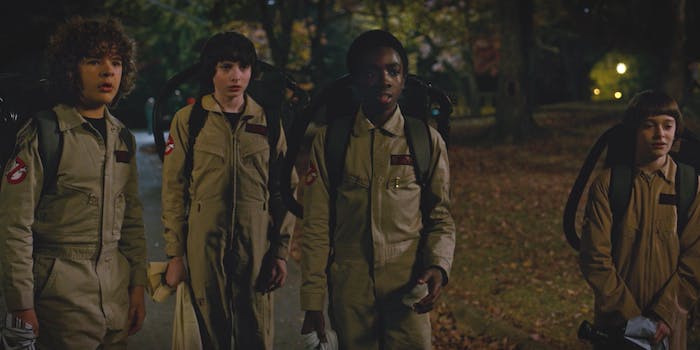 ‘Stranger Things’ got Halloween costume approval from an actual Ghostbuster

Netflix’s Stranger Things literally had to call the Ghostbusters to get approval for the cast members to wear Ghostbusters costumes in the second season of the show.

In a trailer for season 2 released earlier this month on Twitter, the young Stranger Things gang is seen wearing the Ghostbusters outfits as Halloween costumes (0:37).

Showrunners Ross and Matt Duffer told Entertainment Weekly they had to ask permission from Ghostbusters director Ivan Reitman and actor Dan Aykroyd. Matt Duffer said Reitman even saw scripts from the show before he gave his approval.

“We got to talk to Ivan Reitman on the phone because he and Dan Aykroyd had to approve it,” Matt Duffer told EW. “[Reitman] said it was flattering. He had seen the first season or at least had heard of it or pretended like he had. But they were really into being part of the show. Then they sent us all these Ghostbusters toys at the end of the shoot. That’s one of my top five most worn-out VHS tapes.”

The Stranger Things scene takes place on Halloween 1984, the year everyone learned the Ghostbusters are who you call when you have poltergist problems.