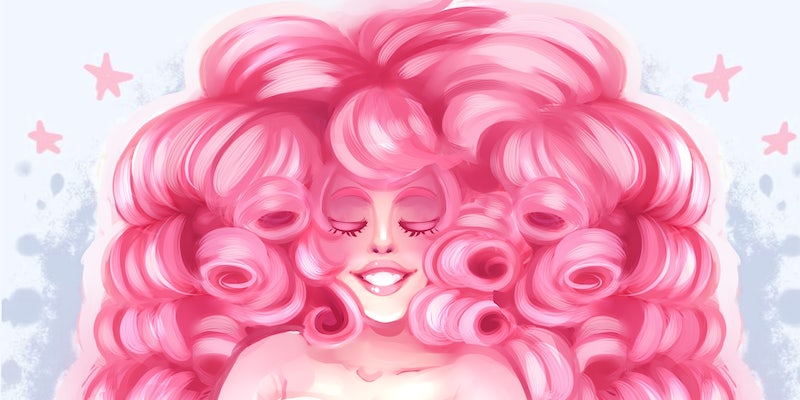 Controversy surrounding a 'Steven Universe' fanartist has spread to the creative team that supported her.

Steven Universe is a beloved animated children’s show known for its smart and progressive depictions of its diverse and lovable cast of characters.

But these positive qualities in the show itself have led to a very ugly turn of events in the Steven Universe fandom, after a beleaguered fanartist said she attempted suicide after being bullied by members of the fandom who felt her art was problematic. In a bizarre turn of events prompted by the ensuing debate over what kinds of fanart are acceptable, some fans have now turned even against the show’s creative team, including show creator Rebecca Sugar.

It all started last week when a fanartist going by the name Zamii caused a scare on Tumblr when she posted an apparent final note to her Tumblr, then disappeared for three days. When she re-emerged, it was to post a tearful video she claimed was being filmed at a hospital where she said she was getting the help she needed.

Prior to Zamii’s alarming initial farewell, members of the Steven Universe and Homestuck fandoms had reportedly created more than 40 critical blogs and other social media accounts directed at her because they believed she was purveying problematic depictions of many of the characters she drew. During her time in fandom, Zamii had been accused of a litany of flawed portrayals of characters, including perpetuating “racism/stereotyping, transmisogyny/transphobia, apologism, incest, pedophilia, fatphobia, and ableism” in her art. For example, when Zamii drew a Japanese character from the popular anime Yowamushi Pedal, she came under fire for giving the character yellow skin and slanted eyes; when she drew a black character, she came under fire for removing her Afro and giving her blonde hair; when she drew a “Native American Fluttershy” from My Little Pony, the response was mixed and often critical, pointing out that she had further stereotyped the character.

While the reasons for some of the criticisms are plain, others were harder to parse. Here’s how one character, Rose Quartz, looks in official Steven Universe (SU) animation: 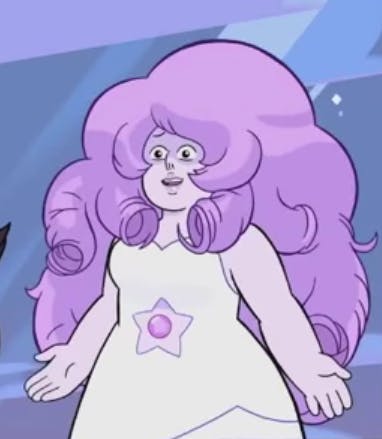 Here’s an example of how she’s drawn in one popular piece of fanart (not by Zamii): 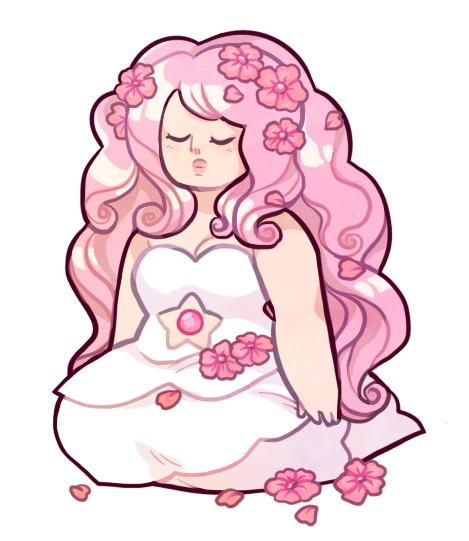 In 2013, Zamii drew this partial view of Rose Quartz which her detractors felt depicted the character as too thin: 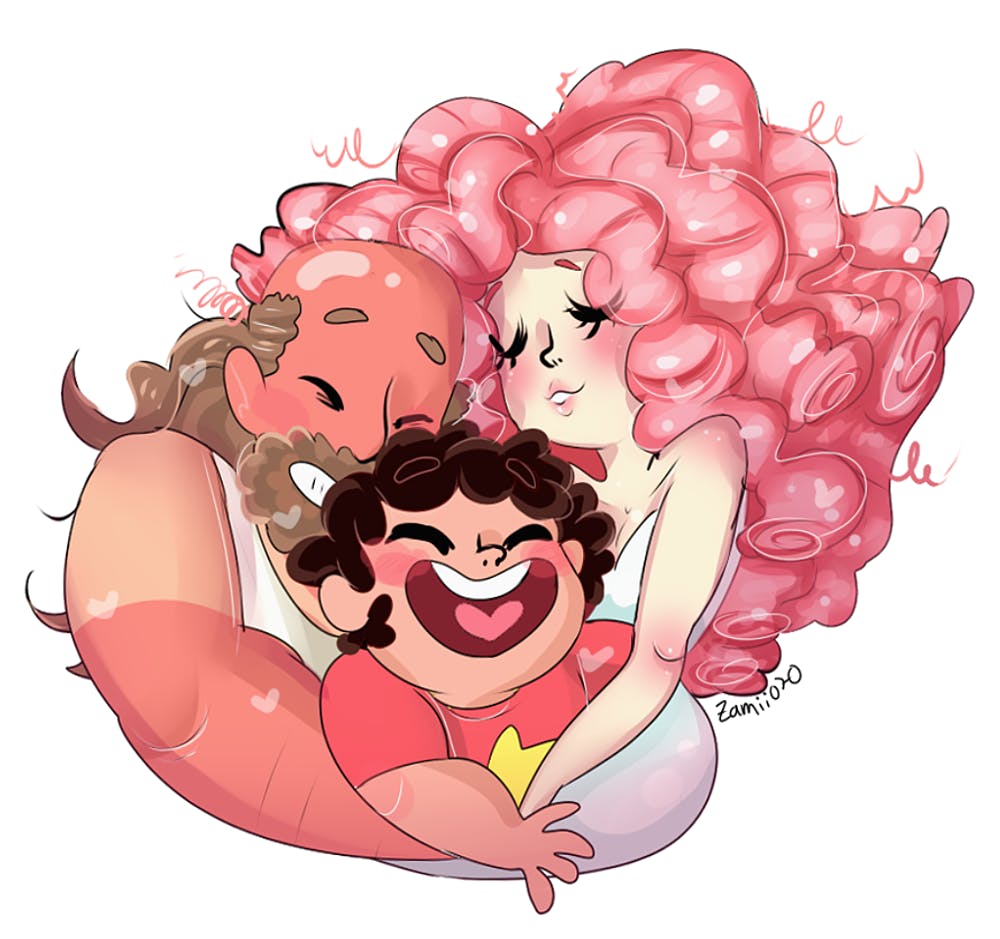 In her more recent art of the character, her detractors continued to accuse her of making the character too thin, tagging her work with “#fatphobia” and other accusatory descriptions, though the artwork doesn’t appear significantly dissimilar to the official imagery from the cartoon. And criticism continued, independent of the size argument: 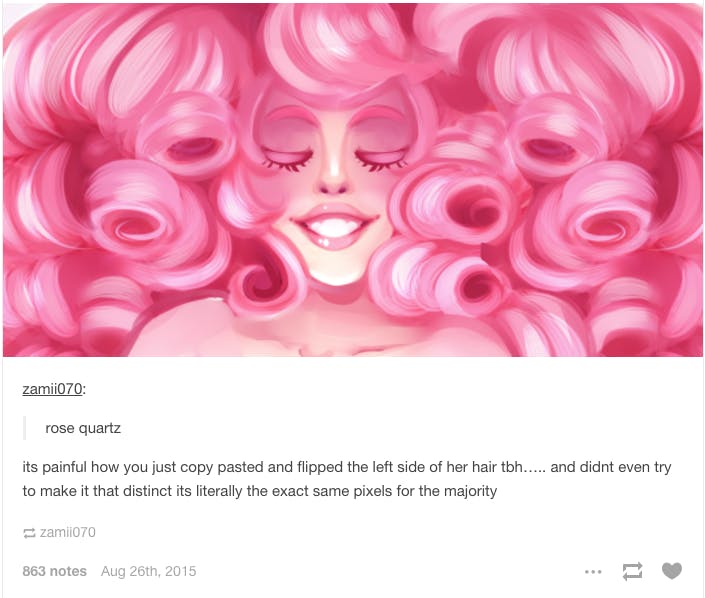 Part of the “evidence” that she was transmisogynistic included her using the words “dude” and “man” as interjectory statements while talking to a woman, then joking about the word use. Over time, Zamii created a list of rebuttals and explanations, including apologies, to many of the accusations of transmisogyny and problematic elements in her art. In response to claims of racism against Native Americans, she wrote, “[I] have apologized for it countless times and have deleted the picture within a few days of posting it.”

It wasn’t enough to halt her feeling that she was being bullied. Though Zamii is recovering—her most recent update was Monday—the concern over the abuse she received has caused a maelstrom throughout her fandoms. A post made last week on Reddit‘s Homestuck subreddit about the situation garnered dozens of supportive comments condemning the culture that motivated the bullying. The Steven Universe and related tags on Tumblr have been overflowing with similar outrage, backlash to the sentiment that harassment and bullying are somehow justified when they’re in the name of progressive ideals. The wave of support for Zamii on Tumblr has led to a paradoxical campaign: Other fanartists are deliberately drawing the character of Rose Quartz as thin in protest.

On the other side of the issue, plenty of people have insisted that it’s more important to continue calling out what they see as problematic behavior—even if that extends to the kind of social ostracism that led to all this to begin with. “Me not being a pushover for oppression makes ME toxic??” wrote one user. “Fuck that.” 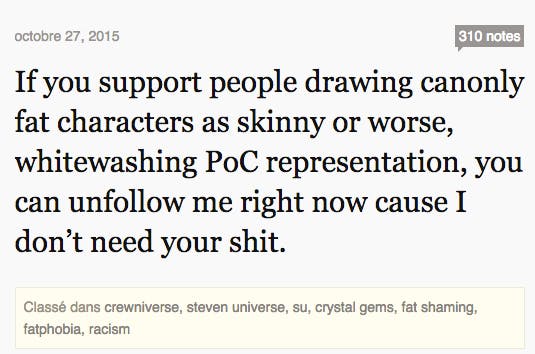 On Sunday night, the turmoil reached the Steven Universe production crew, prompting series co-producer Ian Jones-Quartey to weigh in with a now-deleted tweet, saying artists should be allowed to draw what they want.

The response was immediate:

Jones-Quartey’s comments ushered in a new phase of the debate, as fans began criticizing his comments, along with series creator Rebecca Sugar. Years ago, when Sugar was still just a fan, she created fanart of underage characters, which has suddenly now opened her up to accusations of pedophilia from fans accusing her of creating “child pornography.” The artwork under discussion depicts non-graphic sexual activity between two characters whose ages are ambiguous in a black-and-white cartoon comic. As these fans began to direct criticism toward the Steven Universe creators, other onlookers criticized Tumblr culture itself for being so quick to turn on its own.

Meanwhile, the hateful rhetoric around Zamii’s participation in the fandom continues, with numerous detractors arguing that she was faking her alleged hospital video, and one calling her “an absolute piece of shit.”

It seems the conversation about how to call out problematic tropes without marginalizing or harassing other members of fandom isn’t going to fade quietly away.

Fanartists can create whatever art they want & everyone has the freedom to criticize it for any reason. However, bullying is not criticism.

@ianjq I have listened to concerns and I agree, my earlier statement was vague and reductive. Thank you to everyone who made me aware.