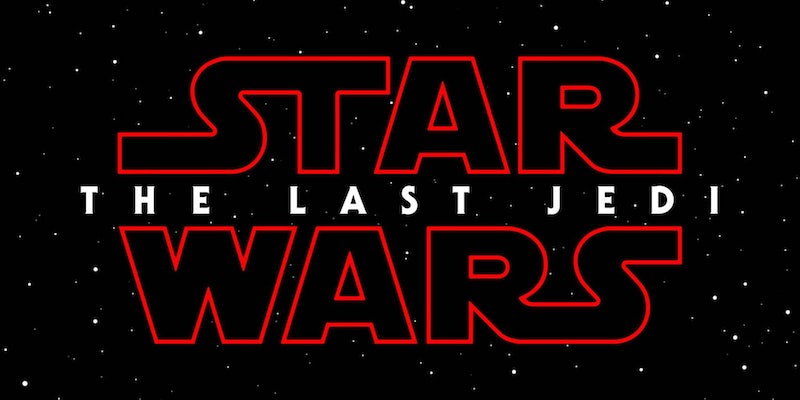 We know little about it, but fans are already digging in deep.

After months of speculation and an intriguing trademark application from Lucasfilm, the name of the next movie in the Star Wars saga is official.

It’s official. STAR WARS: THE LAST JEDI is the next chapter of the Skywalker saga. This December. #TheLastJedi https://t.co/ySkVwQcMTP pic.twitter.com/eHrPgbsRJq

The release and photo demonstrate that Lucasfilm is now labeling the episodic Star Wars films as the “Skywalker saga” to differentiate between the main films and spinoffs like Rogue One. That and title aside, Lucasfilm didn’t reveal any other information, but fans are already analyzing what little there is—and in full force.

Me: That is a good if obvious title for a Star Wars movie.

For instance, why is the Star Wars font red?

Me: That is a good if obvious title for a Star Wars movie.

OH MY GOD WHAT DOES THIS MEAN WHY IS IT RED AAAHHHH @SKRISHNA pic.twitter.com/AKIEobXpxw

As some have pointed out, it’s not the first time Star Wars has used the color.

As a refresher, the red font is nothing new: #StarWars #TheLastJedi pic.twitter.com/gEVlXDFAFl

Loving the red font too, although it’s typically used for the finale chapter of each trilogy… #StarWars #TheLastJedi pic.twitter.com/D77i635YtJ

Star Wars: The Force Awakens ends with Rey presenting Luke Skywalker with his old lightsaber on Ahch-To, and we know that The Last Jedi will pick up right where it left off. Now fans are asking, well, who is the last Jedi? Is it Luke, Rey, both of them, or somebody we’re not expecting?

SO IS LUKE THE LAST JEDI OR IS IT REY pic.twitter.com/UJjrPp7BCp

Just remember Yoda says to Luke, “when I am gone, the last of the Jedi will you be.” The title is almost definitely an allusion to Luke.

the last jedi.. who is it gonna be? luke? rey? no one knows pic.twitter.com/6lckaCkV2v

Just to clarify, Jedi is both singular and plural, although a deleted tweet from Star Wars Brazil’s account seemed to indicate that Jedi was singular—and referred to someone who was male.

Director Rian Johnson has said the title of The Last Jedi has been part of his script since the first draft, so we’re especially curious to see where it goes. Even more impressive is that someone guessed the correct title a year ago. It’s also the name of a Star Wars Legends novel, which is no longer considered canon by Lucasfilm.

It wouldn’t be a Star Wars title reveal without its own set of memes. We only just learned the title so we’ve got a while to gear up, but the early contenders are especially strong (and topical).

“Return of the Jedi”

We’re not getting Episode IX for years, but fans already collectively agreed on what to call it.

Episode IX: The Rebranding of the Jedi