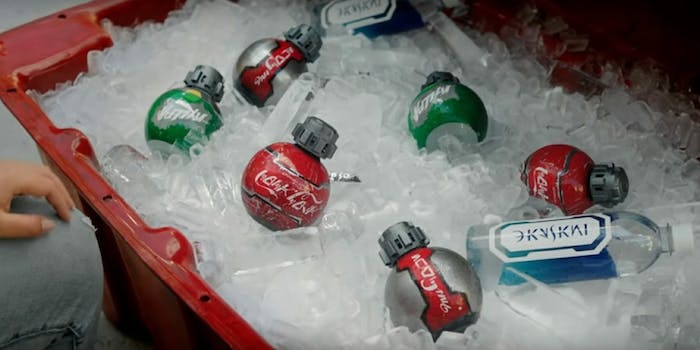 Disney had to find a canon explanation for why it's there.

The new Star Wars theme park, Galaxy’s Edge, is a fully immersive experience, going beyond the typical Disney method of hiring actors to play popular characters. Set on the planet Batuu, the park tells a specific narrative taking place between The Last Jedi and The Rise of Skywalker. It’s meant to feel like visiting a frontier outpost within the Star Wars universe, populated by distinct characters with their own backstories and motives. That means it’s an official part of Star Wars canon, which introduces some interesting problems. Namely, how do you handle the inevitable cross-contamination between Star Wars and real life?

One of the funniest examples has got to be Coca-Cola, which now exists in the Star Wars universe. The films’ fantasy setting made it a rare Hollywood franchise without on-screen product placement, but there’s a limit to the number of canonically accurate snacks and beverages you can serve at a theme park. Most people will want familiar, non-alien food, so Disney had to figure out a way to sell Coke on Batuu.

This perfect storm of commercialism led to this ad, where a woman steals a drink from a pair of stormtroopers. On Batuu, Coke arrives in a grenade-shaped bottle, labeled in Aurebesh letters that look recognizably like the Coke logo.

Fans have been poking fun at this idea on social media, pointing out that high-fructose corn syrup is now an official element of Star Wars canon, and that Coca-Cola now has its own entry on the obsessively-detailed Star Wars wiki, Wookieepedia. “Coca-Cola was a beverage served at Kat Saka’s Kettle in Black Spider Outpost,” reads the Wookieepedia page, in classic deadpan style. (All entries are written in past tense, because Star Wars takes place in the past.)

One Lucasfilm creator gently suggested on Twitter that while customers at Galaxy’s Edge are obviously drinking Coke, the canon explanation is that there’s a separate in-universe beverage that happens to be served in a red container, creating a distinction between canon and real life.

The Star Wars Coke bottle situation feels instinctively ridiculous, and it takes a moment to realize why: it brings together the two clashing sides of the Star Wars franchise. On the one hand, this is a meticulously detailed fantasy that fans love deeply, which is why people care so much about what is and isn’t canon. On the other hand, it’s one of the most blatantly commercial media franchises on the planet. In-universe Coke branding is a way to smooth over the link between these two facts, and hey, the design is pretty convincing.