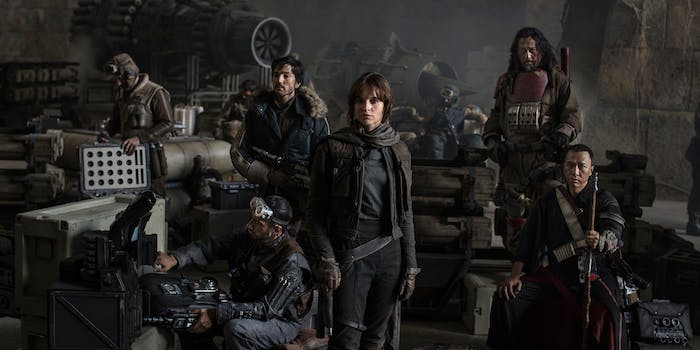 It's a good day for 'Star Wars' fans.

Disney announced a flurry of Star Wars news at the 2015 D23 Expo that will leave lovers of the franchise starry-eyed.

First off, the Star Wars universe will come alive, with both Disneyland and Walt Disney World getting Star Wars-themed lands. It’ll be the largest themed land expansion ever, with 14 acres of area each.

Coming soon to a Disney Park not so far, far away: #StarWarsLand. pic.twitter.com/hkdYooAqLU

"Today, I'm thrilled to announce the next chapter between Disney Parks and @StarWars." —Bob Iger #D23EXPO

There’ll be a never-before-seen planet and remote trading port, and fans will also be able to sit behind the controls of the Millennium Falcon, one of the franchise’s most iconic vehicles.

Rogue One, which centers around a group of resistance fighters who have banded together to steal plans to the Death Star, takes place before the events of Star Wars: A New Hope and is directed by Gareth Edwards. It’s slated for release on Dec. 16, 2016. The movie’s logo was also revealed.

Next up: @StarWars #Rogue1! #D23Expo pic.twitter.com/PzstaD1PIb

The poster for Star Wars: The Force Awakens was also unveiled at D23. It comes from artist Drew Struzan, the man behind the most famous posters for the original Star Wars and Indiana Jones trilogies. Episode VII‘s Finn, Rey, Kylo Ren, and Han Solo can be seen on the poster, along with some lightsaber wielding.

Furthermore, it was announced Jurassic World director Colin Trevorrow will be directing Episode IX, set to be released in 2019.