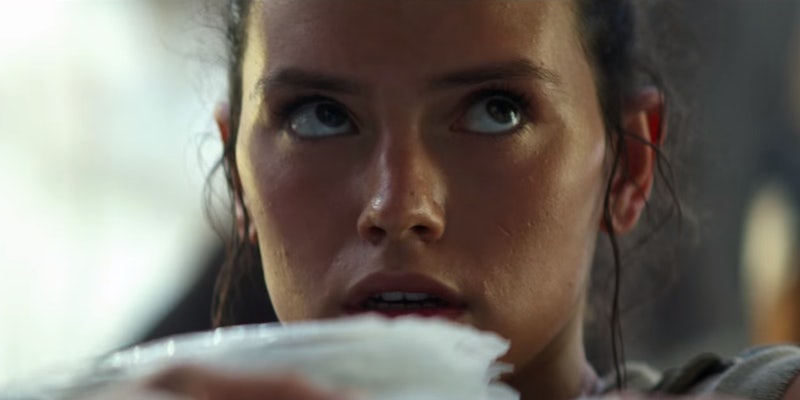 10 things we learned about ‘Star Wars: The Force Awakens’ from the novelization

If you only watched the movie, you missed several important details.

Star Wars: The Force Awakens didn’t just delight audiences and smash box-office records. It raised many, many questions. Some of those questions won’t be answered until Episode VIII in 2017, but The Force Awakens‘s novelization, published on Dec. 18 by Random House, reveals that there’s much more to the characters and situations in the story than the film alone suggests.

Here are our biggest takeaways from the book, written by Alan Dean Foster, who ghost-wrote the 1977 Star Wars novelization. It’s worth noting up front that movie novelizations are only canon where they don’t contradict the movies themselves, but we believe that all of these takeaways fit that description.

One of the biggest questions about the current state of the Star Wars universe is who knows what about the events of the previous movies. For example, who knows that Luke Skywalker and Leia Organa are brother and sister, the children of Darth Vader? And, perhaps more significantly, who knows that Vader betrayed Emperor Palpatine, saved his son Luke, and ultimately helped the rebels win the Battle of Endor in Return of the Jedi?

While it’s unclear which of the good guys know this latter secret, the novelization reveals that Snoke, the Supreme Leader of the First Order, and Kylo Ren, his pseudo-apprentice, are aware of Vader’s sacrificial act. Snoke calls it a “foolish error of judgment,” and Ren derisively labels it “sentiment.”

“Had Lord Vader not succumbed to emotion at the crucial moment—had the father killed the son—the Empire would have prevailed,” Snoke says. “And there would be no threat of Skywalker’s return today.”

2) There’s someone important on that Republic Senate balcony

Just before Starkiller Base destroys the Hosnian System—including Hosnian Prime, the capital of the Republic—the camera pushes in on a balcony full of well-dressed people, including a young black woman in a uniform. Although the movie doesn’t explain who that is, the novelization reveals that the character, played by Maisie Richardson-Sellers, is Korr Sella, General Leia Organa’s envoy to the Senate.

Before the discovery of Starkiller Base, Leia, the head of the Resistance, sends Sella to petition the Republic for help in the fight against the First Order. Leia can’t go herself, she tells Sella, because the Republic capital world isn’t safe for a political pariah like her. (The Republic, which signed a treaty with the First Order after Return of the Jedi, publicly disavows the Resistance’s unsanctioned conflict with it.)

While the Resistance will mourn Sella’s death, all will agree that things would be far worse if Leia had gone herself.

When Finn, Rey, Han Solo, and BB-8 enter the castle of pirate leader Maz Kanata on Takodana, two people surreptitiously report to their masters the presence of the droid, which is carrying vital information. One of them, another droid, relays the news to the Resistance, which leads to the last-minute arrival of Poe Dameron and his X-wings to drive back the First Order troops who arrive to capture BB-8.

Why did the droid in Maz’s castle know to be on the lookout for BB-8? The novelization reveals that C-3PO activated the Resistance’s far-flung network of droid allies to search for the ball droid. C-3PO was supposed to activate a tracker on BB-8 before it left with Poe at the beginning of the movie, but in a rare moment of absent-mindedness, he forgot. Luckily, the golden droid redeemed himself.

The movie shows Han and Leia discussing their son Ben’s fall to the dark side and transformation into Kylo Ren at the hands of Snoke. What it doesn’t show is Leia admitting that she knew Snoke was watching Ben from afar.

“He knew our child would be strong with the Force,” Leia says. “That he was born with equal potential for good or evil.”

When Han asks why Leia kept this from him, she replies, ” I was hoping that I was wrong, that it wasn’t true. I hoped I could sway him, turn him away from the dark side, without having to involve you.

“I was afraid that your reactions would only drive him farther to the dark side,” she adds. “I thought I could shield him from Snoke’s influence and you from what was happening.”

In a moment reminiscent of Obi-Wan Kenobi telling Luke about his failure to train Anakin, Leia says, “It’s clear now that I was wrong.”

In the movie, it isn’t clear what’s going through Kylo’s mind after he stabs his father through the chest with his lightsaber. The scene quickly shifts gears, and Kylo, wounded by a shot from an enraged Chewbacca, snarls up at Finn and Rey from a crouched position before the two heroes flee.

In the novelization, Kylo feels “stunned by his own action.”

“Following through on the act,” the narration says, “ought to have made him stronger, a part of him believed. Instead, he found himself weakened.”

Foster wrote the novelization based on a version of the script that later underwent significant revisions. It’s possible that the discrepancy between page and screen here is not a casual inconsistency but a deliberate choice—that J.J. Abrams and company didn’t want to suggest that Kylo felt conflicted after the fact. Of course, given how difficult it is to visually convey an internal monologue, it’s also possible that this moment wasn’t so much deliberate struck as overlooked for simplicity’s sake.

6) The Resistance is tiny

It’s hard to get a good sense in the movie of how big the Resistance is. In A New Hope, we only follow the exploits of one segment of the Rebel Alliance; the massive fleet in Return of the Jedi shows us how small a piece of the puzzle we were glimpsing in the previous two movies. But if the novelization of The Force Awakens is to be believed, the Resistance is much, much smaller than the Rebel Alliance.

After Poe and his X-wings destroy a key component of Starkiller Base, Leia warns him to take his fighters and flee before the First Order can further reduce their numbers.

“Outside of those of us here,” she tells him from the base we see in the movie, “your group is all that remains of the Resistance that’s capable of putting up a fight.”

That’s quite a revelation. It is suggested elsewhere in the novelization that the First Order has a technological advantage over the Resistance, especially in terms of its capital ships. Even 30 years after the Emperor’s dramatic defeat, the fight for the galaxy’s future is as asymmetric as it’s ever been.

Rey’s triumph over Kylo in their lightsaber duel is widely considered one of the film’s greatest moments. But what you don’t fully see on-screen is that, standing over a defeated Kylo, Rey faces a final challenge. The novelization portrays it thusly:

Kill him, a voice inside her head said. It was amorphous, unidentifiable, raw. Pure vengeful emotion. So easy, she told herself. So quick.

Instead of killing Kylo, Rey “recoil[s]” from the feeling, which the narration describes as the pull of the dark side.

This is a very significant moment. Every Force-strong Star Wars hero faces this kind of challenge. When the narration refers to “pure vengeful emotion,” it’s important to remember that part of what drove Rey was seeing Kylo brutally defeat her new friend Finn. She had just seen Kylo deal Finn what might have been a killing blow. She was no doubt furious in that moment—the perfect target for the lure of the dark side.

This is, in essence, the dark side’s modus operandi. It’s how Anakin Skywalker began his fall in Attack of the Clones, when he slaughtered a village full of Tusken Raiders after they kidnapped his mother, who died in his arms.

But Rey, like Luke, is stronger than Anakin. She resists the urge to deliver her own killing blow. In the movie, a chasm quickly opens up between her and her vanquished foe, appearing to foreclose the possibility of her killing him. In the novelization, she makes her choice before that happens. She runs to Finn, to her friend, instead of yielding to her rage. In refusing the dark side, she has just taken the biggest step of her life.

The novelization, unlike the movie, emphasizes Kylo’s quest to figure out who Rey is. He can’t believe that she’s just a random scavenger. When she retrieves Luke’s lightsaber with the Force to commence their duel, he mutters to himself, “It is you.”

This disturbs Rey, who observes to herself that Kylo “seemed to know more about her than she did about herself.”

Rey’s lineage is perhaps the most feverishly discussed aspect of this new Star Wars era. Kylo’s recognition of her suggests that they have met before, although it’s not clear where or when. Some fans think that she’s Luke’s daughter, and that she was with her father when Kylo, then Luke’s student, betrayed him and slaughtered the other students.

No matter who Rey is, it’s clear that Kylo has either met or heard of her before—and that can only mean big things for the former scavenger.

9) Rey and Poe do meet—awkwardly

Whether for better or worse, everyone is wondering about—and betting on—the possibility of a relationship forming within the core trio of Rey, Finn, and Poe. The movie winks at the possibility of a Rey/Finn relationship, and the novelization offers even more hints of one. But the novelization also gives Rey/Poe fans some material by introducing them to each other in a somewhat intimate way.

After R2-D2 completes the map to Luke at the end of the movie, everyone in the briefing room starts cheering and hugging. “No one paid any attention to who was hugging what representative of whichever species,” the narration remarks. “Rey and Poe were not excluded, though their sudden, tight clinch of shared excitement led to a moment of mutual awkwardness.”

“Uh, hi,” the pilot mumbled. “I’m Poe.”
She nodded slowly, searching his face and finding that she liked it. “I recognize the name. So you’re Poe. Poe Dameron, the X-wing pilot. I’m Rey.”
“I know.” He smiled back, a little more at ease. “Nice to meet you.”

“Searching his face and finding that she liked it”? If that’s not catnip for fanfic writers, nothing is.

One of the more confusing aspects of The Force Awakens is what prompts R2-D2 to awaken from his self-imposed electronic exile. As far as we know, droids can’t be Force-sensitive, so it’s not like R2 sensed Rey’s presence and realized that it was time to guide her to Luke. What, then, woke R2 up?

According to the novelization, R2 overhears Resistance leaders discussing the map to Luke—which is really a map to the first Jedi temple—including Rey saying that the First Order “extracted it from the Imperial archives.” Because R2, according to Abrams, “downloaded the archives of the Empire” onboard the Death Star, he had the map files that Kylo mentioned to Rey while interrogating her.

As this strategy session plays out in the novelization, “no one noticed that a light had come on atop a small R2 unit shoved back among the rest of the equipment in the room.”

In the movie, the first mention of the Empire’s files near R2 comes much earlier. Abrams says that it “triggers something that would ultimately wake him up,” meaning that, unlike in the novelization, the wake-up process in the movie is slower. But at least both Abrams and the novelization agree that the mention of Imperial records is the key moment.