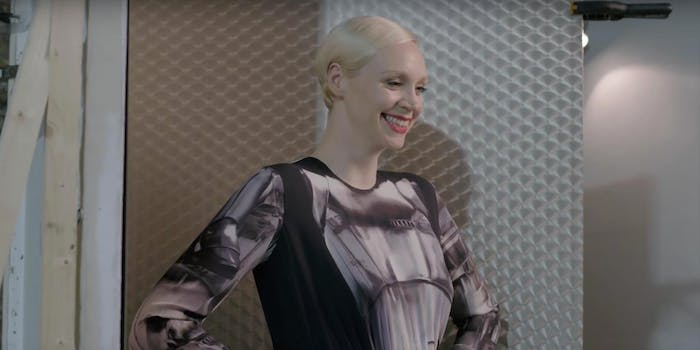 The stunning dress is part of the Force 4 Fashion charity initiative.

The woman behind Star Wars: The Force Awakens’ Captain Phasma exchanged her armor for a stunning dress inspired by her character as part of an exclusive Vanity Fair photo shoot.

Game of Thrones star Gwendoline Christie, who plays the imposing First Order stormtrooper captain in the new film, posed for photographer John Akehurst while wearing the Phasma-inspired gown, one of 10 designs created for Force 4 Fashion, a charity initiative from Disney and Bloomingdale’s.

Giles Deacon designed the dress to feature elements of the character’s already recognizable armor. Deacon told Vanity Fair that “the idea was to make a beautiful, feminine standout dress rather than just to replicate the original design.”

Exclusive look at Gwendoline Christie's Captain Phasma . . . in a dress. Click the link in our bio to see more from our high fashion #StarWars photo shoot. Photograph by @AkehurstJohn. #force4fashion

Christie modeled the dress in a number of poses, including one in which she held the actual blaster that she used in The Force Awakens.

“I loved that the design of Captain Phasma’s costume had been so inventively worked into the dress design,” she told Vanity Fair. “[I] adored that so much drama could be created with just one move—much like Captain Phasma!””

The actress also discussed her character and the dress she inspired, saying she loves the stormtrooper captain because, to Christie, she represents “a progressive female character in our mainstream media.”

Captain Phasma is one of many reasons fans are excited for the release of The Force Awakens this month, and these fun photos make it even more thrilling that Christie is now part of the Star Wars universe. It’s also nice to see her get to wear a dress that her character inspired before that character has even appeared on theater screens.

We always love seeing unique geek fashion, but seeing it on the actress whose character inspired it is even better!

You can see more photos from the shoot on Vanity Fair’s website.