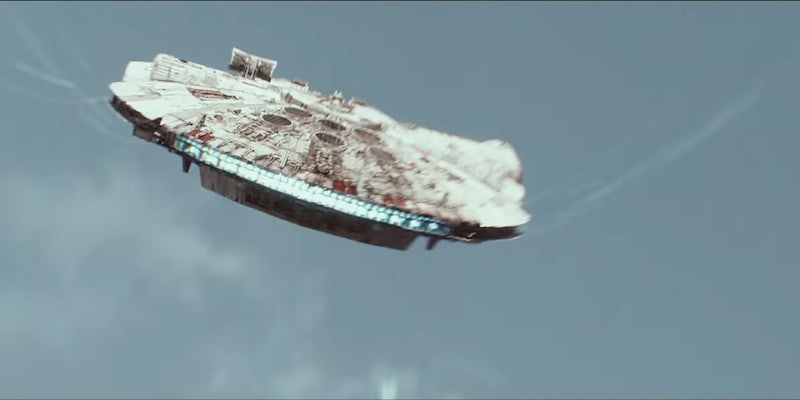 This trailer will help you piece together part of the plot of 'The Force Awakens.'

The new Chinese Star Wars trailer is one of the most comprehensible so far, following part of The Force Awakens‘ storyline instead of just cutting together random scenes.

One week out from the film’s release, Disney is still keeping a tight lid on spoilers. But for the first time, we can piece together part of the film’s timeline from this trailer. Along with some of the footage we’ve already seen, we can now deduce that the evil First Order attacks the desert planet Jakku, causing Rey, Finn, and BB-8 to flee the approaching TIE fighters in the Millennium Falcon. At one point, the Falcon also crashes on a snowy planet, which we assume is where Finn and Rey face off against Kylo Ren and his crossguard lightsaber.

The trailer features an introduction by none other than Luhan, of superstar K-pop boy band Exo, whose recent video “Lightsaber” is an official collaboration with Lucasfilm. The unexpected partnership led to actor John Boyega (Finn) joking about joining the band during a trip to Seoul this week.

Lord. Thinking to audition for EXO so I can join them and have an excuse to stay in Seoul.

Judging by Boyega’s next tweet, however, even he wasn’t expecting the intensity of the reaction from Exo fans. Even compared to the fever-pitch of excitement around The Force Awakens, Exo fandom can apparently give Star Wars a run for its money.

Actually I'll leave EXO alone they don't need me stumbling around while they glide on the screams of their hardcore fans.