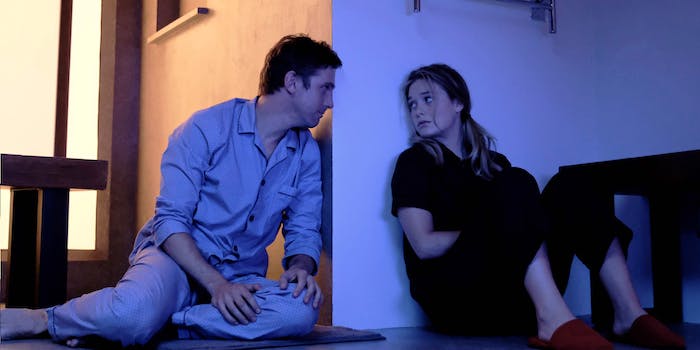 Interview: How ‘Dark Side of the Moon’ shaped the music of ‘Legion’

Russo also works with showrunner Noah Hawley on Fargo, and they bonded over The Dark Side of the Moon for the 1970s-influenced tone of Legion. We spoke to Russo about how music shaped the multisensory experience of Legion, touching on Pink Floyd, auditory hallucinations, and Noah Hawley’s very specific music taste. You can listen along with the soundtrack playlist and Russo’s original score on Spotify.

Legion’s atmosphere is intentionally confusing because the lead character’s viewpoint is so unreliable. How do you use music to help create that unsettling environment?

One of the things I talked about with [Noah Hawley] was to create music that sets the tone and the audience off balance. I would use multiple key structures in the same piece. A lot of dissonance, and a lot of key changes that are subtle so you don’t really recognize that it’s a key change. I go from playing with a synthesizer, and then I morph that into playing the same piece of music with the orchestra, but in an adjusted key.

Not to mention a bunch of atonal music as well, which is stuff that’s just not meant to be played together. That’s sort of what’s happening in David’s brain.

I read that The Dark Side of the Moon was a big influence on your work for this show. Could you tell me a bit about that?

The very first thing I did was find a synthesizer called a Synthi, made by EMS, which was the synthesizer they used on Dark Side of the Moon. I wanted to get a very authentic sound, so I found one in Florida and bought it.

Along with that synth, were there any other peculiar instruments you decided to bring in for this show, that you hadn’t used before?

In the finale, we open with a solo harpsichord piece that I wrote. I found and rented a classic harpsichord from the 1800s and brought it into the studio. So I would say that’s a pretty odd instrument for a television series. And then there’s a lot of these orchestral effects and quartet effects, that I would say are definitely left of center. Not to mention what we did for episode 7, which was this big takedown/remix/reimagination of [Ravel’s] Bolero. I did a very electronic version of that piece that we then merged with the London Symphony Orchestra’s version, and ended up with something I affectionately entitled “Fauxlero.”

A lot of sound design elements as well. I put violin bows on bed springs, bowing metal and stuff like that to give this ambient texture that is very off-center.

It’s interesting to hear you talk about using this old instrument along with the more ’60s and ’70s music, because there’s this kind of ambiguous time period in the show. Were you thinking about that while working on the music, or is that something that came in with the visual style later on?

That was something I thought about from the very beginning. The idea was not to let it sound like it’s from any particular time. You’re really not supposed to know when we take place. There’s this ’60s mod element to the way we look, but there’s also some very modern aspects. It wasn’t supposed to sound like a nostalgic score.

Before you started working on the show and you were talking things over with Noah Hawley, what discussions did you have about your vision for the show?

What was your involvement with the soundtrack elements that are not by you? Is that something you were involved with, or is there a music supervisor who was selecting those tracks?

There’s a music supervisor, but Noah is very clear on what he wants. Occasionally he’ll pick songs and he’ll call me and say, what do you think of this? Or, does this work with the score. But other than that, I’m not really involved with choosing the songs. That’s mainly him and our music supervisor Maggie Phillips.

So, finally, have you started work on any ideas for season 2?

Well, no. I just started work on Fargo season 3, so I’m in the middle of writing and finishing the ideas and themes for that show. And we won’t get started back with Legion… we start shooting in July, so I’ll get started thinking about what those themes are going to be in June.