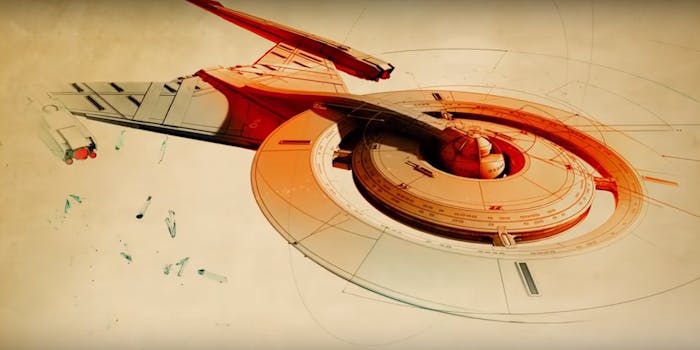 The ‘Star Trek: Discovery’ credits are packed with symbolism

It's full of callbacks to the 'Star Trek' franchise.

Star Trek shows are known for their long opening credits, usually involving space travel and epic music (or in the case of Enterprise, a widely derided cover of a Rod Stewart song.) Star Trek: Discovery went for a welcoming mix of old and new, combining an orchestral theme with nostalgic visuals from the Star Trek universe.

Composer Jeff Russo pays tribute to the Original Series theme music, accompanying diagram-style representations of the U.S.S. Discovery, Starfleet equipment, and a Klingon bat’leth. One of the locations is a real place (the Victoria crater on Mars), while others are more fantastical. Will the Discovery actually encounter a giant, grasping plant, or is that just a callback to the kind of thing we’d see in TOS? Most likely the latter. On a more symbolic note, the final shot is a reference to Michelangelo’s The Creation of Adam, with two humanoid hands reaching out to make contact.

All in all, it’s closer to the title sequences for contemporary shows like Westworld than the classic credits of previous Star Treks. But that feels appropriate for the tone of the show, which follows the ideals of earlier installments while still being a stylistic departure. It’s more of a big-budget prestige drama than an “alien of the week” sci-fi series, and now it’s got a title sequence to match.

You’ll also notice that specific name credits are missing from this video, because the cast is somewhat… malleable. We’ve already seen some character deaths, and we suspect there’s more to come.