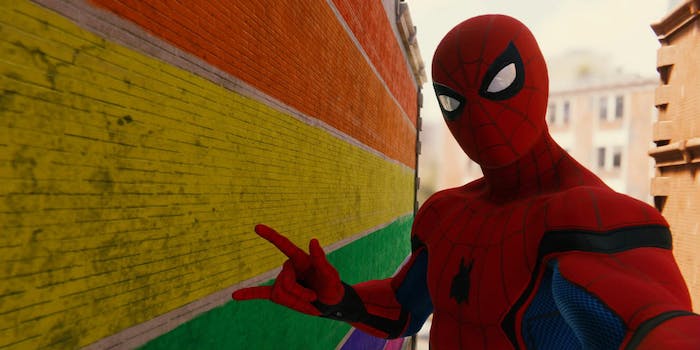 There’s a lot to be happy about with Marvel’s Spider-Man, the new web-slinging superhero video game from Sony and Insomniac, The Daily Dot’s AJ Moser called it “the most authentic Spider-Man game ever made,” and fans of the wall-crawler have another reason to be cheerful, as several LGBTQ Pride flags are seen waving proudly in the New York City air.

Since the game was released on Friday morning, fans have only had a little bit of time to digest it, but plenty have already noticed the Pride flag jutting from a few buildings, as well as appearing in a massive mural on the side of another. Eisner Award-winning writer Saladin Ahmed was one of the first to kick off the trend of calling out the flag throughout the game’s several districts.

Wow. I stopped to perch on a building in #Spidermanps4 and looked over and saw this.

Thinking about all the 12-year-old kids who will be playing this game and seeing this in towns where it's not safe to put that flag up. pic.twitter.com/QGr1Q7QrxZ

It's funny, I wasn't NEARLY as salty about New York game map details when I was watching Andy play The Division, but somehow this game has like turned me into an extra from the first Spider-Man movie shouting "IT'S OUR CITY" at the Green Goblin or whatever

Some Twitter users have (rightly) pointed out that the inclusion of the Pride flag is, in some ways, merely playing catch up with the real NYC, which is home to one of the biggest Pride Parades each year. More than 40,000 people attended last year’s Pride March.

What's interesting is this *is* great and noteworthy, but it's also the case all you need to do to contain this moment is…accurately represent New York City and its buildings

Video games have managed our expectations until we *expect* the queerness bowlderized out of real world https://t.co/7Zzqk4T1Qj

That said, the inclusion of the Pride flag also has lots of positive repercussions for those playing the game in communities or countries that are less welcoming of LGBT people. Seeing one of the most densely populated locales in the world embrace the LGBT community has the chance to give disadvantaged LGBT youth some solace.

Daily Dot’s AJ Moser (also a NYC resident) said he noticed most of the flags in the Lower East Side, where many real-life flags can be found.

You crazy kids, being shocked that Spider-Man can perch atop a gay pride flag in the new game. Don't you know the Parkers have been allies since before it was cool? (Words: @straczynski, Pencils: John Romita Jr.) pic.twitter.com/tkGf1y7eDx

It’s not currently clear how many Pride flags there are around the game’s version of New York City. In my own few hours with the game, I’ve spotted several in and around more residential districts, but it stands to reason that there could be a ton more. Rumor has it that one of the game’s achievements relies on taking a selfie with one of the pride flags (or perhaps the mural) with the game’s photo mode.