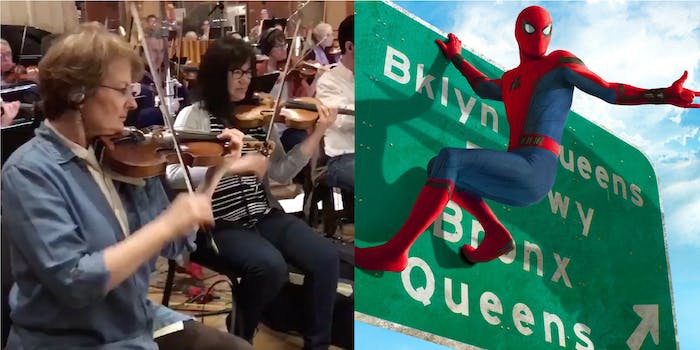 The classic 'Spider-Man' theme could be avenged.

Is there anything more pure than watching professional orchestral musicians tearing up a piece of classic Americana? Just take these violinists mastering this new cover of the Spider-Man theme song for Spider-Man: Homecoming.

On Friday, Michael Giacchino, the composer scoring the upcoming Spider-Man film, shared a video clip of an orchestra recording an earnest cover of the cartoon show’s classic theme song from 1967.

The video shows us a much calmer, jazzier return to the original theme compared to composer Danny Elfman’s dramatic, secret agent-esque main theme from the original film trilogy, which ws filled with Elfman’s notorious love for blaring horns and minor chords. Of course, the video is just raw instruments, pre-production, so this speculation comes with some well-intended grains of salt—we guess Spider-Man fans will just have to wait for the film’s release in July.

Watch the sneak peek below: