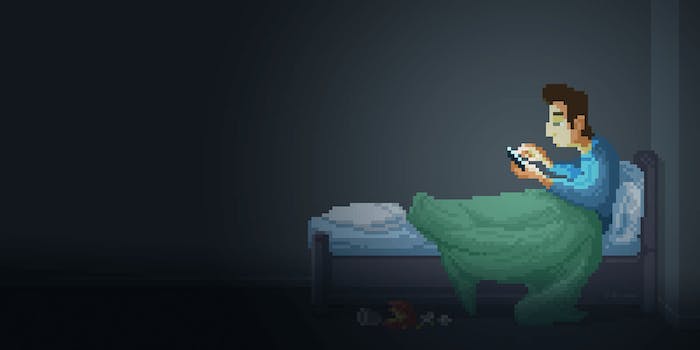 What a jetlag app is teaching scientists about our sleep habits

For hundreds of thousands of people, the mobile app Entrain helps figure out the most efficient way to recover from jet lag after traveling. But some users opted-in to a second use for the app: science.

Researchers asked users if they would like to submit their sleep data to a citizen science project run by University of Michigan mathematicians. Around 10,000 did, hailing from all corners of the globe.

The researchers, who published their data open access in the journal Science Advances, found that while people tend to rise when their circadian rhythm tells them to, they usually to ignore their body’s internal clock’s signal to go to bed. The trend persisted across cultures, ages, and between genders. The researchers attributed this difference to societal pressures to go to bed later, but couldn’t speak to precisely what those pressures were since that was not part of the data they collected.

Instead, they compared the user data to a mathematical model.

The mathematical model, initially designed by a different team of researchers, is built on the biology of people’s natural sleep rhythms. Over the course of the day, biological drives to stay awake and fall asleep rise and fall, triggered numerous cues that include light levels. The result is a prompting a natural cycle that is more or less tied to sunrise and sunset. The model is essentially what our sleep-wake patterns would probably look like in the absence of any cues from society.

Mathematical modeling helps researchers discern the signal from the noise in big data sets such as those from citizen science.

“In the data, you can just be running into various correlations left and right, and math modeling is this tool you can bring in to weed out the bad correlations,” Olivia Walch, lead author to the study and the developer of Entrain, told the Daily Dot in a phone interview. For example, if a trend appears in the data, but falls apart when it’s compared to the mathematical model, then it’s either not really there—or it may suggest the model is wrong, Walch explained. “The modeling lets you interrogate the trends in a whole new way.”

She added that the app itself helps users provide the scientists with accurate data about their sleep patterns. Entrain’s primary function is to help people get over jet lag by giving them schedules in which they should try to stay away from light to help adjust to a new time zone. But if the users don’t give accurate data, then the schedules won’t be optimal and can make adjusting to the new time zone harder.

Despite the data’s high level of accuracy to each user, it can only speak to patterns of sleeping and waking. The app collects demographic data like country of origin, age, and gender. Walch said users can also keep a daily diary where they can track their light levels throughout the day.

They found that people who spend more time outdoors tended to sleep more and go to bed earlier than people who spend their days indoors. They also found women, on average, sleep 30 minutes more than men. Walch’s favorite result, she said, was that as we get older, the window in which we can fall asleep seems to close.

She said that previous sleep data suggested this trend, but there had been little follow-up. Not for lack of interest, but for lack of time and funds.

“The problem with sleep research is that it’s so expensive to take people and have them live in a lab for an extended period of time,” Walch said. “So they only have a limited number of people they can study.”

But with so much data from her app, Walch said she’s designed something of a “hypothesis generating machine.” The mathematical model helps weed out the true trends from the false ones, providing researchers with a more targeted question to answer. Or it can help them see trends they’ve found in small groups of people in a larger data set. “Big data, and cheap ubiquitous tech like a free mobile app can meet [traditional sleep researchers] halfway, provide real-world validation of controlled study results.”