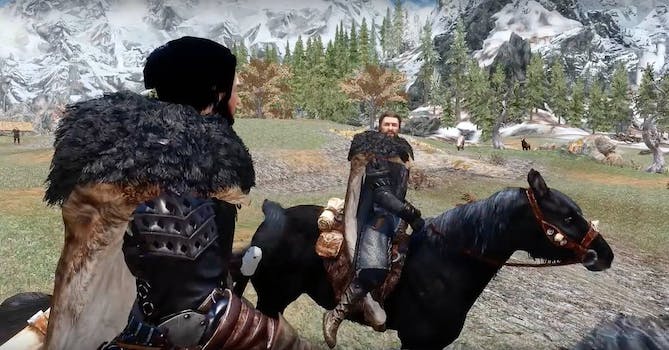 Someone recreated the ‘Game of Thrones’ season 1 trailer in Skyrim

Everyone is so young—and alive.

Game of Thrones fans have come a long way since season 1, but a YouTuber with some serious modding skills is taking us back.

The person behind the channel UpIsNotJump has recreated the Game of Thrones season 1 trailer from 2011 in Skyrim. While the remake uses the original audio, UpIsNotJump had to employ more than 260 game mods to gets the shots as close to the original trailer as possible.

Here’s a look at the original for comparison.

For Game of Thrones fans who are in the midst of debating what’ll happen in season 7 now that the show’s timeline has pulled ahead of the published books, the trailer is a nice visit to a simpler time.

All of the Starks are alive, Daenerys has yet to become the mother of dragons, and Westeros’s leading families are still living in relative peace. Of course some things are the same five years later: The white walkers are still a threat, King Robert Baratheon’s warning about Daenerys attempting to take back Westeros seems even more prophetic, and Jon Snow still knows nothing.

Luckily for fans, it looks like this Skyrim-flavored walk down memory lane will continue. UpIsNotJump plans to keep working with Skyrim (which turns out to be “shockingly perfect for recreating Game of Thrones“) to recreate trailers for season 2 and beyond.

We hope the YouTuber has a mod ready to make it snow, because one thing is certain: Winter is coming.