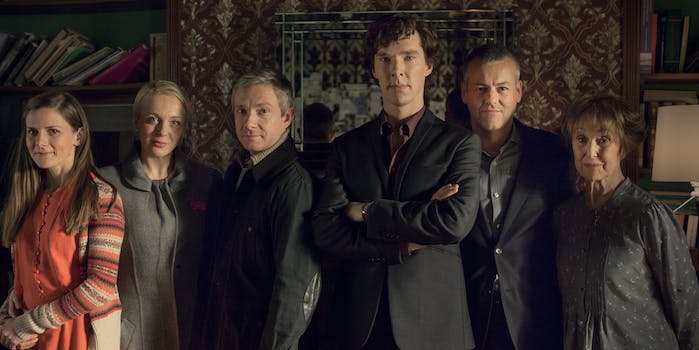 After torture, murder, and interpersonal mayhem, it's hard to imagine things getting worse.

According to Sherlock writers Steven Moffat and Mark Gatiss, the show’s fourth season will be even “darker” and more “devastating” than before.

For context, the third season of Sherlock opened with Sherlock being tortured in a Serbian prison, following his apparent death and the suicide of terrorist supervillain Moriarty. By the season finale, John’s new wife had betrayed him and shot Sherlock in the chest, and Sherlock had killed a man in front of multiple witnesses. But according to a recent interview with Steven Moffat, “We have a plan to top [season three]. And I do think our plan is devastating.”

This seems to be a common theme at the moment, with Moffat’s other show, Doctor Who, also taking a darker tone in its latest season.

anytime steven moffat declares a new series of sherlock or doctor who will be DARKER!!11!! and SADDER!! i just roll my eyes

PhotoManip: My answer to all the talk about how #Sherlock S4 will be so much darker http://t.co/vRkLHpFHa1 ?????????? pic.twitter.com/OpNLMrzjFp

So, how will Sherlock get darker? Perhaps John and Sherlock will investigate someone who tortures puppies and kittens. Maybe the show will get more explicit during the scenes where murder victims are blown up or dismembered. Or, horror of horrors, we’ll finally see Sherlock wind up in jail as a result of one of his many crimes.

Of course, the most likely explanation is that the show will get darker by killing off Mary Watson, thus giving both John and Sherlock some an extra excuse to be angry and miserable. John’s wife dies in the original Sherlock Holmes stories, and the show already has a pretty terrible track record with female characters. But since Steven Moffat likes to pride himself in his unexpected plot twists, he might just surprise us yet.

At this point Mary’s survival would seem relatively “dark” in itself, because it would require John to raise a child with someone who lied to him throughout their relationship, and shot his best friend in the chest.