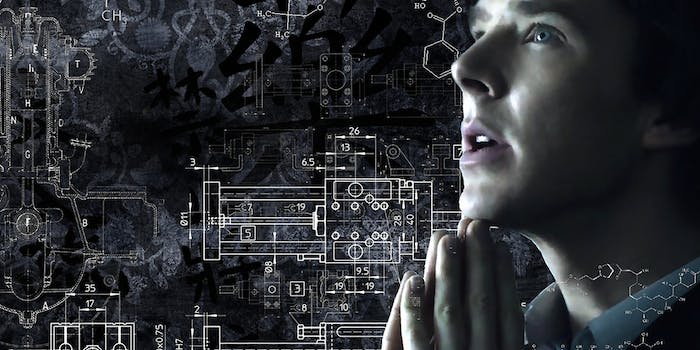 Holmes and Watson have been besties since the late 19th century, so fans should know what's going to happen next on BBC's Sherlock. And what's not going to happen.

Holmes and Watson have been besties since the late 19th century, so fans should know what’s going to happen next on BBC’s Sherlock. More to the point, they should know what’s not going to happen: a romance between Benedict Cumberbatch’s Sherlock and Martin Freeman’s John. But knowing how the story’s supposed to go hasn’t stopped hordes of “JohnLock” shippers from continuing to hope for the series to allow the two roommates to fall in love. And as news about a potential season 3 wedding starts to emerge, they aren’t happy.

When Sherlock‘s producer Sue Vertue tweeted a spoilery picture of a wedding place setting with Sherlock’s name on it earlier this week, it shouldn’t have been that much of a surprise. After all, we knew last August that one of the woefully short season’s three episodes would involve a wedding. And even before that, it was no secret that John Watson marries Mary Morstan. Many adaptations posit that the Watson/Morstan wedding happens while Sherlock is off faking his own death (don’t ask), and it looks as if this adaptation is following suit.

But just days after that revelation, the Daily Mail provided visual indication that Martin Freeman’s longtime partner Amanda Abbington was most likely playing Mary in the third season. Many fans celebrated the news—who better than to play Freeman’s fictional wife than his unofficial real life wife? (The pair have two children together and have been together over a decade.) But many others were upset, because if true, the spoiler could directly sink the “JohnLock” ship, a pairing beloved by legions of eager slash fans, or fans of queer male fandom pairings.

Fans of John/Sherlock have never had it easy. Show creator Steven Moffat has ranged from snarky to baffled to annoyed on the subject of why people love the two men together, despite the fact that people have been postulating that Holmes and Watson were lovers since time immemorial. Cumberbatch and Freeman have both had less-than-charitable things to say about the slash fans at times.

On Monday, the same day that Vertue tweeted out the wedding placemat, Sherlock writer Mark Gatiss’s husband Ian Hallard tweeted, “I get that some people like to fantasise about Sherlock & John as a couple but no one seriously thinks it will actually happen, do they?!” Abbington responded with a couple of tweets on the subject, saying that she found slash fans’ reactions amusing, and that she felt the friendship between the two men was “more interesting” than the queer romance many fans so desperately want. After that, however, Abbington noted that she had received death wishes from angry Sherlock slashers. The news of the death threats rocked the fandom, prompting many JohnLock fans to speak out and issue messages of support. 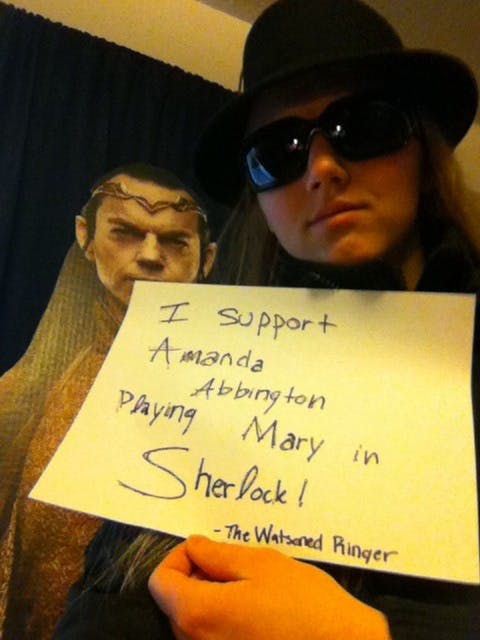 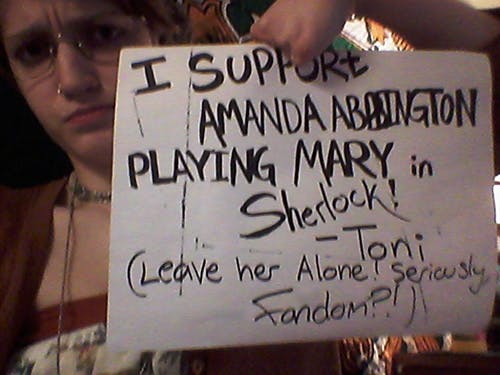 So why all the fuss over one, admittedly popular, pairing that had little likelihood of ever becoming canon–part of the actual show storyline–anyway? After all, traditionally “slash,” the idea of shipping, or being fans of, a male/male pairing, happens because fans believe that two characters intended to be straight are actually queer and in love with each other. Many fans believe that when a pairing becomes canon, like Kurt/Blaine on Glee or anyone from Queer as Folk, for example, that it stops being slash. In other words, to many fans, the whole point is that Sherlock and John can’t be together on the show. For many fans of ongoing series, if your characters end up together in canon, it’s a wonderful bonus, not something that validates the love you already have for the ship.

But things are changing in fandom, and the resistance fans have to the idea of Sherlock and John getting married in Sherlock indicates that the definition of “slash” may be changing for fandom. After all, if Teen Wolf fans can influence Jeff Davis to make their favorite slash pairing, Sterek, a reality, then why shouldn’t fans of John and Sherlock expect that relationship arc to follow suit?

Plenty of other things have changed about Sherlock in 2013. He may or may not have Asperger’s and be asexual. He cheerily describes himself as a sociopath and denounces characters as gay on sight. In Series 2, Irene Adler declared that his and John’s was a relationship to rival her own love affair with the great detective. So the question of why everyone involved with the production seems to feel it’s an outlandish suggestion for Holmes to be gay in 2013 is a puzzling one.

In the middle of all the outcry over the wedding developments and the tweets from the Sherlock creative team, many fans discussed the element of slash fan-shaming that appeared to attach to the idea of Sherlock and John being in love. On Tumblr, thehappyfolk articulated this idea as subversive homophobia:

Would we have ever seen a tweet from the creative team going:

“OK, I get that some people like to fantasise about Sherlock and Molly as a couple but no one seriously thinks it will actually happen, do they?!”

I somehow don’t think we would. …And why would we never see a comment like this? I think we all know why.

Why should one (exceptionally large) section of a fandom be made to feel ashamed, stupid, and devalued for wanting a relationship in the show just because it consists of two men instead of a man and a woman?

Elsewhere, many Sherlock writers, including a handful of well-known fanfic writers, reiterated the fact that they don’t need their ship to become canon in order to continue writing and enjoying it.

Fans are now in their second year of waiting on Sherlock’s third series. The scant three episodes may be the show’s last. But with fan fervor over the show and the ship showing no sign of waning any time soon, the controversy over John and Sherlock’s romantic potential will still be growing strong, long after Sherlock itself has sent John and Sherlock off to their happy endings—whether they’re together or not.