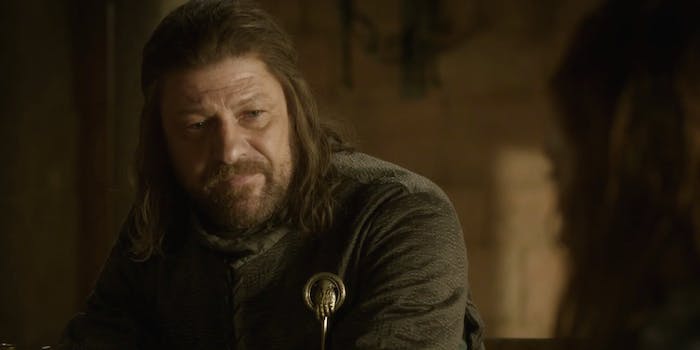 Sean Bean has even more thoughts about Jon Snow’s parents

After recent developments in the show he feels validated.

Jon Snow knows nothing, and neither does Sean Bean—but the latter presses on anyway when he’s asked about the former.

At the Turner upfronts this week Vulture asked him about his thoughts on the parentage again after revealing to him the major hints to evidence supporting R+L=J, the theory that Rhaegar Targaryen and Lyanna Stark are actually Jon’s parents (and not Ned Stark’s son), during “Sons of the Harpy.”

Vulture had already asked Bean about this last year, where he started a minor Internet freakout when he said that he’s “obviously not Jon Snow’s dad” and later had to clarify that he didn’t actually know what was going on. When it presented Bean with the new evidence, he was delighted about it.

He hasn’t played Jon’s dad (real or otherwise) since 2011, but he also had some ideas when it came to how his bastard son would react when he discovers his true parentage.

“Probably a bit psychologically confused, I would imagine!” he continued. “I think that’s probably an interesting journey for Jon Snow as a character and for [Kit Harington] as the actor. He’s been very fortunate in being one of the characters that had a very meaty, substantial, very complex story to be able to discover for himself.”

There’s enough evidence in the books to support R+L=J that many fans basically take it as fact, but who knows, we could be wrong. While many fans took Bean’s theory on Jon’s parents to be canon when he said it last year (only Alfie Allen really knows who they really are), they’re so far finding the whole thing to be hilarious.

Sean Bean's continued spoiling of #GameofThrones will never not be hilarious.

Do we think that Bean is purposely trolling us? It’s unlikely. He’s probably like us and has some ideas about some parts of the show and is rather persistent about it when asked. But for those who hang onto every word the cast and writers say hoping to get some sort of confirmation from George R.R. Martin about what happens in future books it has to be frustrating.

We can only hope that Bean will finally appear on Game of Thrones next year in Bran’s weirwood tree vision flashbacks (like he wants to) and answer this damn thing for us already.