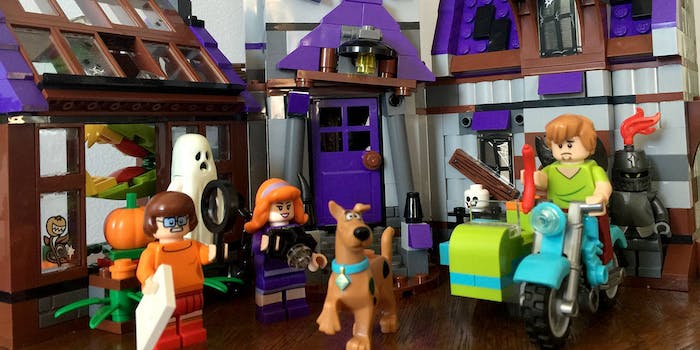 A number of questions come to mind with the new Scooby Doo Mystery Mansion Lego playset, which is apt considering the cartoon-and-movie franchise is built around solving mysteries.

The first and most important questions for fans is: Are the monster mini-figures really just devious humans in disguise?

The answer quickly becomes apparent when assembling the three included villains. Spin Dracula’s head around and we discover it’s actually Big Bob Oakley, who—according to the Scooby Doo wiki—once fooled the gang into believing he was four different people, thus earning him the nickname “the actor.”

Pulling off the ghost mini-figure’s glow-in-the-dark covering, meanwhile, reveals Bluestone the Great, an ex-magician wanted in six states, again according to Scoobypedia. And lastly, removing the Black Knight’s helmet and armour reveals Mr. Wickles, curator of the cartoon’s County Museum.

And to think they all would have got away with it if it wasn’t for those meddling kids. 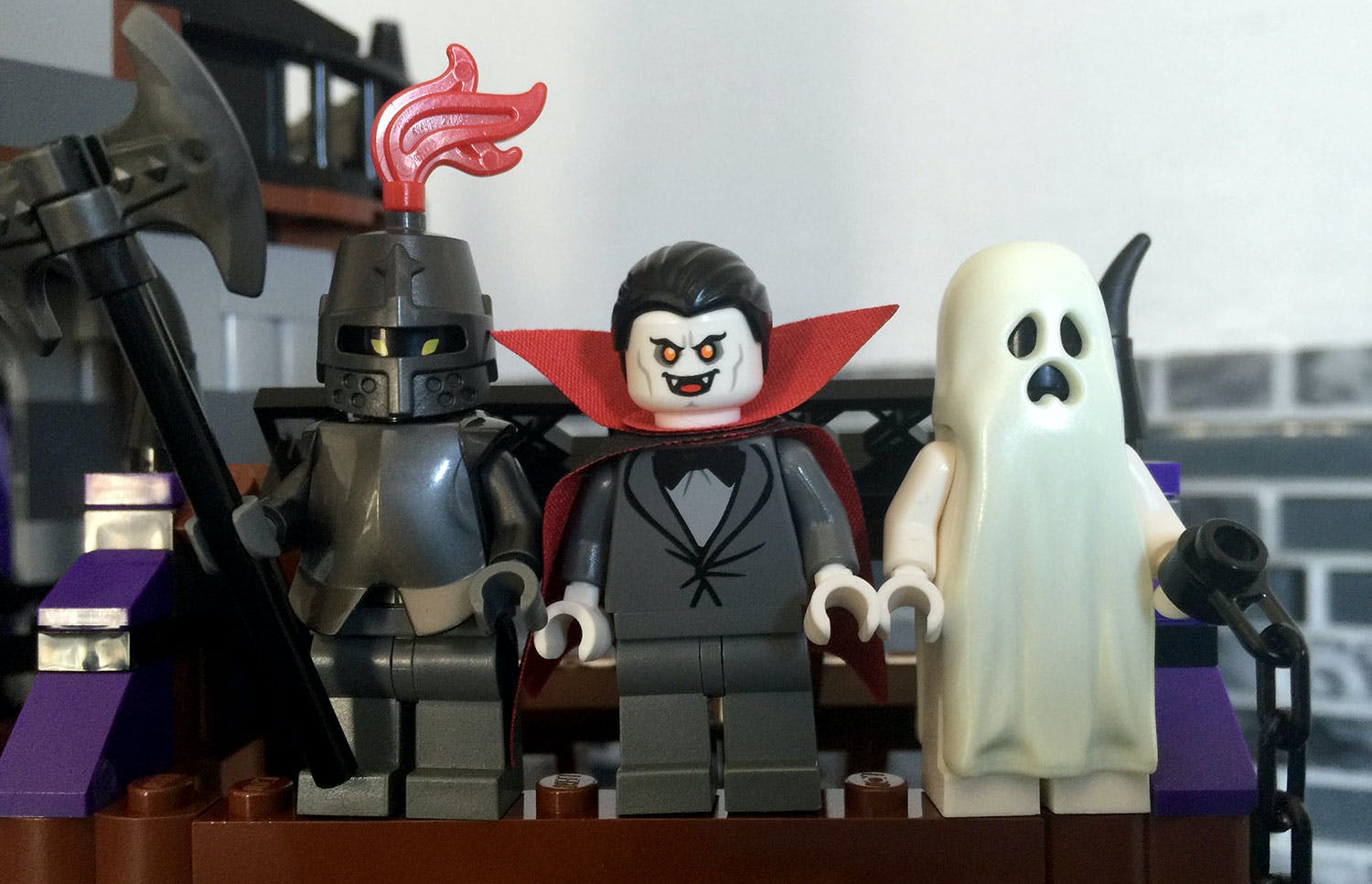 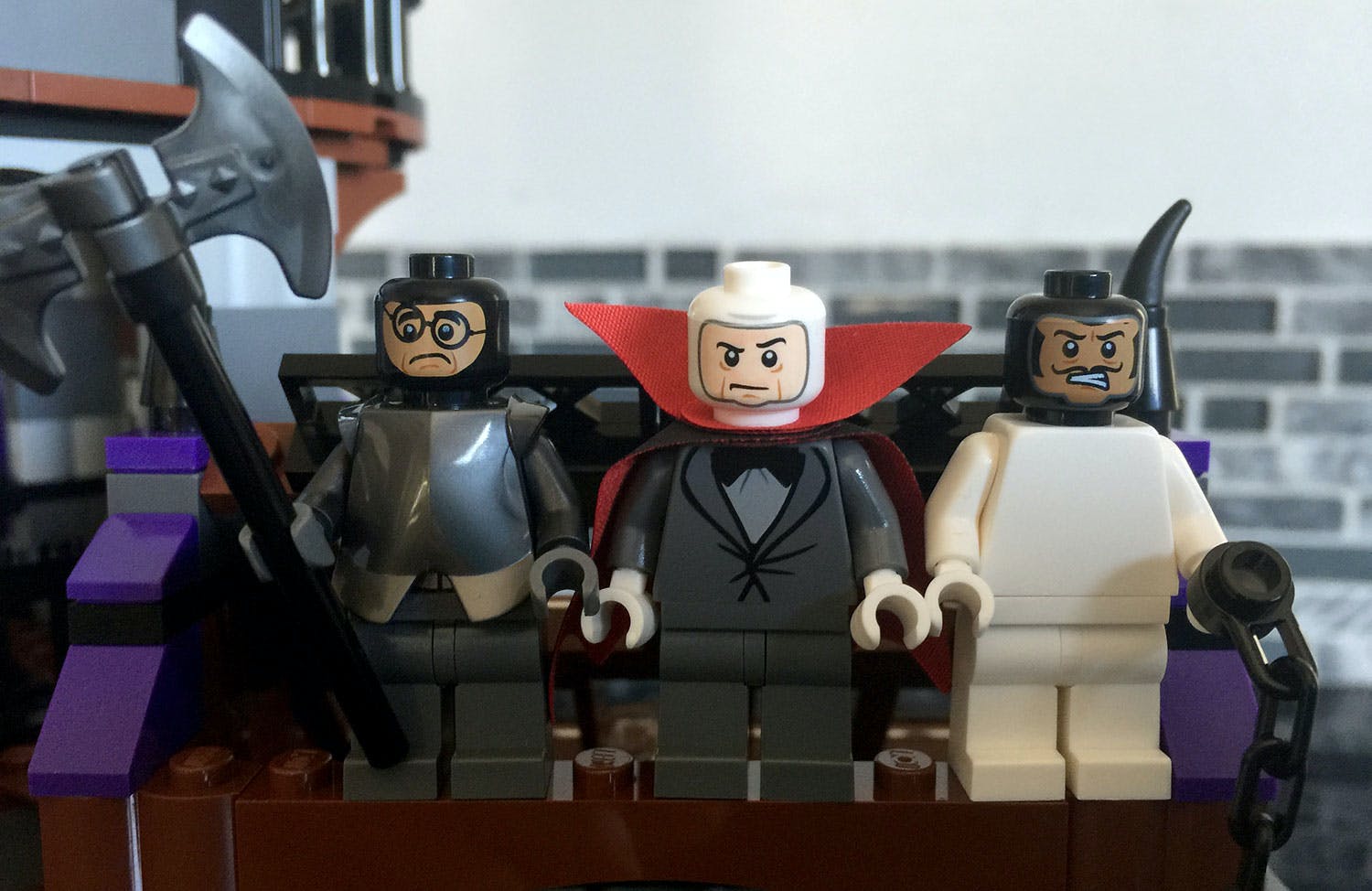 The villains are aided in their nefarious quests by several death traps built into the dilapidated Lego mansion. If any of the Scooby gang enter the front door, there’s a swinging morningstar of death awaiting them. One of the side sections, meanwhile, hides a giant man-eating plant, which will happily gobble up any trespassers that come its way.

Which leads to the next question: Are there snacks to distract Scooby and Shaggy from their mission? Indeed there are—there’s a giant burger waiting for them in the first-floor kitchen. Because a kitchen is an integral part of every haunted house. 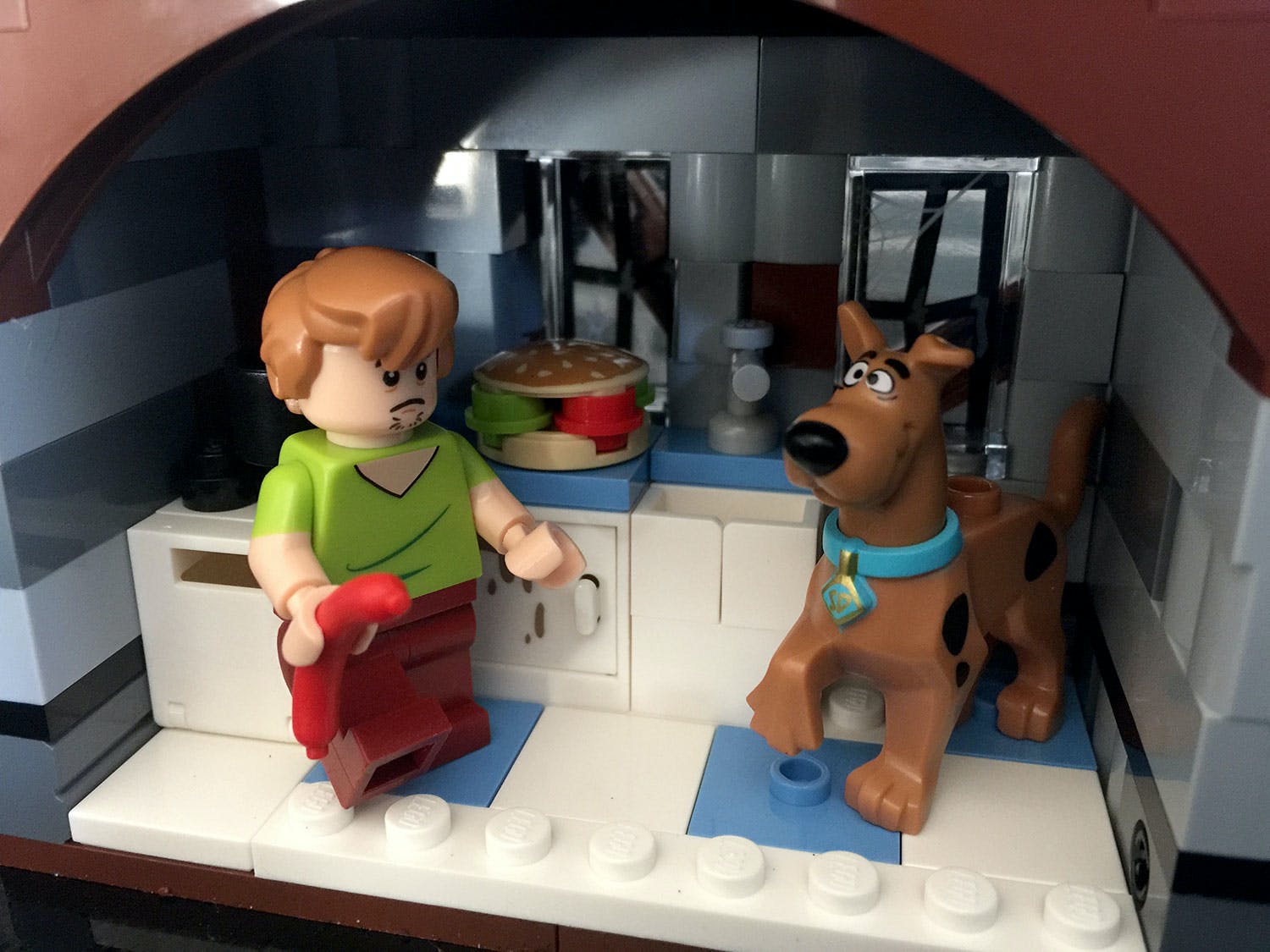 These are important elements for any Lego set based on the classic Scooby Doo cartoons, where every episode followed more or less the same script. The gang, investigating a crime or mystery of some sort, wound up in a scary, booby-trap-laden location. Scooby and Shaggy looked for food while the rest of the crew dutifully sought out clues. Disguised baddies tried to scare them all off before ultimately being unmasked and exposed as frauds.

The 860-piece Mystery Mansion gets these bits right, which illuminates how the Lego design teams work when it comes to creating sets licensed on popular entertainment properties. As with previous Simpsons sets, the teams evidently do their best to narrow down the key facets of the given franchise they’re working with, then go to lengths to hit those notes. 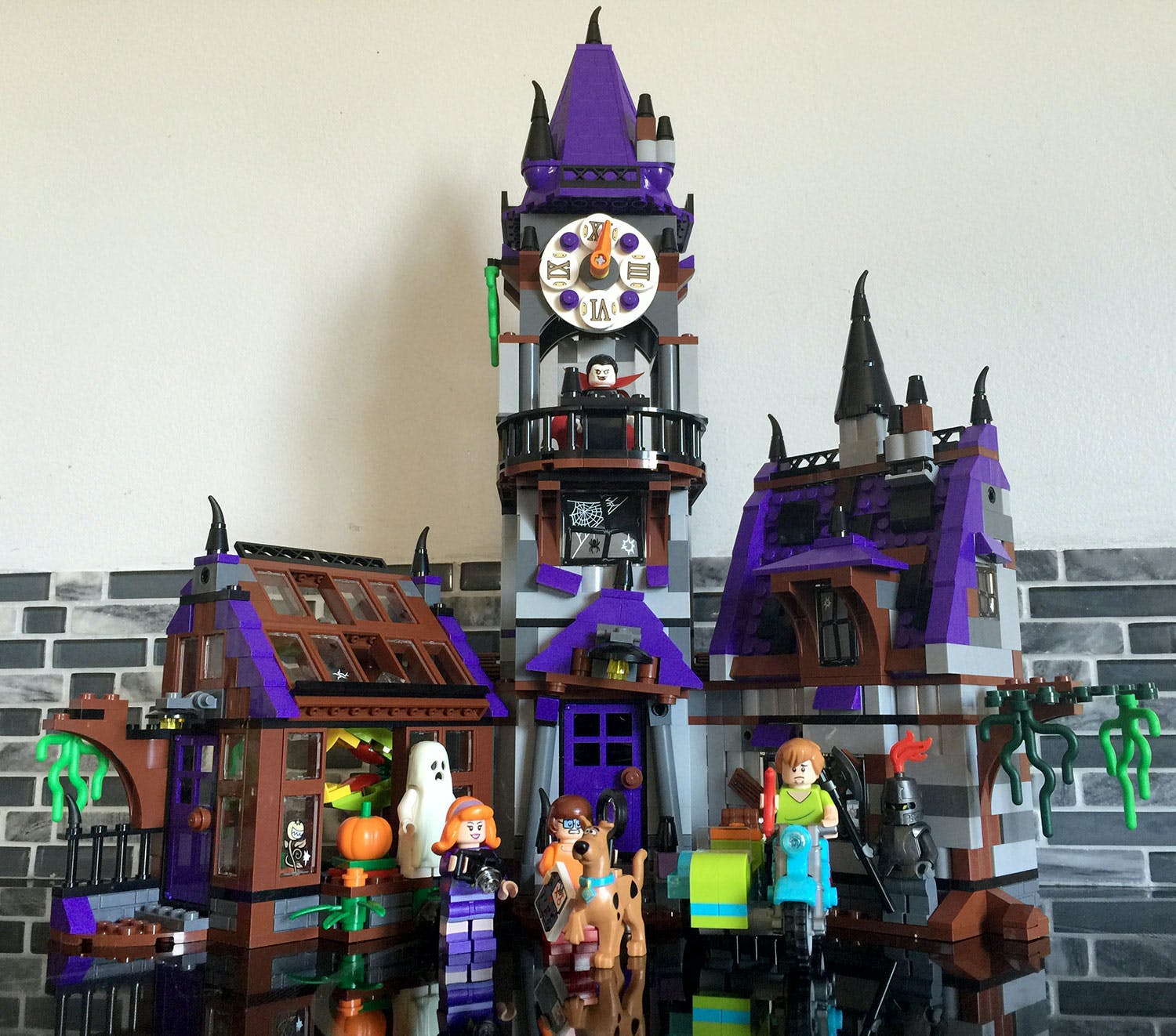 To that end, the Mystery Mansion has a spinning wall—a classic element in any haunted house and one probably seen in almost every Scooby episode—and a hidden key that serves as the gang’s MacGuffin. Velma and Daphne also come armed with the tricks of their trade, including a camera, a magnifying glass and a map. 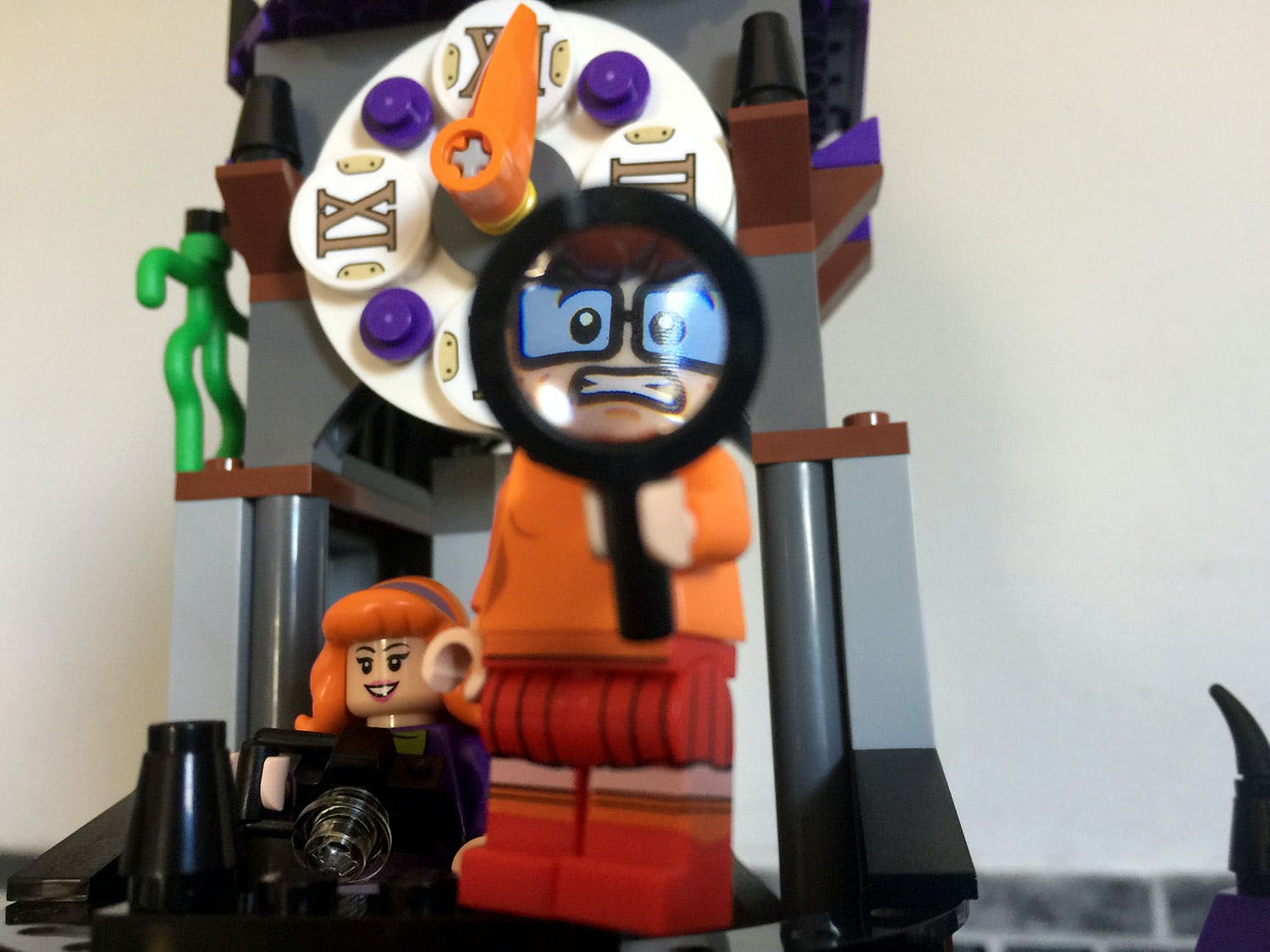 Which brings up another important question: Where the heck is Fred? The entire gang is represented in this set, except for the handsome, ascot-wearing Fred. (Scrappy is missing too, although his status in official Scooby canon is questionable. Some fans would find the annoying puppy’s inclusion to be unconscionable.)

Fred does come with the Mystery Machine, another Lego set also being released this summer, but does that imply his only role is to serve as the Scooby gang’s driver? Or does it mean something more sinister, like is Fred a prisoner of the Mystery Mansion’s bad guys?

If that’s the case then it sure looks like they got away with it, even despite those meddling kids.