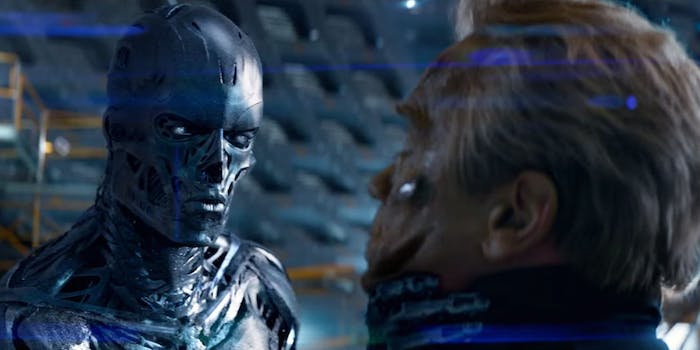 The woman who gave birth to the leader of the human resistance against Skynet probably ought to keep a low profile on social media.

Except Financial Times reporter and Twitter user Sarah O’Connor is not, in fact, robot-fighting Sarah Connor from the Terminator series.

The latter is the mother of John Connor, the man who will fight back against the Terminators after the inevitable nuclear apocalypse. And O’Conner’s name is close enough to make any tweet about killer robots an invitation for tomfoolery.

A robot has killed a worker in a VW plant in Germany http://t.co/RRdCnNmbsj

@sarahoconnor_ And so it begins…

You need to get your son to Mexico ASAP RT@sarahoconnor_: A robot has killed a worker in a VW plant in Germany http://t.co/PbcsYdZZ6C

@ElliotAndersonv @sarahoconnor_ I knew it would come to this. I just didn't think it would be so soon! Get my 40-watt pulse rifle!

O’Connor is reporting on a real tragedy. A contractor installing a manufacturing robot at a Volkswagen factory near Kassel, Germany, was killed when the robot somehow pressed him against a metal plate.

The sudden attention on the news story about the accident could be further fueled by the unfortunate keyword parallels between the fictional and real-life stories. Sarah Connor killed the T-800 model assassination machine by smashing it under a hydraulic press in a factory in The Terminator.

Now O’Connor is garnering followers who may be expecting updates on when the war against the machines will begin, despite her attempts to put a lid on The Terminator fans’ enthusiasm.

Come for the sky net jokes… Stay for informative tweets about wage costs.

Feeling really uncomfortable about this inadvertent Twitter thing I seem to have kicked off. Somebody died. Let's not forget.