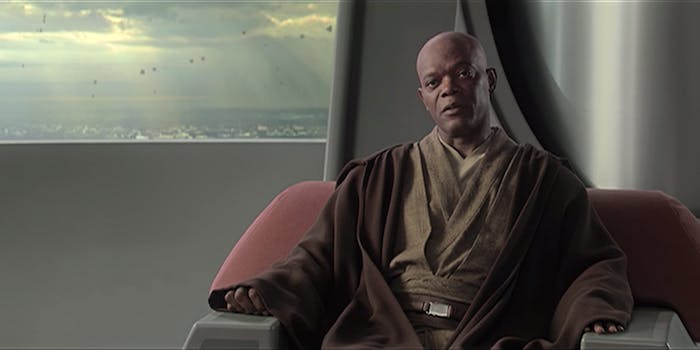 Samuel L. Jackson says his ‘Star Wars’ character is alive after all

The Jedi math checks out.

The Star Wars prequel trilogy may still be polarizing among fans, but if nothing else, it gave us Samuel L. Jackson as an epically cool, purple-lightsaber-wielding Jedi knight who fell to Emperor Palpatine heading into Revenge of the Sith’s galactic takeover. We saw him struck by lightning and fall to his death—but did he actually die?

Not according to Jackson himself, who addressed the question during a recent Twitter Q&A when a fan asked whose decision it was to kill Mace Windu in the first place.

The answer is fairly obvious: That was George Lucas’s call. Star Wars continuity made integral characters like Anakin Skywalker, Obi-Wan Kenobi, and Yoda safe, so by the time we got to Revenge of the Sith, Mace Windu was essentially the only character left we cared about who could die and have it mean something.

But not so fast. We saw Mace Windu fall, but we never came across his body. And nowadays, it’s hard to convince fans a character is dead unless there’s a body—and even then sometimes it doesn’t work. (Also see: Sherlock.)

“In my mind, I’m not dead,” Jackson said. “Jedis can fall incredibly high distances and not die.”

Jackson elaborated on Mace Windu still being alive with Entertainment Weekly, adding that Star Wars has a long history of “one-handed Jedi” and that Mace probably just kept a low profile after the Jedi like Obi-Wan fell on Tatooine. It even has the seal of approval from Lucas, though he’s not directly involved with the movies anymore.

#MaceWinduLives? You know what to do, internet.