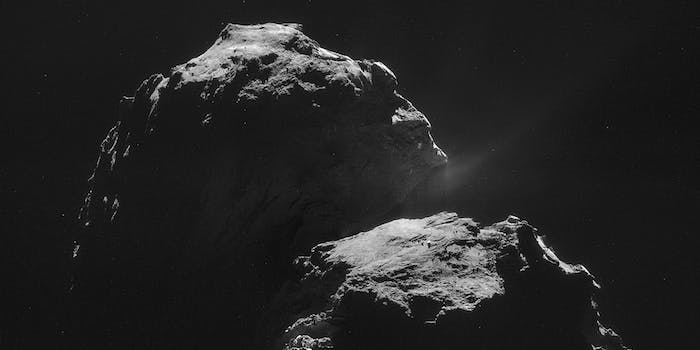 The Rosetta probe’s latest discovery has sparked a massive mystery

It's water, but not as we know it.

The Rosetta probe that landed on a comet in November has discovered water and opened the door to an entirely new mystery.

The European Space Agency announced on Wednesday that the probe, which is sitting on Comet 67P/Churyumov–Gerasimenko, had detected water vapor emanating from the flying space rock. What scientists didn’t expect, however, was for the water to be of a starkly different form than the water with which humans interact every day.

Rosetta measured the ratio of two elements, deuterium and hydrogen, in the comet’s water.

“The key to determining where [Earth’s] water originated is in its ‘flavour,'” the ESA said in its statement, “in this case the proportion of deuterium—a form of hydrogen with an additional neutron—to normal hydrogen.”

The “D/H ratio” for Comet 67P suggests that the water inside has three times more deuterium than water on our planet.

This finding is significant because it raises questions about a major scientific theory: that the water currently on Earth came from comets and asteroids hitting the planet and depositing their water on its surface.

The origins of the Earth’s water are closely studied, because the arrival of this water—which likely followed the Earth’s initial supply boiling off during the planet’s extremely hot formation—was the crucial factor that supported the formation of life.

The ESA chart below illustrates how different our water’s D/H ratio is from that of Comet 67P’s water. 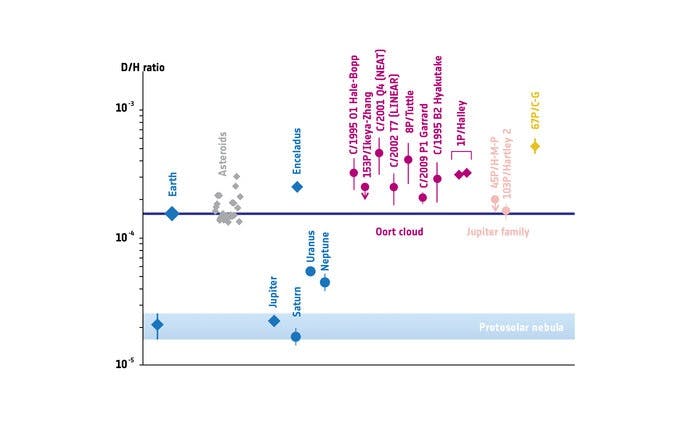 Comet 67P is considered a Jupiter-family comet because its orbit takes it just beyond Jupiter at its farthest point from the sun. The new finding suggests that scientists have much to learn about the origins of both the Jupiter-family comets and Earth’s water.

“Our finding also rules out the idea that Jupiter-family comets contain solely Earth ocean-like water, and adds weight to models that place more emphasis on asteroids as the main delivery mechanism for Earth’s oceans,” said ESA researcher Kathrin Altwegg, who supervises the use of the Rosetta Orbiter Spectrometer for Ion and Neutral Analysis (ROSINA) apparatus.

Altwegg and her team published their complete findings in the journal Science.

In October 2011, the ESA’s Herschel observatory used its infrared instruments to detect a D/H ratio on Comet 103P/Hartley 2, another Jupiter-family comet, that was almost identical to that of Earth. Hartley 2 was dubbed “the first comet containing water that is similar in isotopic composition to that in Earth’s oceans.”

For the ESA, Herschel’s finding suggested “contrary to earlier belief, comets may well have played an important role in bringing water to our planet.” Now the agency has contrary data from another Jupiter-family comet.

The mystery of Earth’s water continues.