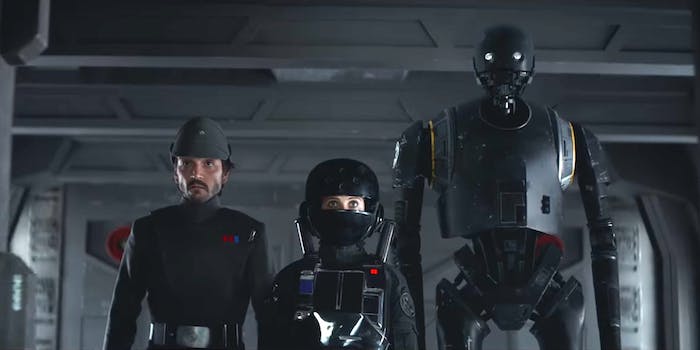 Patience, you must have.

Disney may have downplayed box office expectations for Rogue One: A Star Wars Story ahead of its theatrical release, but for the second year running, Star Wars fans single-handedly crashed movie ticket websites as soon as tickets went on sale.

Last October, the release of The Force Awakens tickets was an event. Scheduled around the release of the final Force Awakens trailer during Monday Night Football, tickets went on-sale a little earlier in the night and promptly crashed sites that weren’t equipped to handle the influx of traffic. Even with technical difficulties, sites still successfully sold an estimated $100 million in ticket pre-sales.

When it came to Rogue One, Lucasfilm decided to release tickets closer to the Dec. 16 U.S. premiere date. U.K. fans, who get the film one day sooner, started buying tickets last week, but the U.S. had to wait until Nov. 28—something they only learned a few days beforehand. The tickets were set to go on-sale at 12:01am ET—not tied to any major television event and potentially even scheduled to dampen the sheer influx of traffic, at least on the East Coast.

Rogue One might be a stand alone outside the episodic series, but it’s still a Star Wars film—one that thousands of fans want to see as soon as they possibly can. And ticket sites like Fandango began to slow down even before the official Star Wars Twitter account tweeted out the link to tickets.

Fandango wasn’t the only site to buckle under the volume of fans, but it instantly received much of fans’ wrath. Still, some tweeted about successful ticket purchases as the sites intermittently worked.

I think @Fandango enjoys the publicity of "overwhelming demand", allowing the site to crash. They know what to expect. #RogueOne

Fandango website crashing but managed to get Rogue One tickets for opening day!

Getting my #RogueOne tix thru @fandango was as frustrating as the prequels with a result as uplifting and definitive as the end of "Empire."

According to Deadline, MovieTickets.com also suffered loading issues from fans who tried to buy tickets from its site.

Some, such as Star Wars Rebels voice actor Stephen Stanton, tried boosting other ticket sites such as Atom Tickets. Others reported that AMC Theatres’ website was another working alternative.

Fandango launched a virtual waiting room for fans this year so they could queue until they were able to purchase Rogue One tickets. Alamo Drafthouse employed a similar method to handle the traffic, assuring customers that its waiting time encompassed all of its theaters, not just the one they were waiting to purchase from.

Due to an overwhelming amount of traffic, a wait room has been activated. Get #RogueOne tickets soon, you will. https://t.co/Hw6l2LkDYZ pic.twitter.com/4XiYvTMRhT

We're using a queue system for #RogueOne tickets to ease the pressure on our site. The numbers look high, but they're for *all* Alamos.

And even then, some fans had to wait awhile for their chance.

If Disney were worried about Rogue One’s showing, which is estimated to open between $100-140 million at the box office—second only to The Force Awakens—it should rest assured that fans are still as invested in Star Wars as ever.

And considering Episode VIII will pick up the story that gave Star Wars fandom new life (and made millions more fans of all ages), movie ticket sites have a year to prepare for what will probably be an even bigger wave of fans trying to buy tickets.