See some amazing behind-the-scenes footage of 'Rogue One,' plus new details from the cast.

At Star Wars Celebration this weekend, Rogue One‘s cast and crew took to the main stage to discuss new details from the upcoming movie.

The sneak peek video was intense

Gareth Edwards shared a featurette full of behind-the-scenes clips and movie footage. As with previous Star Wars movies, there was a major emphasis on practical effects. This movie looks intense—and it’s definitely a war story.

The panel also revealed the first-ever concept art from the movie, back before the main characters had been fully developed. Basically, this was the basis for Rogue One as an Ocean’s Eleven-style team movie. 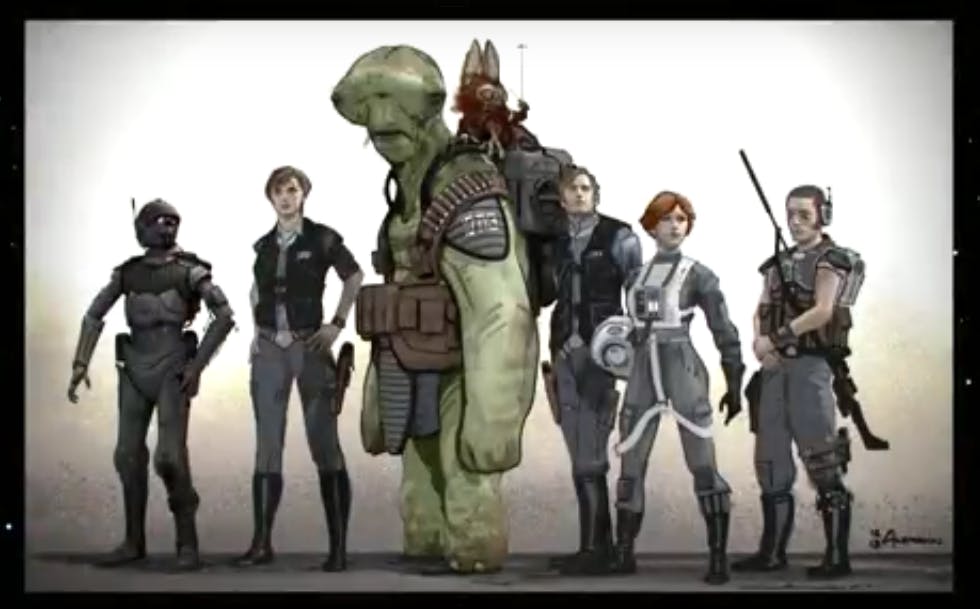 Along with the sizzle reel of new footage, the main highlight of the panel was the new character information from each of the actors. (By the way, this panel cemented our prediction that everyone is going to fall in love with Alan Tudyk’s droid character, K2SO.)

Felicity Jones says that Jyn differs from previous Star Wars heroes: She isn’t asking “who am I and where do I come from.” Unlike Rey or Luke, Jyn already knows about her past—in fact, she’s already had “a very full life”—and this forms the basis for her journey in Rogue One.

Diego Luna revealed that the team begins with just Jyn and Captain Cassian, the Rebel Alliance intelligence officer. As the team grows, there’s more friction between the characters, and Cassian is the one who has to keep them together. Apparently Cassian’s best (or only?) friend is the reprogrammed Imperial droid K2SO, played by Alan Tudyk.

Perhaps unsurprisingly, Tudyk is playing one of the more comedic characters. His introduction included a short clip of K-2SO (“7-foot tall and black,” in Tudyk’s words) being handed a bag and then disinterestedly dropping it on the floor. Basically, K2 doesn’t give a crap.

Another exciting new detail from this panel: Riz Ahmed’s pilot character works for the Empire. “People who work for big organizations, they don’t agree with everything they do,” says Ahmed, who describes his character as “questioning” his career choices.

Bodhi’s home planet, Jeddah, is where we meet the fearsome warrior Baze Malbus and his partner Chirrut Imwe, a blind warrior monk.

In the words of Chirrut Imwe actor Donnie Yen, “I can’t see, but I can feel with my heart.” Meanwhile Jiang Wen emphasized the badassery of his own character, saying Chirrut is “the thinker” while Baze is “the doer.”

Forest Whitaker’s character Saw Gerrera was an intriguing addition from the Clone Wars TV series, one of a few crossover characters in Rogue One. Whitaker describes him as a guerrilla fighter, controlling a group of rebels who are “out to the extreme.” They join other factions from the rebel alliance.

Confirming what most fans knew already, Mads Mikkelsen’s character is Galen Erso, Jyn’s father. Mikkelsen calls him “a person of interest” with “a lot of things revolving around him.” He’s also a scientist who “at one point invented something so beautiful, so fantastic that it might change the universe.

Ben Mendelsohn says Krennic is “smarter than most of his predecessors” as a Star Wars villain. “Perhaps a little sexier than some of them. Not quite as sexy as some of the others,” he added, flirting with host Gwendoline Christie.

Rogue One is “incredibly immersive”

Along with the new character details, Kathleen Kennedy went into why Rogue One will stand out from the rest of the franchise. She credits Gareth Edwards’ filmmaking style, which differs from the more old-fashioned camera work of the main six movies. He has a habit of “putting the camera on his shoulder for almost every shot.” Kennedy says she’d often visit the set to find Edwards “off in the middle of the shot… finding some incredible way to immerse us in the movie.”

In case the new sizzle reel and cast interviews weren’t enough, the panel also shared a new poster featuring the “water planet” Scariff. It includes the soon-to-be iconic image of Stormtroopers running through pristine waves, a scene that was filmed in the Maldives—much to Gareth Edwards’ personal delight.