‘Rogue One’ costumes and props revealed at Star Wars Celebration

Check out Rogue One's new costumes and props from the Star Wars Celebration convention in London.

Star Wars Celebration kicked off bright and early Friday morning, with thousands of fans queueing to see stars like Mark Hamill and Carrie Fisher, along with sneak peeks from upcoming movies.

Director Gareth Edwards will reveal new details from Rogue One on Friday afternoon, but for now we’ve got some exciting images from the film’s prop and costume display. First up: our new hero Jyn Erso (Felicity Jones) and her ragtag crew of rebel fighters. In Rogue One, their task is to infiltrate the Empire and steal the plans to the first Death Star. Jyn Erso wears several costumes throughout the film, but this one is different from the outfit we’ve seen in most of Rogue One‘s promotional images. It’s practical and subdued, including goggles, a bandolier of blaster cartridges, and a simple cotton jacket—perfect for staying anonymous on the mean streets. 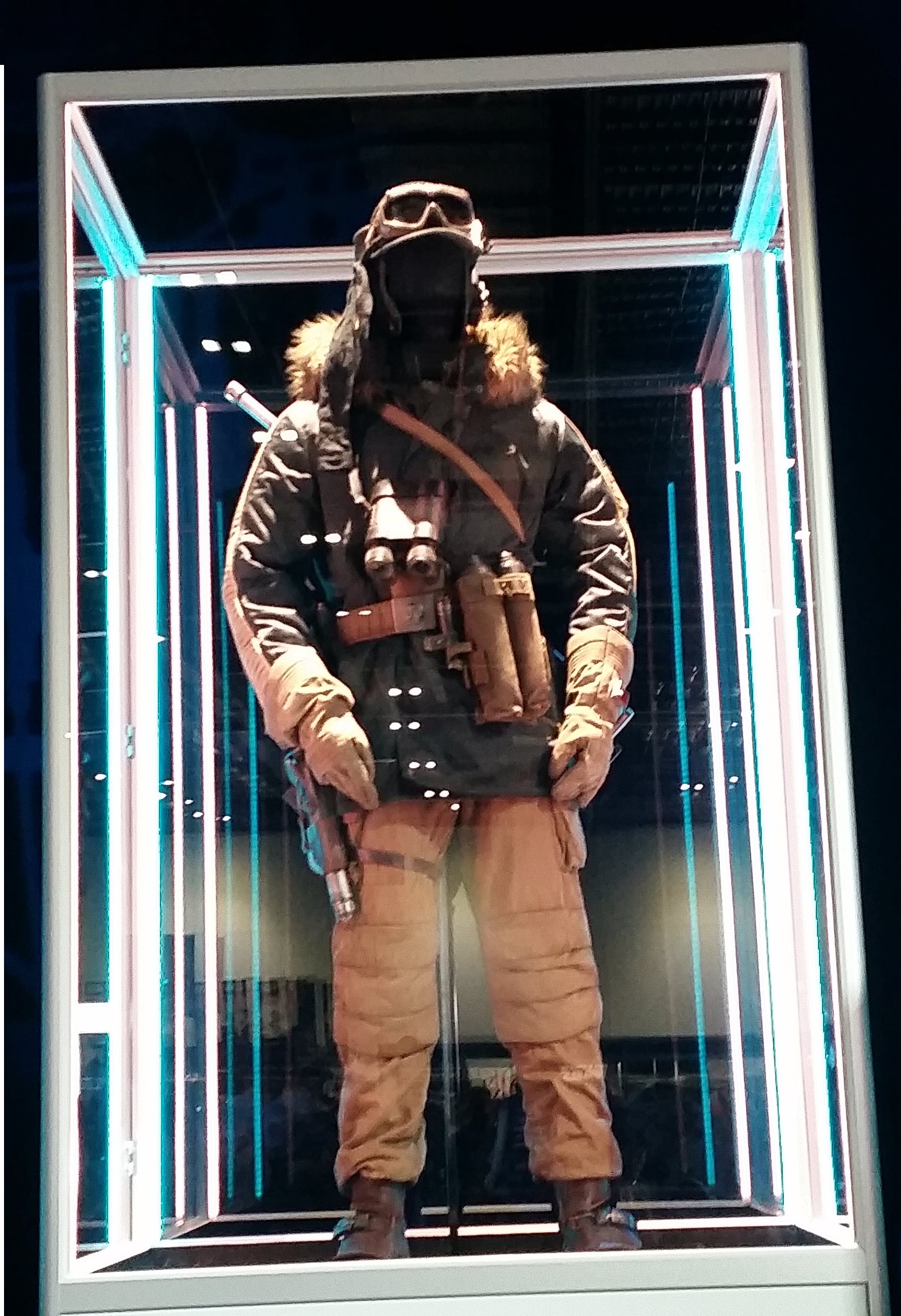 Following in the footsteps of Han Solo’s warm jackets on Hoth and Starkiller Base, Captain Cassian Andor (Diego Luna) is living proof that fur-hooded parkas are totally cool in the Star Wars universe. In contrast to Jyn’s independent spirit, Cassian is a respected intelligence officer within the ranks of the Rebel Alliance. Baze Malbus (Jiang Wen) and Chirrut Imwe (Donnie Yen) boast two of the the coolest costumes on display at the Rogue One exhibit. Described as the “galactic version of Don Quixote and Sancho Panza,” Chirrut is a blind warrior monk who follows Jedi philosophies, while his partner Baze is a more cynical soul and carries a heavy repeater cannon as his primary weapon. (That’s the thing attached to the long tube leading out of the power pack on his back.)

As you can see in the images above, Baze’s costume is far more heavy-duty than Chirrut’s, which features long red robes, a soft jacket, and two distinctive weapons. On his back, Chirrut carries a long, powered weapon (possibly something similar to Chewbacca’s bowcaster), and in front he carries a simple wooden staff. The final member of Jyn Erso’s core team is the pilot Bodhi Rook (Riz Ahmed), who wears a simple khaki flight suit. In all, this cast looks far more subdued and murky than the orange jumpsuits of the X-Wing pilots or the opulent costumes of the prequel trilogy—an appropriate tone for a story taking place during the darkest times of the rebellion against the Empire.

While Darth Vader will appear in a cameo role, the main villain of Rogue One is Orson Krennic (Ben Mendelsohn), the Galactic Empire’s director of weapons research. He has staked his reputation on the completion of the Death Star, and while other Star Wars films tend to focus on the Sith villains of the Empire, it looks like Rogue One will concentrate more on the pragmatic, businesslike side of evil. 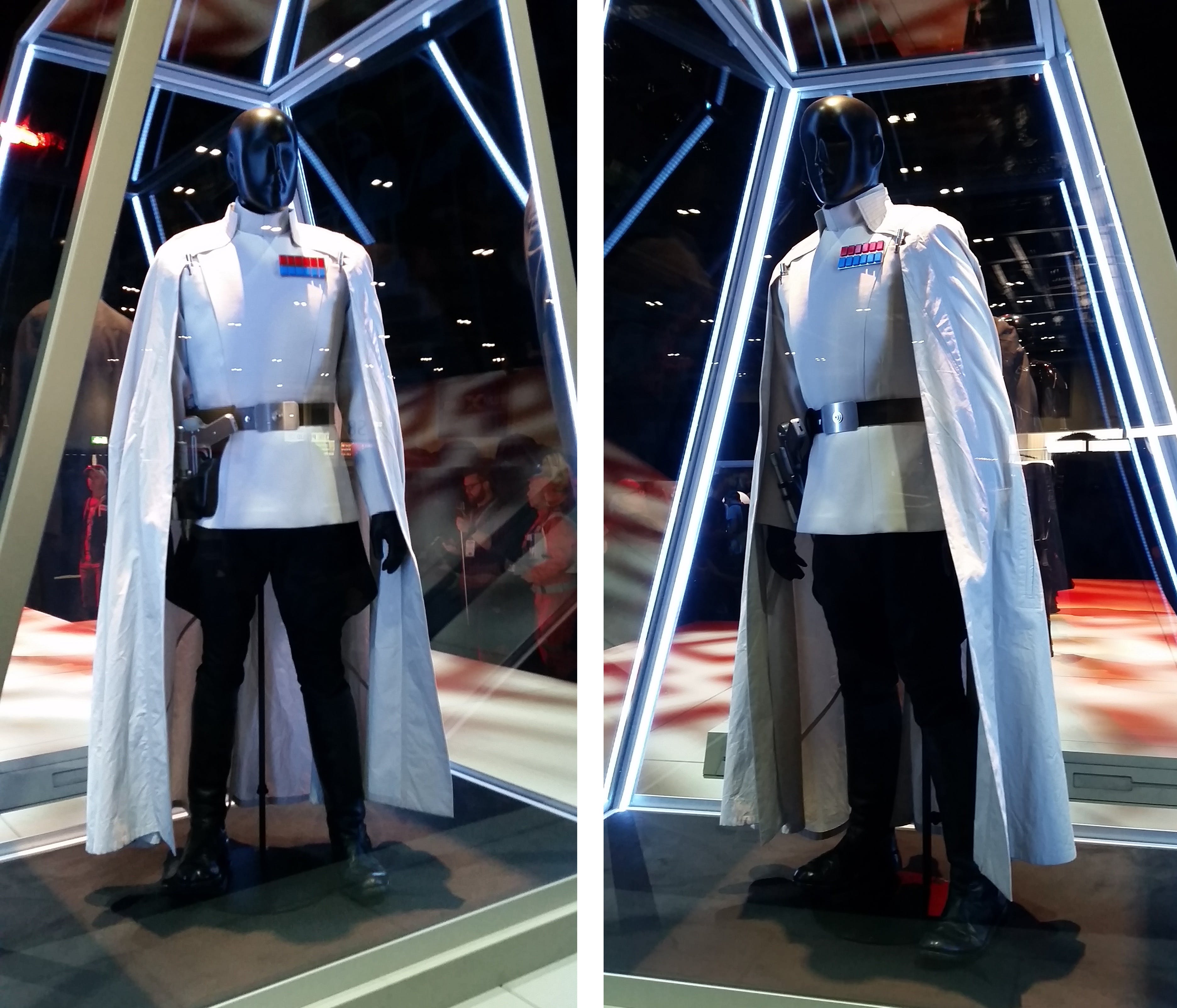 Rogue One introduces two formidable new trooper classes: the Imperial Death Trooper, Krennic’s elite force of bodyguards and enforcers, and the Shoretroopers, who patrol the Empire’s top secret military headquarters. While the Death Troopers are fittingly terrifying, featuring glossy metallic armor, the Shoretroopers are a little more relaxed. You can even see their puffy little trousers! 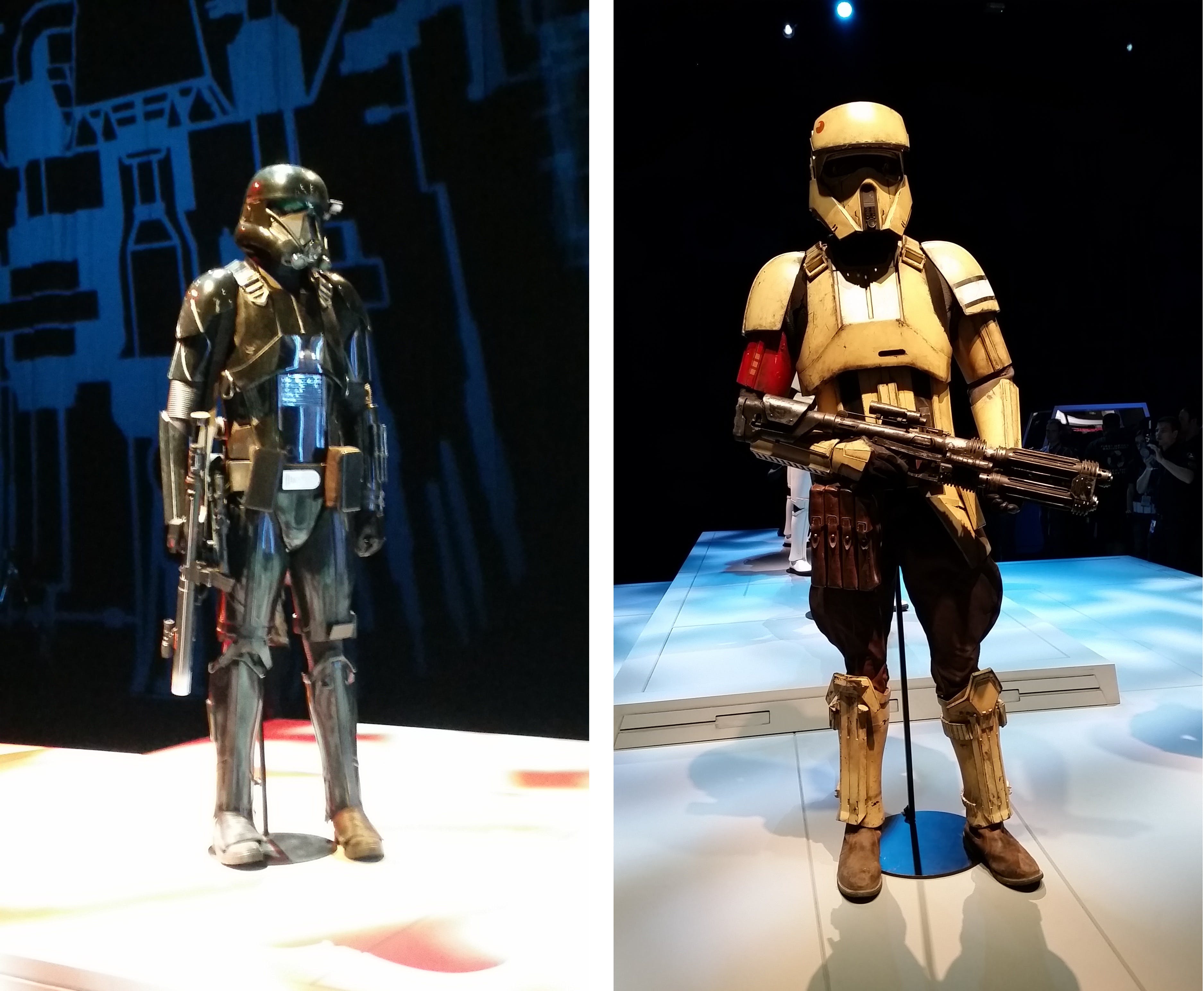 Along with this selection of new props and costumes, the Rogue One exhibit includes a closer look at a handful of new spaceships and vehicles from the Imperial forces. 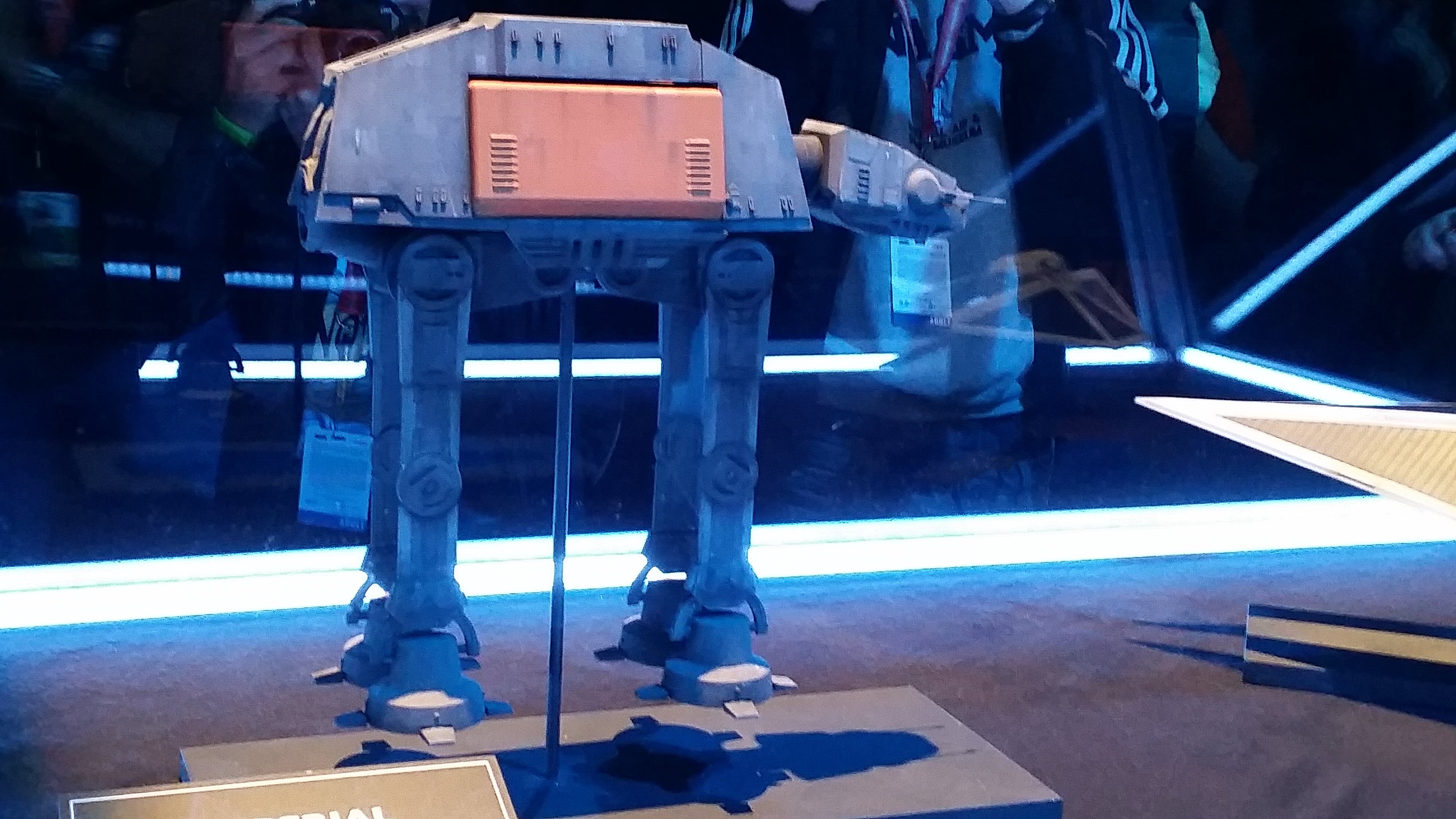 The TIE Striker is described as a “more streamlined” version of the TIE fighter, designed for flying over ground installations. It’s also fully capable of spaceflight, making it versatile enough to accompany the rest of the Empire’s forces into battle. 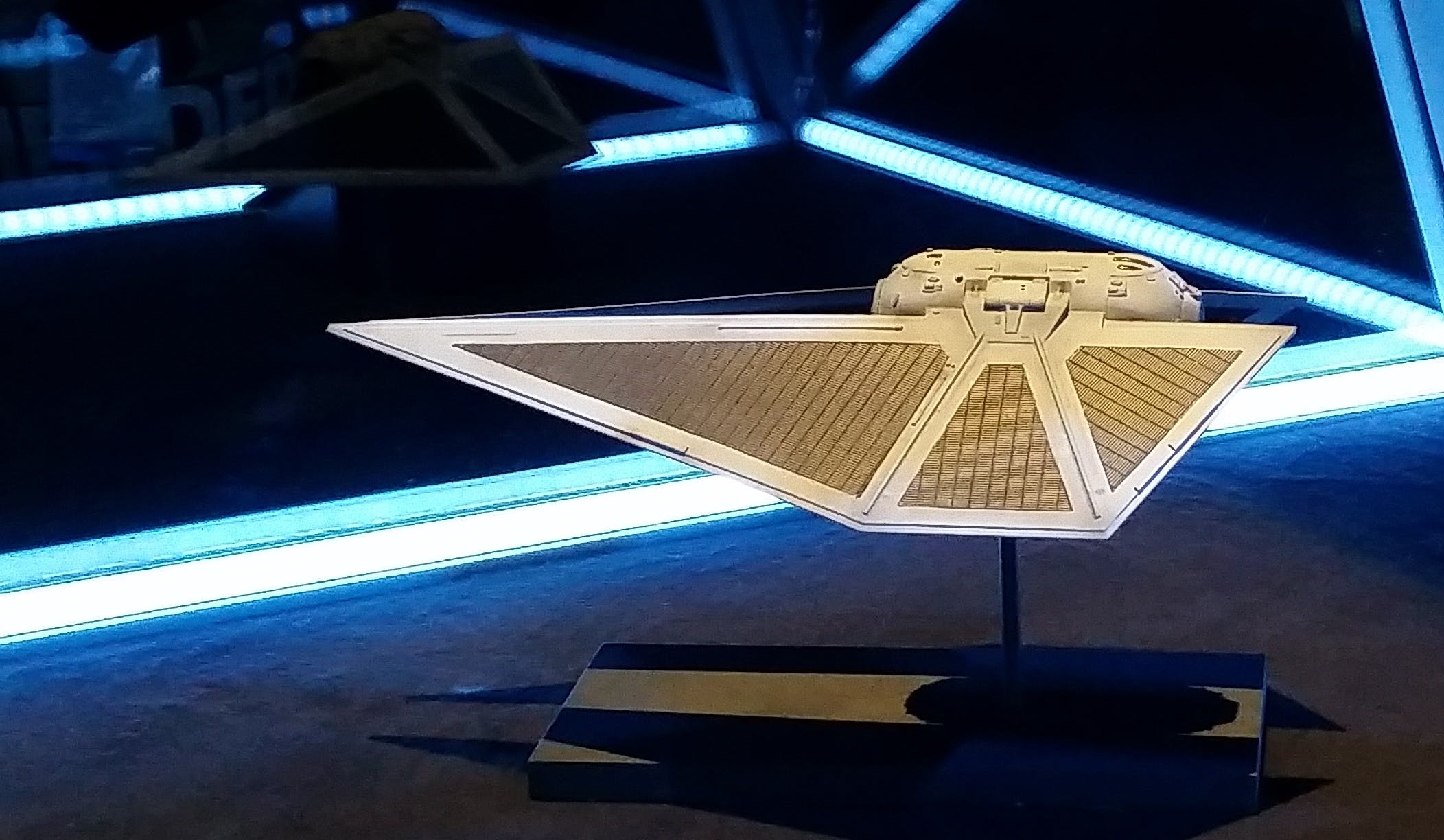 Finally, we have Krennic’s Delta Class T-3e shuttle. Unless we’re very much mistaken, this is another new design for Rogue One, riffing off a couple of classic shuttles from the Empire’s back catalog. The three-winged shape follows the Lamda Class shuttle used by Emperor Palpatine, along with the bat-wing design of Kylo Ren’s imposing spacecraft in The Force Awakens. 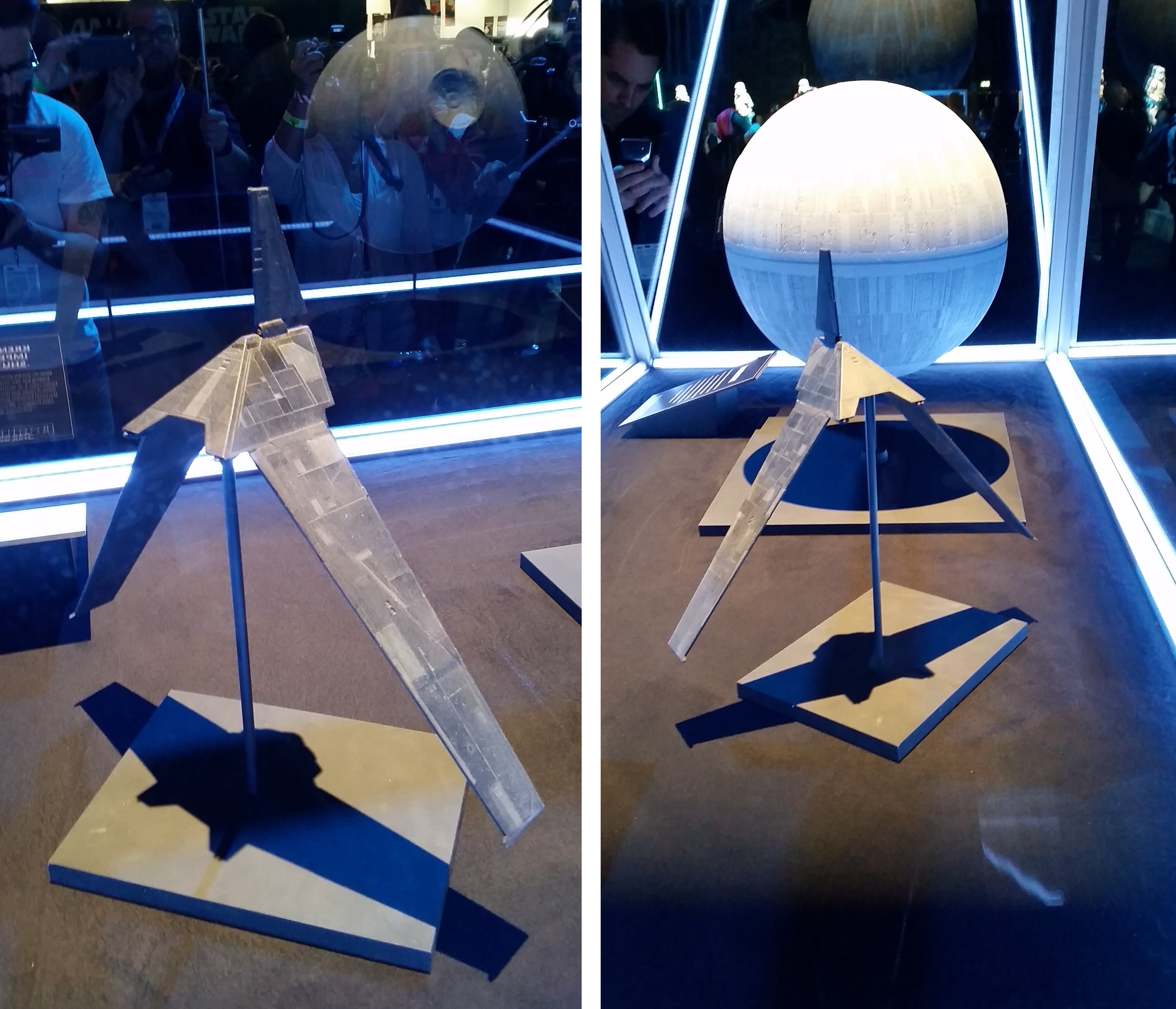 Disney will release a new trailer for Rogue One on Friday afternoon, to coincide with Gareth Edwards’ panel at Star Wars Celebration.