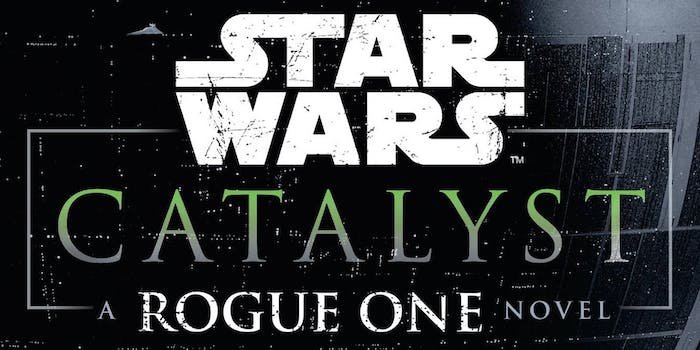 6 things we learned about ‘Rogue One’ from the novel ‘Star Wars: Catalyst’

The latest Star Wars novel offers some insight into how Rogue One might play out.

When Disney purchased Lucasfilm and took control of the Star Wars universe, the entertainment giant made it clear that all upcoming stories would be tied together. The Lucasfilm story group oversees every movie, book, comic, and cartoon to ensure certain characters, planets, and events line up correctly in the expansive new Star Wars timeline.

The latest novel, penned by Star Wars expert James Luceno, serves as a direct prequel to the upcoming Rogue One. Catalyst starts about 19 years before the action of December’s hotly anticipated movie and reveals quite a few details about the Death Star and the new characters. Here are the most relevant facts we gleamed from Star Wars: Catalyst and how they will play into Rogue One. Many other canon materials have explored these mystical stones, including Star Wars: Rebels and the recently released Ahsoka novel. These crystals power lightsabers (and give them their individual coloring), but as Galen Erso (Mads Mikkelsen) discovers in the pages of this novel, they have another use. A passionate scientist, Erso was fascinated by the power of these objects and given the resources to study them freely by an old friend, Orson Krennic (Ben Mendelsohn). ??

However, as Krennic rose through Imperial ranks, the research took a more sinister turn. Galen came to learn that the power of kyber crystals can be channeled into a focused laser, and Krennic used this to begin constructing the Death Star’s world-obliterating weapon. When he learned of this ultimate goal for his research, Galen fled the Imperial facility with his family. While a sense of mystery still surrounds these crystals, Catalyst offers our best look yet at how they came to be weaponized. 2) What happened on Geonosis?

While some Star Wars fans might like to forget all about Attack of the Clones, one sequence on the desert planet of Genosis is crucial to understanding the origins of the Death Star. Poggle the Lesser, the insectoid Separatist ally, presented Count Dooku with plans for the ultimate weapon, ensuring they made their way to Palpatine. Catalyst sheds light on how this character escaped being a prisoner of the Republic and the role he played in the Death Star’s construction.

Orson Krennic returned him to Geonosis, to oversee some of the initial labor required to build such a massive space station. Poggle eventually attempted to betray Krennic and sabotage the Death Star. Though he escaped, the Empire responded by sterilizing the entire planet and moving the construction project to another site, led by Grand Moff Tarkin. A rivalry between Imperial leaders is one of the core relationships in Catalyst, and it will certainly carry over to Rogue One. While the Death Star is a passion project for Orson Krennic, the recently promoted Tarkin sees it as leverage to rise through the military ranks. When Tarkin steps in to assume control of the project, Krennic is desperate to ensure he can continue his research and get credit for the superlaser weapon.

The two plot against each other, establishing an antagonistic relationship.

Krennic’s relationship with Galen Erso is a point of contention, and Tarkin is inclined to distrust their research. However, by the end of the novel, both men have prominent roles overseeing the Death Star’s completion. It will be interesting to see how their distaste for each other is portrayed on-screen in Rogue One.

We have known for a while that Forrest Whitaker is bringing a character from The Clone Wars animated series into the world of live-action, but what brought this young freedom fighter from Onderon to the desperate conditions seen in Rogue One? We meet this character late in the book, helping Rebels escape from the Empire. Saw actually pilots the ship that smuggles the Erso family off Coruscant at the end of the novel.

He establishes a mentor relationship with young Jyn, so when they reconnect in Rogue One, the two will recognize each other. As a family friend, it’s likely Saw will be eager to help Jyn and her squad of rebels to steal the Death Star plans and defy the Empire. What happens between the end of the book and Rogue One is unknown, but Saw Gerrera is wearing his weariness from years of war in all footage released so far.

Matriarchal mysteries are a big topic in the Star Wars fandom as of late, thanks to rampant speculation about Rey’s lineage. Lyra Erso, played by Irish actress Valene Kane, has only one small appearance in an international trailer so far. This scene is set on Lah’Mu, the green planet that the Ersos are hiding out on. She has a large target on her back from encouraging Galen to defect from Imperial ranks, and it is not likely she will survive past this opening sequence.

Krennic comes knocking for his old friend Galen, and as they hide Lyra entrusts Jyn with a necklace, seemingly containing a small Kyber crystal. Catalyst explores Lyra’s spiritual connection to the living crystals and the force. In fact, Lyra and Galen met and fell in love while researching the force-sensitive objects. Jyn almost certainly gets her rebellious attitude from her mother, as Lyra spends much of the book plotting against Krennic. 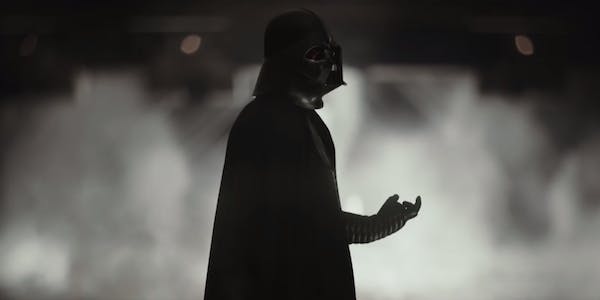 6) What Role Will Darth Vader play?

Rogue One’s worst-kept secret is the presence of a certain Sith lord. Though absent from much of the initial marketing, it has been confirmed many times over now that Lord Vader will indeed show up in the film. Voiced by James Earl Jones, who recently lent his talents to Star Wars: Rebels, Darth Vader can be seen conversing with Director Krennic in many recent trailers. ?While some fans expect Vader to ruthlessly put an end to the Rebels’ mission, we may not see him wield a lightsaber at all.

The iconic character doesn’t make an appearance in Catalyst, but he is mentioned several times. We learn that he is still something of a myth in the galaxy at this time, one of Emperor Palpatine’s many secret weapons. Only high-ranking officials like Tarkin are aware of Vader’s true nature, and he rarely leaves the Emperor’s side. We know that Vader will get involved in the action thanks to his appearance early in A New Hope, but his role in Rogue One may be more dialogue-heavy than action filled.