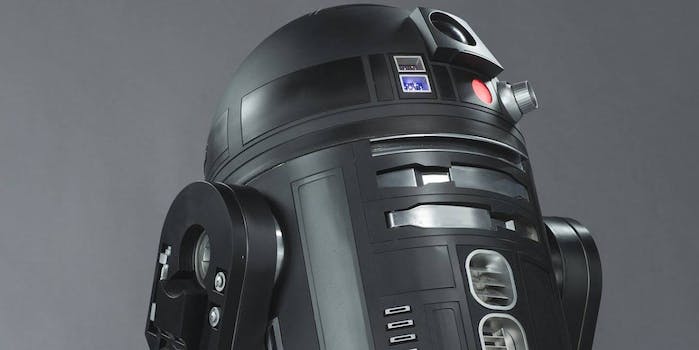 This new character could say some interesting things about the role of droids in the 'Star Wars' universe.

If someone asked you to picture the Galactic Empire’s answer to R2-D2, what would you describe? We’re guessing a black astromech droid with chrome accents and a red eye-light, which is exactly what Rogue One is giving us.

The Star Wars franchise introduced its latest droid character on YouTube, partway through the latest episode of The Star Wars Show. C2-B5 is an Imperial astromech droid, and while we don’t know its exact role in Rogue One, it may provide some interesting insight into how droids are treated in the Star Wars universe.

Droids occupy a weird place in the Star Wars narrative, somewhere between slaves, pets, tools, and independent people, depending on the situation. The movies never fully explore the extent to which droids are autonomous or “owned” by the human characters, but it looks like this conundrum will be relevant to C2-B5’s role.

As revealed on The Star Wars Show, Imperial astromech droid C2-B5 from Rogue One. pic.twitter.com/XCywIn2fAK

As the video explains, the Empire uses astromech droids for repair work across the fleet—but unlike the Rebels, they regularly wipe the the droids’ memories in order to keep them subservient. This puts a droid like C2-B5 in direct opposition to R2-D2, whose knowledge of Rebel secrets could easily be a huge security risk, but whose independent personality has saved the day on numerous occasions.