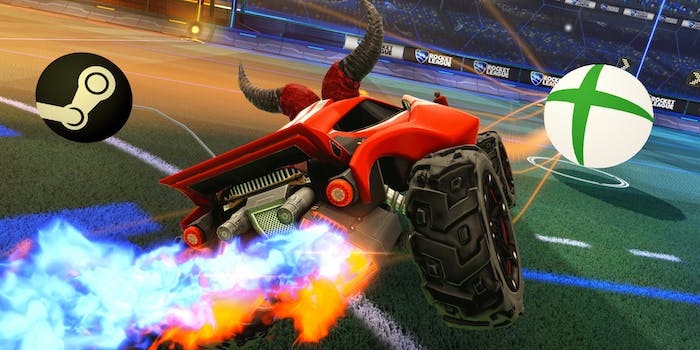 Two out of three audiences of the massively popular multiplayer game are no longer divided.

Anyone who plays Rocket League on the Xbox One or on PC via Steam now has a few million more people to match their skills against.

Rocket League, the hilarious multiplayer game about driving rocket-powered cars on huge soccer fields while trying to ram giant soccer balls into the goal now features cross-platform play between the Xbox One and Steam. Jeremy Dunham, vice president of marketing and communications at Psyonix, today announced the new feature on the Rocket League site.

“As we promised in March,” Dunham wrote, “cross-network play for the Xbox One and Steam PC versions of Rocket League will officially roll-out later this afternoon by 3pm PT/ 6pm ET/ 10pm UTC, making it the first-ever Xbox One game to support cross-network play with a Steam PC game.”

Rocket League is critically acclaimed, taking away in February three major awards at the 2016 DICE awards in Las Vegas, and in March winning best design at the 2016 Game Developers Conference in San Francisco.

Rocket League has also proved to be a hit on Twitch, and been embraced by the esports community. The Rocket League Championship Series is currently taking place and has a $75,000 prize pool for the winning team.

Cross-platform play is still a rarity even though multiplayer gaming has become a staple of the modern game industry. Games like Call of Duty and Battlefield sell largely based on their multiplayer modes and attract tens of millions of players.

New games like Battleborn and Overwatch are multiplayer shooters that are also designed with the esports scene in mind, and might particularly benefit from an open online ecosystem and the largest number of possible competitors.

Modern game consoles use more off-the-shelf components than in previous generations, and are more similar to gaming PCs than consoles have ever been. With hardware lines thus blurred it’s natural that divisions between console and PC online communities might follow suit.

Bridging the console divide between the PlayStation 4 and Xbox One has also been discussed for Rocket League. Dunham in an interview with GameSpot published on March 22 said that Psyonix had figured out the technology necessary to do so, and that the question of whether or not it happened came down to the politics between Microsoft and Sony.