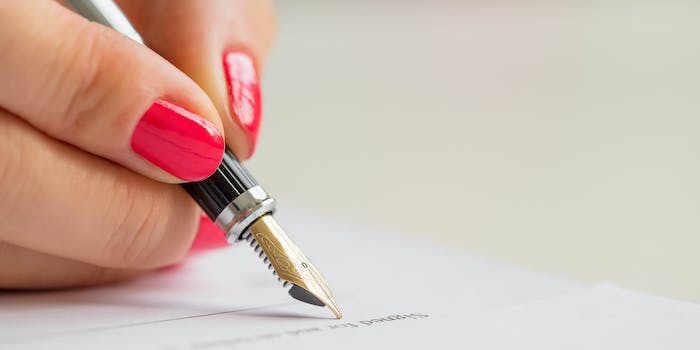 Just ask Trump: Arbitration is a way to silence women

His lawyer's latest move against Stormy Daniels is a classic, oppressive one.

Where there are shady legal machinations, you’ll often find our president. On Monday, Donald Trump’s lawyers asked a federal judge to move Stormy Daniels’ lawsuit against him into arbitration. This would take the proceedings out of the public eye and keep them behind closed doors. It’s a practice often exploited by the powerful to keep the less powerful silent. It’s a practice often used on women.

Forced arbitration prevents an employee from taking a dispute to court as a condition of their employment (or, in this case, a settlement). Instead, the dispute is settled in a private process by a third party and the employee (or the other party) waives their right to sue or appeal.

Daniels’ lawsuit, filed in March, seeks to officially nullify a non-disclosure agreement that she signed in exchange for a $130,000 settlement she received right before the president was elected; Daniels’ lawyer contends the NDA is not binding because Trump did not sign it. Trump’s lawyers are attempting to enforce arbitration, as there was allegedly an arbitration clause in the settlement agreement.

A bid for arbitration pertaining to a legal proceeding regarding a non-disclosure agreement might seem a bit convoluted—but practices like these have become all too common in America. And forced arbitration is a cause that has been taken up by feminists, labor advocates, and leftists for quite some time.

In 2014, President Obama signed an executive order barring companies who enforce arbitration clauses on sexual harassment claims from receiving government contracts. President Trump, unsurprisingly, repealed the order in late March. Around the same time, the attorneys general of every state came together to demand that mandatory arbitration be illegal in sexual harassment cases.

This week, Quartz published a piece this week titled, “You’ve Probably Signed Away Your Sexual Harassment Civil Rights at Work,” which details Rep. Pramila Jayapal’s (D-Calif.) attempts to fight back against the rise of arbitration clauses in the workplace with her bill, H.R. 4734. As Jayapal points out, not only does arbitration take place behind closed doors, but it overwhelmingly favors employers.

Last year, the Economic Policy Institute found that 56.2 percent (over 60 million people) of American private-sector non-union employees are subject to mandatory arbitration. 30 percent of these employees are forced to sign class-action waivers which prevent them from taking collective legal action. Practically, this means that they cannot sue for sexual harassment, and if everyone at work is being sexually harassed, well, you can’t sue either.

Arbitration clauses have become commonplace among employers, and even among companies whose customers agree to use their service or product. The most insidious thing about these clauses is how casually companies force them into contracts. Jayapal described the process to Quartz:

“You know, you come in and you’re given a ton of forms on the first day, and you sign them all because it’s part of your employment contract…hidden in those forms for many companies in the private sector are these mandatory arbitration clauses, which essentially means that if you have a complaint as an employee, instead of being able to sue the company and bring forward that complaint in a public court, you essentially give away your right to do that, and instead go to forced arbitration.”

This doesn’t just apply to big money legal cases in Hollywood or D.C. Last year, a class action suit was filed by workers at Sterling Jewelers. Sterling runs Kay Jewelers and Jared: The Galleria of Jewelry among other stores familiar to mall shoppers. 69,000 women across the company joined a class action suit alleging pay discrimination and harassment.

As a result of arbitration rules that had been in place at Sterling since 1998, these employees were subject to mandatory arbitration, internally referred to as “resolve” rules. The resolve rules delayed justice for the women of Sterling for well over a decade. Some of their claims date back to the early 2000s.

One particularly harrowing example of a worker deeply affected by arbitration is a 2004 case involving a female Sterling employee who accused a co-worker of rape during a 2003 company-sponsored resort trip. The “resolve” rules in this instance meant that Sterling was free to “set out to investigate, intimidate, and discredit” her before firing her later that year, all while never stepping foot in a court of law. Despite all this, Sterling was able to convince an Ohio judge that the employee’s case should be resolved in arbitration.

Forced arbitration is so heinous of a practice, especially in matters of sexual harassment, even business-friendly publications like the Wall Street Journal have spoken out against it. Earlier this year, WSJ told the story of Charmaine Anderson who was fired from a Waffle House after she complained that her boss was sexting her pictures of his penis and threatening her with violence if she would report him. She started to pursue legal action, but her attorney advised that trying to fight the company’s arbitration agreement wasn’t worth it. Anderson told the Journal, “I knew I couldn’t fight it, so I just let it go. It was a humiliating situation. I felt like I was nobody and didn’t have a chance.”

Goldman Sachs, Taco Bell, Uber, and numerous other major corporations have used arbitration to shield their companies from the consequences of discrimination and sexual harassment in recent years. The New York Times found that in 2014 judges upheld arbitration clauses banning class action 132 out of 164 times. Though WSJ couldn’t get precise numbers thanks to the confidentiality practices of arbitration forums, it is a reasonable estimate that only hundreds of sexual harassment claims go to arbitration out of thousands of complaints. One study found that the average award is only $12,000.

The unfortunate truth is that for the time being, it is going to be difficult for Jayapal, Sen. Kirsten Gillibrand (who introduced legislation similar to Jayapal’s in the Senate), or any of the states’ attorneys general to be heard on this issue even though the movement behind it is gaining steam. It’s hard to imagine a man who is using arbitration to fend off sexual-related matters and who has been accused by numerous women of harassment and assault will pass a law forbidding the practice. For the next few years, the only option might diligence or legislation on a state level.

If there is a silver lining, though, it’s that the president’s behavior could shine a light on a terrible practice—one that his successor could be in a position to bring to a long-overdue end.