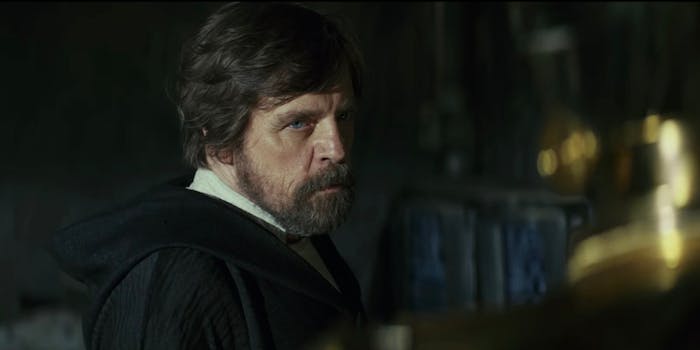 Here’s how to access music-only cut of ‘Star Wars: The Last Jedi’

Star Wars: The Last Jedi shook up how we viewed the long-running franchise, but those who have a digital copy of the movie are now able to watch and listen to it in a completely different light.

Speaking in a Facebook Live chat with Amazon Prime, Rian Johnson revealed that along with the promised commentary, deleted scenes, and bonus features, fans can also access a new version of The Last Jedi that just features John Williams’ score. The film is now available digitally (with the Blu-ray release set for March 27), but no matter which version of The Last Jedi you own, you’ll be able to access it.

We’re live with @Star Wars: The Last Jedi Director Rian Johnson at SXSW chatting about the film! Own it tomorrow: http://amzn.to/2Gjr08p

As Johnson explained around the 11:28 mark, he wanted to give fans a version that really showcases the work Williams did. There are subtleties the score delivers that might end up going unnoticed because it’s downplayed due to important dialogue or action sequences. For Johnson, it’s like experiencing a silent film.

“One thing that I’m really excited about with it, that I really want to talk up—and this was something that I really pushed to figure out a way to do,” Johnson said. “It’s a really special thing. We’re going to have a music-only version of the movie. So basically, we did a mix where there are no dialogue, no sound effects, no backgrounds, nothing but the score playing at regular perfect level. So you can watch it like a silent film just with John’s score. If you do this, it’s incredible because it really, you see the nuance that he rides the emotion of the scene with, and it’s being able to just focus on that music.”

Johnson also announced the music-only version of The Last Jedi on Twitter, which included instructions on how to obtain your copy. You’ll need to have Movies Anywhere app to access it, whether you purchased your movie digitally or use it to redeem a digital copy with a Blu-ray. And given how much Williams’ score resonates with us within the Star Wars movies, we can only imagine just how much more powerful it’ll be when it’s the only thing we can hear in space.

The Last Jedi’s out today in the states for digital download, blu in two weeks. Of all the special features, my favorite one is kinda hidden, so wanted to call it out. If you buy the movie anywhere online (or the blu) you have access to a music only version of TLJ.

The one hoop you have to jump through to get it: get the Movies Anywhere app and link whatever account you bought the movie with to it. It’s free, it works pretty painlessly. Kinda a pain I know, but I think it’s worth it to get this version.