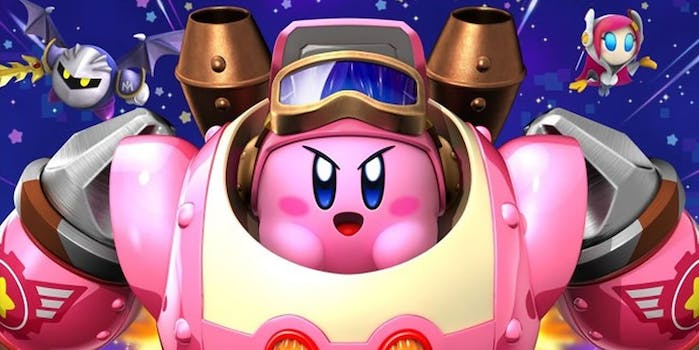 Kirby's back, and he brought a giant robot.

Ever since Kirby’s debut in 1992, he’s been a perennial favorite among Nintendo‘s impossibly adorable roster of characters. Eternally optimistic about his career as a heroic creampuff, he never seems to tire of eating everything in his path. Best of all, he has a skill any hero would envy: copying his enemies’ powers.

Kirby Planet Robobot is the 25th game in the Kirby series, which makes it all the more notable. Any franchise with that many entries should be threadbare by now, but what’s impressive about this game is that it’s anything but. It has charm for days, gleams with polish, and communicates a sense of childlike wonder and delight.

Nintendo is known for those qualities, of course, but Kirby Planet Robobot is an excellent reminder of why Nintendo has such a dedicated fan following. It’s also a really good reason to enjoy the juxtaposition of little pink Kirby inside a big stompy mech (which, to be fair, is also kind of cute).

Kirby Planet Robobot is a platformer where Kirby’s mission is pretty much the same as always: Save the world from evil forces. This time a terribly large ship has swooped in to take over his home world. Kirby snoozes through the initial attack but awakens to discover Castle Dedede and the Halberd in rubble and King Dedede and Meta Knight defeated. And so our favorite puff is off and running to do what he does best. 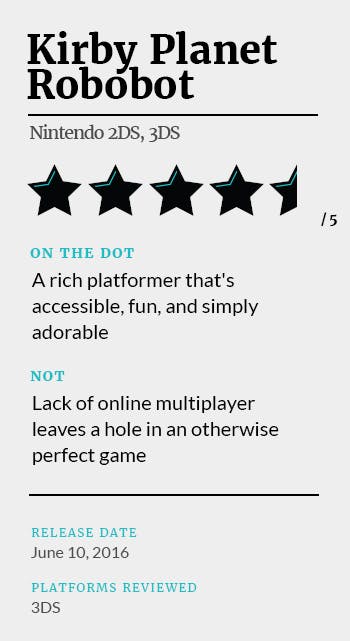 The story mode of Kirby Planet Robobot is what fans have come to love and expect from the franchise. There’s lots of clever platforming, utilizing depth in the levels by jumping back and forth. And of course, Kirby’s inhaling his enemies so he can gain their powers.

There are tons of abilities to gain as well, and every one of them is a joy to watch. One moment, our pink hero is a shuriken-throwing ninja; the next, a fire-breather, a ball of fierce electricity, or a frosty snowman. Zelda fans will also be tickled pink (groan) to see there’s even a sword-fighting mode where Kirby can wear a familiar green cap. The game is also compatible with any of the new Kirby amiibo, which will give Kirby exclusive outfits and abilities.

What sets the game apart from its predecessors is that you can steal something new from your enemies: mech suits, which they surely think renders them unstoppable. Once you knock them out and get in one, though, you’re one badass puff! When Kirby is in a mech, he can still absorb enemy abilities, so you can get up to 10 different versions of a super mech on your hands depending what enemy you come across. 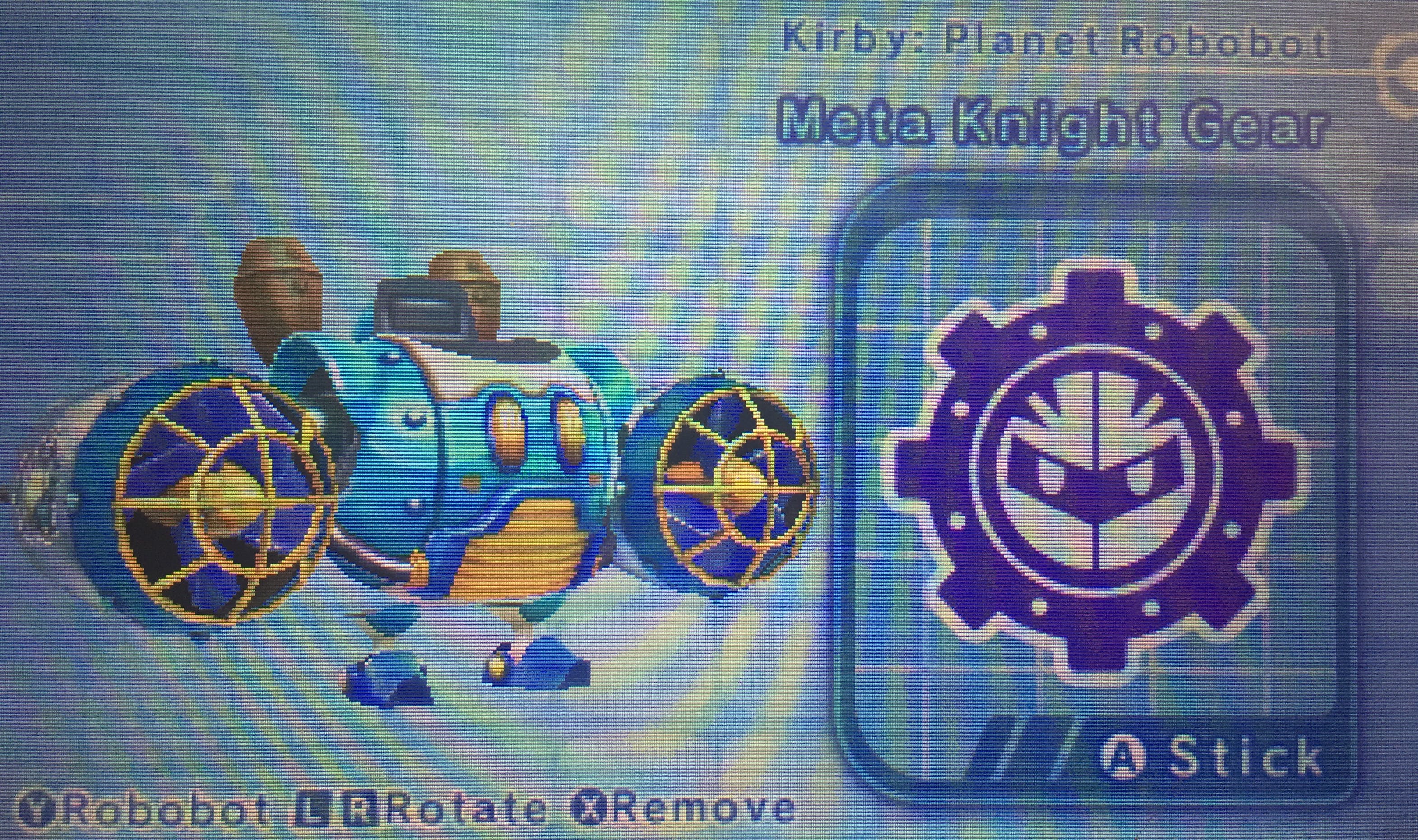 Playing as mecha Kirby is pure delight. He’s much more powerful and can basically barrel across areas, smashing everything in his wake. Being in the mech is not just for the fun of crashing about; it’s typically used for puzzle solving. Some puzzles can only be solved while you are in it, but the game makes it simple for you to figure out which ones. There’s no wondering what to do next.

The overworld of Kirby Planet Robobot is whimsical and charming, loaded with detail just like the rest of the game. You’ll travel through a total of six areas, each representing a leg of a huge robotic creature. Within each you’ll explore a variety of levels and collect up to three “Code Cubes.” The cubes open the path to the boss of each area. You can gather more than required if you’d like to unlock some of the game’s special goodies.

I was transported to a space of childlike joy while I played it.

Code Cubes are not hard to find within the levels. As you progress into the game they are a bit better hidden, but never to the point of frustration. In fact, it’s of note that Kirby Planet Robobot never hit a point where the difficulty was annoying. Players who seek out more challenge may not feel they get enough out of it, but if you’re in the mood to enjoy a fun ride through beautiful worlds it should suit you perfectly. Avoiding being hit by giant soft-serve ice cream cones can hardly be called stressful.

Every platformer level trope is present in Kirby Planet Robobot, and somehow each one is a pleasure to play, feeling like an homage to classic titles. You swim, you race, you go on rails, and you slip and slide around on ice. Your mech transforms and you’re suddenly in a shooter. It speeds up and you’re in a racing game. It’s just a touch of each, and they’re so well-paced that you never have a chance to get tired of any of them. These touches leave you feeling a bit nostalgic.

After each level is complete, you’ll play a cute little minigame where Kirby gets shot out of a cannon into the fluffy clouds. As he flies through the air, he just might grab a few extra treats or stars along the way. Shooting him out of the cannon is weirdly satisfying, perhaps because he makes little burbly noises as he goes. There are other goodies to be collected in the game’s levels. Stickers are rewarded once you have completed a level. Then you can use them to decorate your mech. Sadly, you can only decorate specific spots on its arms rather than smacking stickers all over it the way I wanted to. You have dozens of stickers but can only use two at a time. 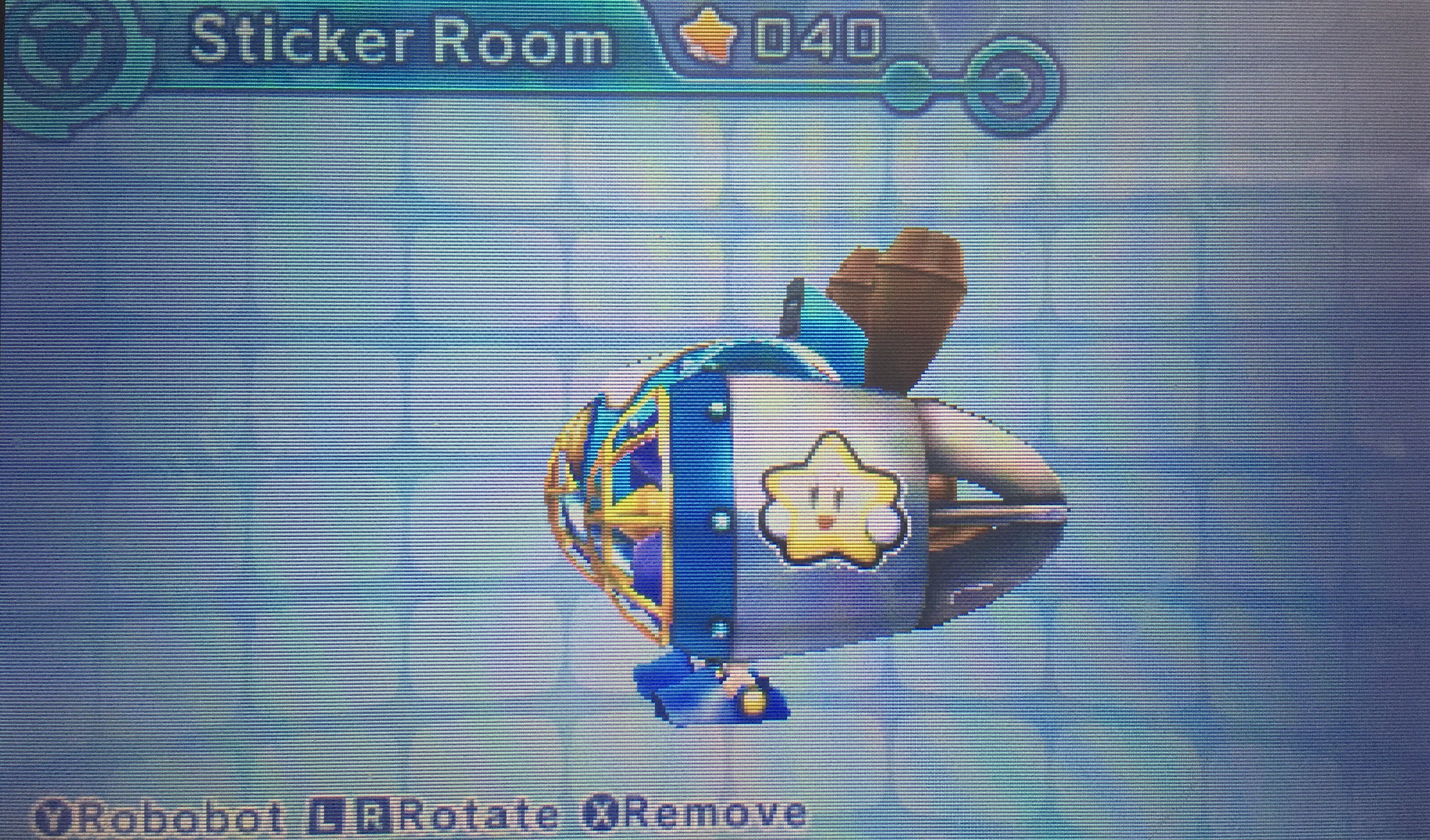 If you need a break from story mode or just prefer to play something a little simpler, you have two minigame options in the main menu: Kirby 3D Rumble and Team Kirby Clash. The first is a score grind where you beat up enemies against the timer. It’s a really fast play (think of a super-accelerated version of running through worlds) and ends in a boss fight after four stages. Once again, not super difficult, but definitely fun to play if you have a few spare minutes.

Team Kirby Clash is an RPG-flavored minigame where the multiplayer option comes into play. You can still play it solo by choosing Team Quest from the main screen. It allows you to choose one of four basic classes for yourself and the class you’d like for the AI. You will go directly into a boss fight from there, pounding on your opponent in hopes of seeing two special tablets drop. When they do, each player grabs one and executes a super attack, which will get your team that much closer to the win. After each fight, you’ll also level up and get stat boosts, and you’ll receive a score bonus depending on how quickly you take out the boss. If you manage to KO him, you’ll pick up a badge (hint: Don’t pick up your tablet until the boss is almost dead!).

It’s great that Nintendo made a solo option for Team Kirby Clash, but you can instantly tell this game was made for others to join in. You can add up to three other players locally in Wireless Quest mode. If your friends don’t own the game, they can grab it via Download Play for free. The one oversight is that the option to match and play with people on a larger scale is missing. It’s a small dent in a largely fantastic game, but it would have amped the replayability of Team Kirby Clash much more.

Kirby Planet Robobot is not a deep game in terms of story, but it doesn’t need to be. It serves up exactly what the series is known for with a new twist, and it does so with awe-inspiring ease. One of my biggest takeaways was how completely I was transported to a space of childlike joy while I played it. It’s hard for a game to really strike that note of pure happiness, an emotion many of us remember from sitting in front of our Nintendo Entertainment Systems in the ’80s. Making a game strictly aimed at children or adults is a challenge on its own, but hitting the sweet spot for both is what makes a classic. Kirby Planet Robobot just might be one of those.

Disclosure: Our copy of Kirby Planet Robobot was provided courtesy of Nintendo.