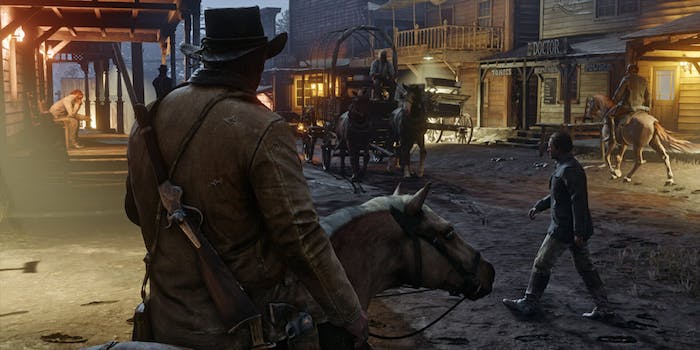 My paycheck for a horse.

Here are two inconvenient facts for people who play video games: The cost of making games is rising, and customers don’t want to pay more than $60 for games. Game publishers have found a solution that seems to be working, even if it makes some gamers mad. They add microtransactions, and based on the latest investor call by Grand Theft Auto and Red Dead Redemption publisher Take-Two Interactive, it sounds like microtransactions will play an important role in all of its games going forward—including 2018’s Red Dead Redemption 2.

Microtransactions come in many forms, depending on the game in question. Card games like Hearthstone might charge a few bucks for a new pack of cards. Many games, like Overwatch, offer “loot boxes,” which contain things like new costumes or character gestures. In Take-Two’s Grand Theft Auto Online—the online mode of Grand Theft Auto V—players can buy outfits, weapons, and vehicles using in-game currency or real-life money.

As a result of these microtransactions, game companies can keep charging $60 for games that would otherwise cost more. With the additional revenue stream, they can also continue supporting the games by adding new content.

In a call to investors on Tuesday, Take-Two Interactive CEO Strauss Zelnick emphasized the importance of microtransactions—or, as he called it, “recurrent consumer spending.” Zelnick said microtranactions made up a full 42 percent of Take-Two’s revenue over the last quarter.

That’s a major chunk of the company’s revenue, so it’s no surprise he plans to keep the pipeline open for upcoming games. “We’ve said that we aim to have recurrent consumer spending opportunities for every title that we put out at this company,” he said. “It may not always be an online model, it probably won’t always be a virtual currency model, but there will be some ability to engage in an ongoing basis with our titles after release across the board. That’s a sea change in our business.”

The next big game coming from the publisher is the highly anticipated Red Dead Redemption 2, scheduled for release in the second quarter of 2018. If there was any question that this sequel would offer microtransactions, we can put them to rest now.