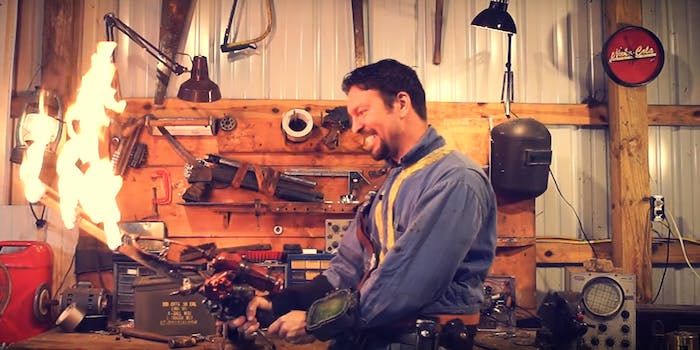 Don't build one unless it’s actually for post-apocalyptic adventures.

How would you like to own a deadly sword with gouts of flame licking up the sides? That looks like something out of a Mad Max movie?

The Shishkebab is a weapon in the Fallout universe that is more or less a sword that’s on fire. You cut people with the blade for direct damage and torch them simultaneously. Shishkebab literally slices through raiders like a hot knife through butter.

And even though Fallout 4 is loaded with DIY goodness—you can cobble together tons of different weapons, and armor pieces—the Shishkebab is a piece of loot that drops pre-assembled and ready to go. It doesn’t even need fuel.

In the real world, however, if you want a Shishkebab you have to build it yourself. So that’s precisely what Caleb Craft from Make did—working from game developer Bethesda’s concept art. The build process is detailed on the Make website. If you want to skip to seeing the final product in action, Craft has uploaded to YouTube a video of the real-life Shishkebab in action.