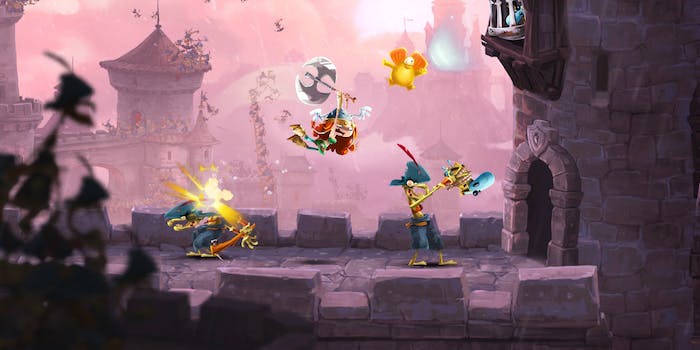 This is the third Rayman game from Ubisoft that's available for mobile devices.

It’s Rayman’s birthday, but you’re the person who gets a present.

Ubisoft has released Rayman Adventures, the latest game in the popular Rayman series, as a free title for iOS and Android devices, to celebrate the series’ 20th birthday.

Rayman Adventures is a hybrid between an endless-runner and a platformer. Once you get moving, you continue to accelerate in that direction, but you can swipe to change directions. The graphics are smooth and adorable. The music is lighthearted and catchy. It’s absolutely worth your time to download and try.

We gave Rayman Adventures a whirl today to see for ourselves how it holds up on mobile. Some levels focus on smashing through enemies in a race to the finish; others are about capturing the fairy-like Lums that appear throughout the Rayman series; and still others are more traditional platforming challenges where you look for collectibles and other hidden secrets.

There are 110 different kinds of creatures you can discover and take with you (one at a time) into the levels. The creatures spawn from eggs that have cooldown timers before they hatch. Each creature grants a specific benefit, like protecting you from harm, acting like a vaccuum cleaner to suck up Lums, or pointing out areas of interest within the level. You may only bring the creatures with you if you have food to feed them.

“Free-to-play” almost always means “copious in-game purchases,” course. In Rayman Adventures, you can buy Gems that unlock costumes for Rayman and Barbara the Viking, your current character choices. Ubisoft will release two more characters in the future. You can also earn Gems for free by completing challenges.

Microtransactions can also be used to buy Golden Tickets that unlock prizes, food to feed creatures so you can bring them with you, and Elixirs, which can, among other things, shorten egg-hatching cooldown timers. Those items, however, are not yet available for purchase.