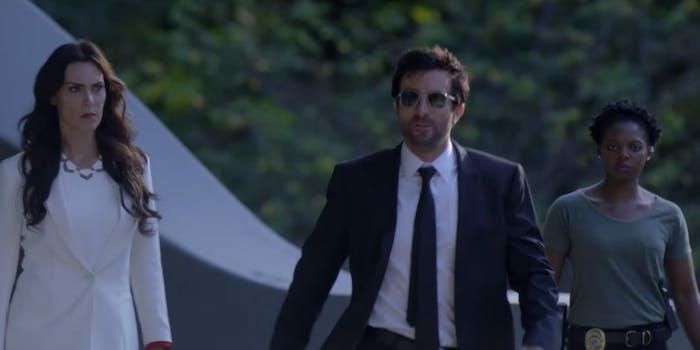 PlayStation follows Amazon and Netflix into the original series arena

Sony is poised to beat Microsoft out of the gate in joining Amazon and Netflix in the ongoing development and distribution of original video content.

The first trailer for the Powers television series premiered at New York Comic Con. Christian Walker is being played by Sharlto Copley, best known for his role of Wikus Van De Merwe in District 9. Deena Pilgrim is being played by Susan Heyward, who played Hannah in the television series The Following. Eddie Izzard and Michelle Forbes will also appear in the first season.

Powers won the Eisner Award for Best New Series in 2001. The comic is about a homicide detective named Christian Walker, who used to be a superhero but lost his powers. Walker and his partner, Deena Pilgrim, investigate homicides related to “Powers”—the collective name in their reality for superheroes—by tapping into Walker’s deep knowledge of their community.

Sony announced their plans for a Powers television adaptation produced by Sony Pictures Entertainment during its PlayStation press conference at the Electronic Entertainment Expo. Microsoft founded Xbox Entertainment Studios in 2012, for the purpose of developing original television content to be distributed on Xbox Live. Microsoft’s flagship initiative was a live-action Halo series executive produced by Steven Spielberg.

Microsoft closed Xbox Entertainment Studios in 2014, and transferred development of the Halo television series over to its first party studio 343 Industries.