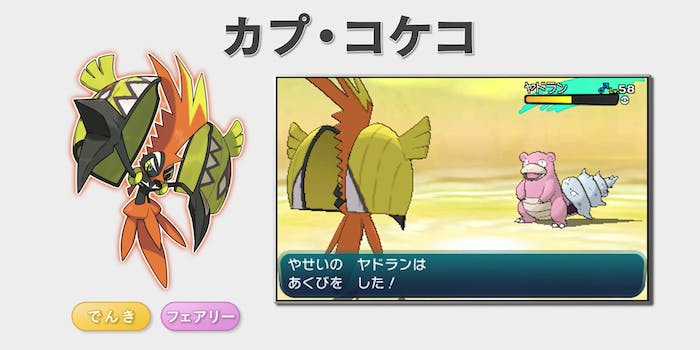 The new Pokémon include a chill stoner dragon dog, an adorable round rodent, and a bug that looks like a cube.

After an awkward leak where seven unannounced Pokémon found their way onto 4chan, Nintendo has released a trailer confirming each of the new Pokémon and their names.

Pokémon Sun and Moon are due out in November, and the new starter pocket monsters have already made waves on the internet. Now, get ready for seven new Pokémon ranging from a small green cube with horns (Charjabug) and an aggressively colorful flying fish with enormous lips (Bruxish).

The earlier leak also included YouTube videos for each of the seven new Pokémon, which are still online. Along with Bruxish and Charjabug, we have the adorably round rodent Togeredamu, the tough and spiky Tapu Koko, the chill stoner dragon Drampu, the self-explanatory Cutiefly, and a bug named Vikavolt.

Considering what the internet made of the new starter Pokémon, we can’t wait to see how people will react to this lot.