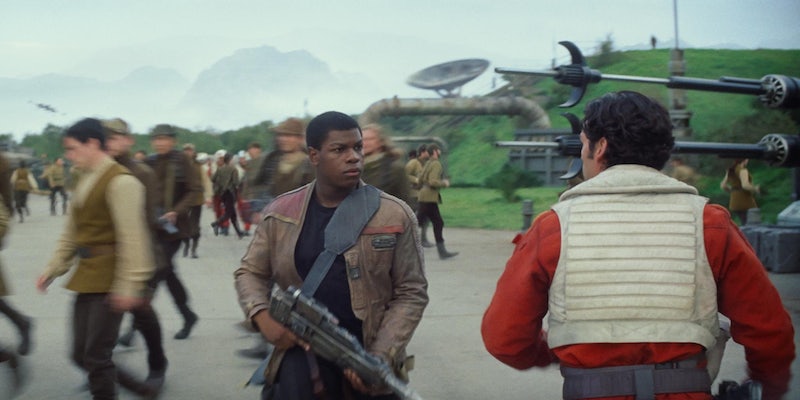 We have some bad, though perhaps unsurprising, news for fans of Finn and Poe‘s relationship in Star Wars: The Force Awakens. According to John Boyega, the romance only exists in Oscar Isaac‘s head.

Until recently, few people would notice or care if a famous actor denied the canonicity of queer subtext in a Hollywood blockbuster. But Finn/Poe is different from long-running slash pairings like Kirk/Spock or Holmes/Watson. The Force Awakens‘ diverse cast made it feel almost plausible that Disney might introduce a queer action hero, and neither character has the baggage of Sherlock Holmes or Captain America—two other characters who are frequently interpreted as queer.

Most importantly, mainstream media outlets took the idea of Gay Poe Dameron seriously. Instead of remaining within the confines of Tumblr and fanfiction sites, Finn/Poe became a widely accepted interpretation of the film. Eventually, one of the actors was bound to speak up about it.

Sad news: John Boyega confirmed to me the Finn/Poe romance is not canon and it only exists "in Oscar's head" :(

Chris Mandle is the features editor at Shortlist, and his interview with John Boyega will be published on Jan. 21. We can already imagine some kneejerk reactions to this news, so before we go any further, here are three things to consider.

If Disney does allow Poe Dameron to come out in the next Star Wars movie, it would be huge step for queer representation in Hollywood. But it’s worth remembering that this was always an unlikely prospect. Like many queer headcanons and slash pairings in the past, Gay Poe Dameron may have to remain in the realm of fanfiction.

On a more positive note, Oscar Isaac managed, perhaps unintentionally, to kick off a fruitful public discussion about the dearth of queer characters in mainstream cinema. If nothing else, the popularity of Gay Poe Dameron proves that audiences are far less conservative than many studios seem to believe.