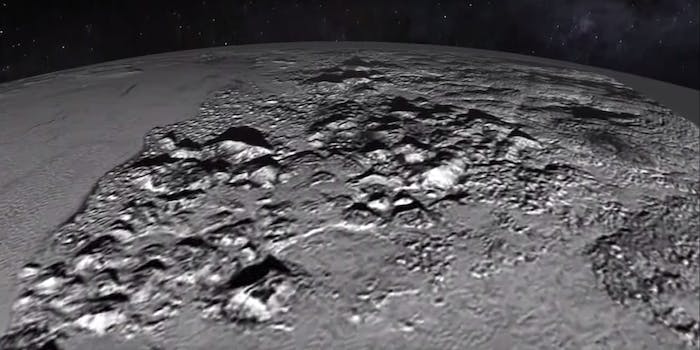 The famous dwarf planet isn't as dim as you might expect.

Even though we’re learning more about Pluto every day, we still only have a very rough idea of what it would be like to live there.

Pluto would definitely be very chilly, but how bright would it be? Even though the Sun on Pluto looks barely larger than a star in our night sky, it wouldn’t be quite as dim as you might think, according to NASA.

The space agency released a Web app that tells you how bright it is on Pluto by comparing the lighting to certain times of day in your area. For me, in Oakland, California, Pluto is as bright as my world at about 7:20pm—when the pink-orange of sunset gives way to the blue-purple of dusk.

Even though the sun appears 1,000 times dimmer, NASA says, our eyes are so good at adjusting to light levels that we would be able to “comfortably read a book” during Pluto’s “noontime.”

NASA is encouraging people to document their location’s “Pluto Times” by tweeting dusky photos with the hashtag, #PlutoTime.