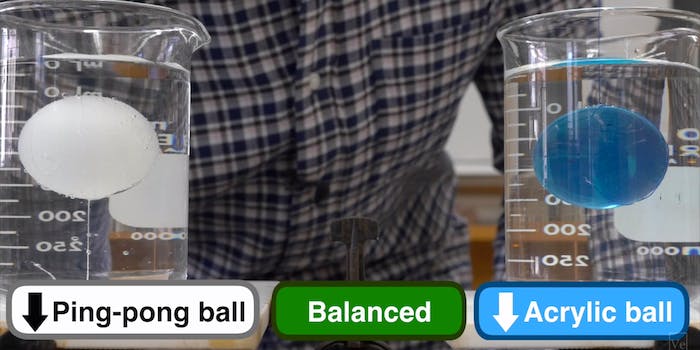 Physicist asks a simple science question that will break your brain

Which way will the balance tip?

Just when you were starting to accept that the Dress really is black and blue, science swoops in to kick you while you’re down.

Here’s a question that will make your brain shrivel: Which way will the scale tip?

It’s a simple question with a not-so-simple answer. You have two beakers with the same amount of water in them opposite each other on a balance. In one beaker is a Ping-Pong ball tethered to the bottom, and in the other is an acrylic ball hanging from a string.

Before you pack your bags and escape to an off-the-grid cabin in the woods because you just can’t handle being on the Internet anymore, Muller has provided the answer in an unlisted video that you can access by voting on the video’s on-screen annotations. You can also vote by clicking a link in the description box of the video, which will direct you to the explainer video.

“It’s like if you go into a swimming pool with someone on your back, they don’t feel as heavy because the water is holding some of their weight,” Muller told the Daily Dot.

In this metaphor, you are the string and the person on your back is the ball. The water supports the person’s weight making them feel lighter to you, the string. As Muller explains in his video, the water reduces the tension on the string holding the acrylic ball, which increases the weight of the whole system. Whereas the Ping-Pong ball’s string has the tension force going upwards, which almost totally cancels out the downward force of the ball in the water.

Still scratching your head? Don’t feel bad. Remember those people in the first video who couldn’t make heads or tails of the experiment? Well, they’re all physics students at UCLA.

“I don’t think people should feel stupid for getting it wrong,” Muller said. “This is a legit hard problem even for people studying physics at a university.”

This is one of several “choose-your-own-adventure” style videos that Muller has made with physics problems. And as always, he posed a second question in the explainer video to see if you really learned anything. If you have the same setup, but are instead pushing an untethered ping pong ball until just barely submerged under the water, which way will the balance tip?