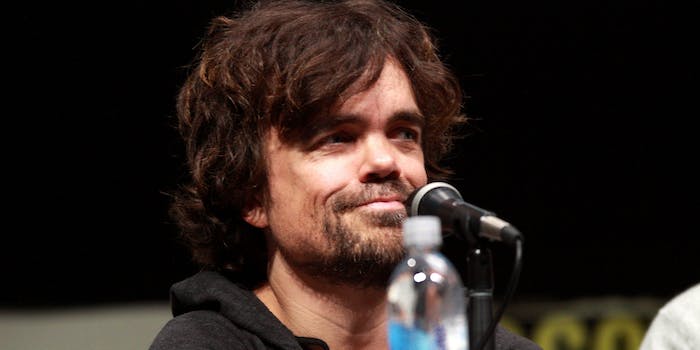 Peter Dinklage’s memorable line may have been cut from ‘Destiny’

“That wizard came from the moon.”

Bungie, the developers behind the Halo franchise, are on the eve of releasing its new game, Destiny, which mixes science-fiction first-person shooters with role-playing games. The playable alpha test on the PlayStation 4 generated considerable buzz earlier this month.

The main criticism, oddly, is the poor quality of the voiceover work from Peter Dinklage, everyone’s favorite actor from Game of Thrones. He plays Ghost, a floating artificial intelligence who assists the players by providing context for where they are in the game, and what they are doing.

The voice work is reportedly lackluster, at best, and spawned one line that went viral in the gamer community: “That wizard came from the moon.”

The meme blew up so huge that Bungie decided to capitalize on it by selling T-shirts. Unfortunately, Bungie is no longer offering the shirts for sale. It will soon undoubtedly become collector’s items.

And in the blog post which announced the removal of the shirts from the store, Bungie also shared that the Ghost dialog from the alpha test has already been updated. “Please pardon our Moon dust,” reads the post.