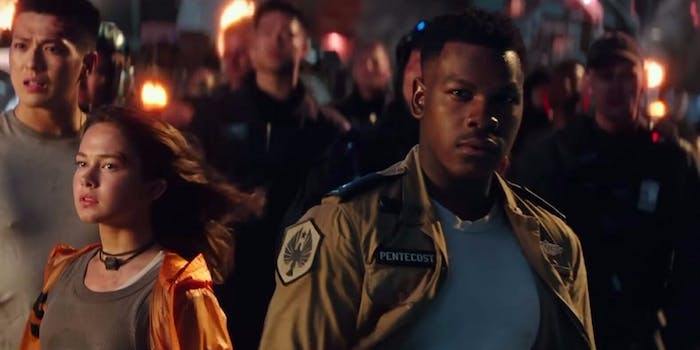 John Boyega details what sold him on the idea of ‘Pacific Rim: Uprising’

Here's why John Boyega wanted to join the cast.

Director Steven DeKnight and the cast of Pacific Rim: Uprising descended onto New York Comic Con and revealed much more about what could be the first step toward a Pacific Rim franchise.

They showed the highly anticipated trailer to thousands of fans, and DeKnight detailed the many types of Jaegers we’ll see in the sequel, which will take place 10 years after the first movie.

Although he wasn’t at the panel on Friday, Guillermo del Toro, the director of the first Pacific Rim movie, and what he accomplished was on everyone’s mind. Star and producer John Boyega explained that he didn’t want to rewrite del Toro’s vision but expand it instead. He was a fan of the first movie largely because of Idris Elba (who played Stacker Pentecost), but he was sold on the idea after he went to a meeting and saw concept art of himself in a Jaeger costume. The movie, he said, was everything fans wanted it to be.

But his character, Jake Pentecost, starts out in a much different place than his dad. When we meet him, he’s living in a half-mansion and scrapping, but that eventually changes through something circumstantial.

Newcomer Cailee Spaeny, who plays Amara, said her character relates to Jake even though they’re coming from different places. She explained that Amara’s parents were killed in the first Kaiju attack and decided to become a Jaeger to stop the next attack, which she doesn’t doubt will happen.

On the other hand, Burn Gorman’s Hermann Gottlieb hasn’t changed, although he has more money to work with this time around. Yet he’s still very much affected by what happened in the first movie.

While the idea of a franchise is still early, Boyega noted how hopeful fans had been as talk of a sequel remained uncertain.