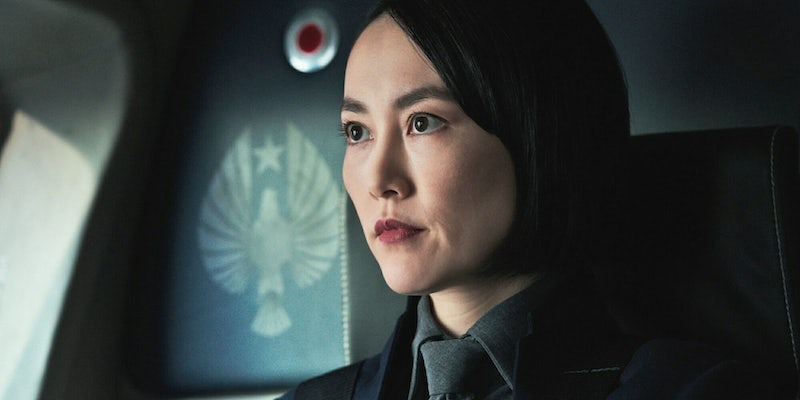 It forgets the emotional worldbuilding that made 'Pacific Rim' so great.

I went into Pacific Rim Uprising with low expectations. After Guillermo del Toro stepped down as director, Legendary Pictures replaced him with Steven DeKnight, a TV writer who had never directed a film. Combined with the loss of Pacific Rim‘s two lead actors, this didn’t inspire much confidence. So I was pleasantly surprised to discover that Pacific Rim Uprising is actually fun as hell. John Boyega is superhumanly charming as the new protagonist Jake Pentecost, and Uprising has the same sincerely over-the-top vibe as the Fast and Furious franchise.

Basically, the trick is to watch Uprising as a standalone movie. Because as a sequel to Pacific Rim, it kind of sucks.

Compared to the forgettable popularity of Transformers, Pacific Rim definitely earned a cult following. People responded to it because it felt unique, mostly thanks to the distinctive main characters, Guillermo del Toro’s visual style, and the emotional worldbuilding behind the Jaeger pilots. All three were noticeably absent from the sequel, with the exception of a poorly conceived cameo for Mako Mori (Rinko Kikuchi).

What happened to Mako Mori in Pacific Rim Uprising?

When the first film came out, Mako Mori inspired a lively conversation about women in action movies. While Pacific Rim failed the Bechdel Test, it was one of very few Hollywood blockbusters with an Asian female lead. Mako was a complex, non-stereotypical heroine, and the film hinges on the sweet and supportive partnership between her and Raleigh Becket (Charlie Hunnam). They’re drift compatible, a soulmate-like relationship that lets them form a psychic link and pilot a giant robot together. It was a story about how love can save the world.

That conversation resulted in a new media analysis tool similar to the Bechdel Test. The Mako Mori Test asks if a film includes at least one female character who a) gets her own narrative arc, and b) isn’t there to serve a man’s story. Pacific Rim Uprising passes this (and the Bechdel Test) with flying colors; it actually has more female characters than the original. However, Mako’s role embodies the exact tropes her own test was designed to critique.

Pacific Rim Uprising was initially meant to star the original leads, but Charlie Hunnam dropped out in favor of another project. Rinko Kikuchi only returned for a cameo role, having recently given birth. As Jake Pentecost’s sister, Mako offers some exposition and advice, then suffers a violent death to motivate his story. Raleigh Becket’s absence is never explained, to leave things open for him to return in a sequel.

Maybe Rinko Kikuchi had already decided she was done with the franchise, but this still feels like an insulting epilogue for Mako Mori. She goes from hero to doomed supporting character, and in the years between movies, her character just got an office job. In a story full of cool robot pilots and eccentric geniuses, Mako is the now serious pencil-pusher character. Her storyline, inasmuch as she even has one, involves a council voting on a funding decision. Mako barely feels like the same person, and for fans of the first movie, her cameo may be worse than seeing nothing at all.

On top of Mako’s disappointing role, Uprising abandons the “drift compatible” concept in favor of something much less meaningful. While the first film emphasized the rarity of drift compatibility, Uprising treats it more like a skill than a personal bond. People with drift-compatible abilities go to a training academy for Jaeger pilots and then get flung together in random combinations for the final action sequence. The new heroine, Amara Namani (Cailee Spaeny), drifts with two of her classmates, before swapping in for Jake’s partner when he gets injured. Amara even pilots a homemade Jaeger by herself, explaining that it’s small enough to be driven by one person.

Is this an overly detailed nitpick for a dumb blockbuster about giant robot battles? Maybe. But the Jaeger pilot worldbuilding was one of the main things that made Pacific Rim so great in the first place. It’s hard to understand why Steven DeKnight and his cowriters decided to abandon it for Uprising, because it removes the film’s defining emotional hook. Without drift compatibility, Pacific Rim just becomes another CGI-heavy action franchise.