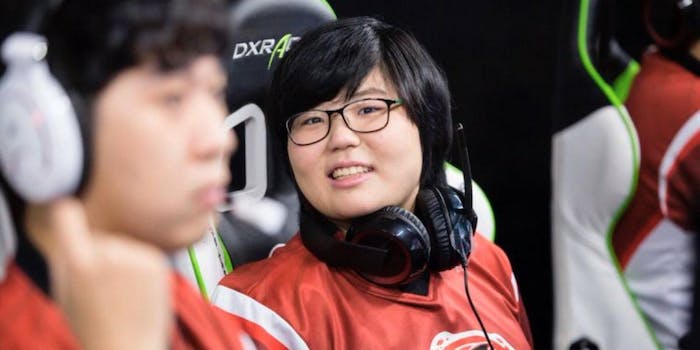 If you follow Overwatch League, you won't be surprised it's Kim “Geguri” Se-yeon.

If you follow gaming, you’re probably aware of Blizzard’s lauded online shooter Overwatch. You might even follow Overwatch League, which is basically the NFL of esports. In it, city-based teams compete in seasons of Overwatch for glory and prize money. But the league has had a very obvious problem from the get-go: All 100-plus players were men. That has just changed, as the Shanghai Dragons team hired the league’s first woman, Kim “Geguri” Se-yeon.

The 19-year-old Geguri is one of the most famous Overwatch players. For one thing, her record was so impressive that she was accused of cheating in 2016. That prompted her to do a live-stream with a second camera aimed at her hands to prove she was really controlling her character. Geguri played for a South Korean league called Apex until Overwatch League began and prompted it to shut down.

When Overwatch League started its first season last month, journalists asked why it had no women in its ranks. The replies were unsatisfying, to say the least. Team owners cited co-ed housing challenges. They mentioned the perception that hiring a woman might be construed as a PR stunt. In response to why no one hired Geguri specifically, one American team referred to the language barrier.

Now that the Shanghai Dragons have picked up Geguri (along with a few other male players), they might be able to turn their fortunes around. To date, the Dragons are the only team to have scored no wins, for a record of 0 – 10.

A spokesperson for the team said in a statement: “The Shanghai Dragons look forward to tackling the core problems of the team with the help of these new signings, as well as showcasing more competitiveness in skills and tactics with better performances in the matches ahead.”

The Dragons’ next match is scheduled for Feb. 21. The team is still working to get visas to bring the new signees to the U.S., where all matches take place.