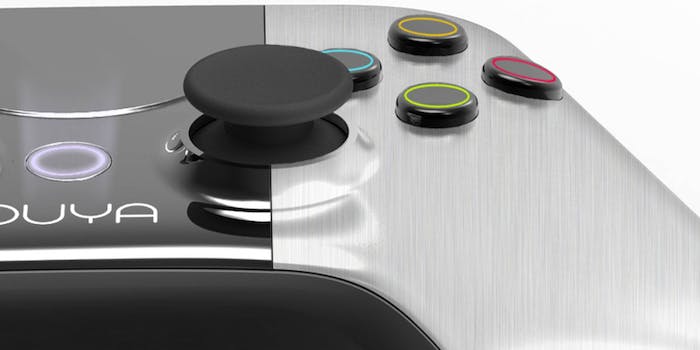 Ouya, the company behind the little Android gaming console of the same name, is reportedly putting itself up for sale to cut back its debt. Fortune reports that a confidential email sent by CEO Julie Uhrman to investors claims that the company is looking for a buyer.

Fortune reports that Ouya has taken on the services of investment bank Mesa Global to help with the transaction. Mesa Global has been responsible for some major tech mergers, like when Viacom sold Rock Band developer Harmonix, or when Google acquired Songza.

Ouya was one of Kickstarter’s major successes in 2012, raising more than $8.5 million during its funding drive. After that, Ouya raised an additional $15 million in Series A funding. Well, it seems those investors aren’t too thrilled with Ouya’s current prospects. Uhrman writes: “our focus now is trying to recover as much investor capital as possible.”

Last year we reported that Ouya had partnered up with Chinese phone manufacturer Xiomi to bring its environment to Xiomi’s new set-top box. It will go on sale on AliBaba next month.

Even with its success overseas, it wasn’t enough for Ouya to overcome its lackluster performance in the United States. Apart from its initial release, which drew a lot of hype due to its open-source nature, there has not been much buzz around the console. And it’s not for the lack of quality titles, but maybe because the general gaming conversation still so strongly revolves around the current generation of consoles.

Either way, Uhrman is still optimistic: “We believe we’ve built something real and valuable. I continue to read the tweets and emails of our fans who play OUYA every day, and our catalog is now over 1,000 apps and 40,000 developers. We have the largest library of Android content for the TV (still more than Amazon) — hells ya!”