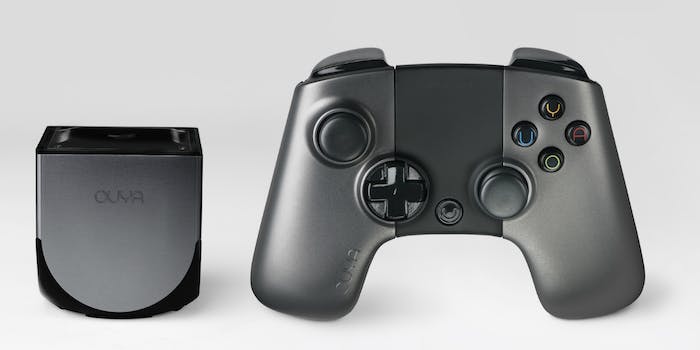 Razer, the company best known for its high-end PC gaming hardware, has purchased indie-centric hardware and software developer Ouya in an all-cash deal.

The precise terms of the deal have not been disclosed, but we do know that only the software portion of Ouya was purchased by Razer. Existing Ouya hardware will be supported for another year by Razer, and Ouya games and accounts will be integrated into the Razer Cortex platform. Forge TV, Razer’s Android-based set-top box designed to stream PC games to televisions, will likely be the effective hardware replacement for the Ouya console.

Reports in April indicated that Ouya was looking for a buyer, and TechCrunch in June reported rumors that a deal with Razer was being negotiated. Today’s confirmation of the deal with Razer means that Ouya’s vision of an indie developer’s dream console is dead.

Ouya CEO and co-founder Julie Uhrman today broke the news on Twitter, followed by a litany of “thank-yous” for early supporters of the console.

.@juhrman OUYA was a once in a lifetime experience. Now, I'm off to find the next…stay tuned!

The concept of the Ouya console was to create an open platform that indies could utilize to make games meant for the living room, in essence giving indies an entrance into the console gaming world dominated by Microsoft, Nintendo, and Sony, rather than having to focus on smartphone and tablet game development.

The wildly-successful Ouya Kickstarter generated almost $8.6 million to back the production of an Android-based console that would ship complete with its own controller, and would only cost $100. Ouya faced early criticism from pundits and industry experts that it would never be able to deliver hardware at the needed level of quality to compete with the major manufacturers, at so cheap an asking price.

Reviews of the Ouya in 2013 validated the early concerns. The Verge stated that Kickstarter backers had signed up to “beta-test a game console.” Kotaku reported a glut of games for the system at release, but that the system itself wasn’t stable enough such that one could always play those games. Cnet among other things took issue with the quality of the included control pad. The Guardian wasn’t pleased with the selection of games. And everyone agreed that the UI on the Ouya was a disaster.

Ouya co-founder Muffi Ghadiali left the company in January 2014, the same month that an updated version of the Ouya console was released. Prior to the 2014 Game Developers Conference, Uhrman told Ars Technica that the company was introducing a new initiative called “Ouya Everywhere,” that would bring Ouya content to devices other than the company’s own console.

The Mad Catz M.O.J.O. in March 2014 was one of the first Ouya Everywhere partners, followed by a deal with Wikipad announced in July 2014, and a deal with Chinese smartphone company Xiaomi announced in August 2014. The Chinese e-commerce company Alibaba in December 2014 invested $10M in Ouya, as part of a deal to incorporate Ouya’s software and library of games into Alibaba’s own set-top microconsole.

With today’s announcement of the purchase by Razer, it’s clear that Ouya Everywhere and all of the associated deals were not enough to save the company.

TowerFall, the game described by critics as the “killer app” for the original Ouya console, was in 2014 released on the PC and PlayStation 4 as TowerFall Ascension, so if you still want to try what was arguably the most exciting game released for the Ouya, the company’s death won’t get in your way.