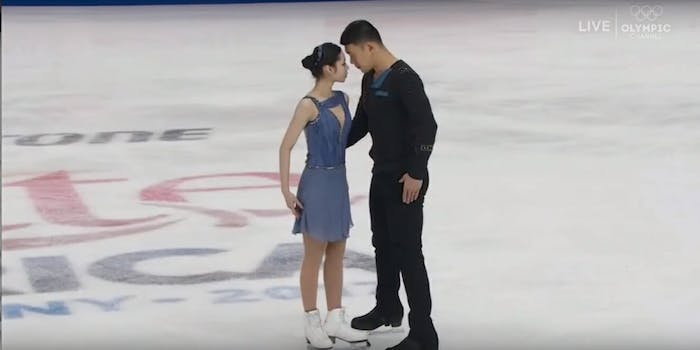 'Rogue One' just arrived at the Olympics.

Following on from last week’s Yuri on Ice program from a pair of Japanese figure skaters, we’ve got another nerdy Olympic performance on our hands. Competing in the pair skating event, China’s Yu Xiaoyu and Zhang Hao performed their free skate to a medley of music from Star Wars. The program opens with Jyn Erso’s suite from Rogue One, before moving onto Leia’s theme from A New Hope.

Yu and Zhang placed eighth on Wednesday night, but that isn’t too much of a disaster for China. They had another pair competing in the same event, winning a silver medal. Since we can’t share Olympic footage with you (thanks, NBC!), you can actually watch a better version of that Star Wars program from Skate America last year, where they came in second overall.

This isn’t the only Star Wars program we’ll see at this year’s Winter Olympics. In fact, they’re not even the only Star Wars skaters from China. Chinese men’s champion Jin Boyang will compete with a medley that begins with “Mars” from Holst’s The Planets, before segueing into Star Wars music—complete with Darth Vader breathing noises. Last season he used Junkie XL’s remix of the Spider-Man theme. Athletes are so much more geeky than we thought.