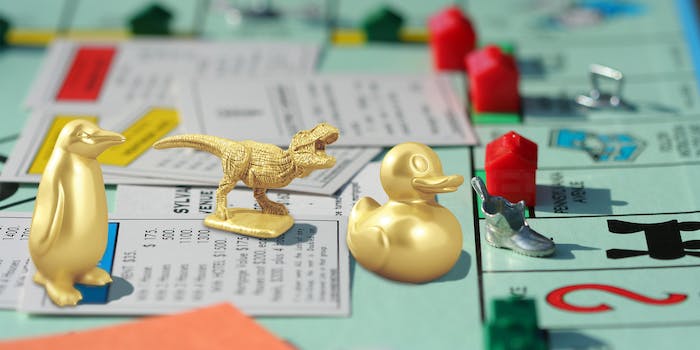 3 classic Monopoly pieces get the boot in online contest

No more fighting over who gets stuck with the thimble.

After 4.3 million online votes from 146 countries, the classic board game Monopoly is ready to debut three new game tokens.

In the end, voters decided the T. Rex, rubber ducky, and the penguin would replace the thimble, the wheelbarrow, and the boot. We have a feeling a few people will miss the old playing pieces, but lest nostalgia get the best of you, remember that this isn’t the first time Monopoly has changed the lineup. Scottie the dog and the wheelbarrow joined the standard playing pieces in the 1950s, after Monopoly’s launch in 1935. And in 2013, Monopoly sent the iron packing in favor of Hazel the cat.

Scottie the dog still reigns as the favorite, taking the top spot when the contest votes were tallied. According the Associated Press, Scottie earned 212,476 votes, with the newbie T. Rex coming in second with 207,953, and the top hat coming in third with 167,582. The battleship was the last token to squeak into the lineup, beating the tortoise by just 5,700 votes. And the least popular piece? That would be the rain boot, which got just 7,239 votes.

You can expect Monopoly games featuring the new lineup of tokens to hit stores this fall.