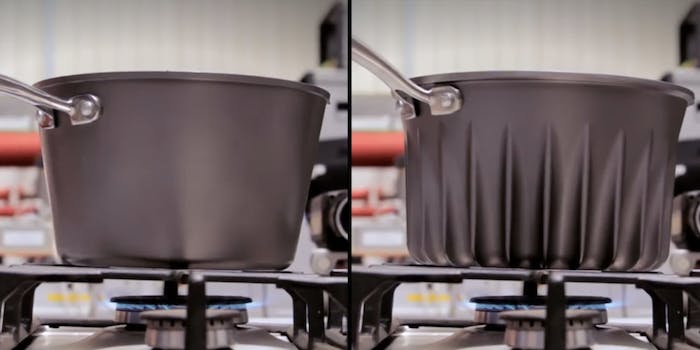 How much thought have you put into your saucepan? Probably not a lot, but an English rocket scientist set out to see if the age-old design could be improved to transform the way we boil water.

Enter flare pans, a new take on the saucepan that could dramatically reduce the amount of energy it takes to cook almost anything. Dr. Tom Povey, a scientist at Oxford University, designed the pans over a three year period, applying the same sort of testing, aerodynamics and heat transfer knowledge he uses for flight engines.

“Most of our science takes ten years to get into a jet engine,” says Povey in the mesmerizing YouTube video that explains the pans. “So it’s really exciting to see something turn into a product that the public can buy.”

The new and improved pans use a fin technology to channel heat that would otherwise be lost up the side of the pot, cooking food 44 percent faster. Povey came up with the idea on a mountaineering trip, where high altitudes made cooking nearly impossible. The flare pans are already winning awards for energy efficiency and design, but unfortunately the pans aren’t for sale just yet. Future flare cookers can keep tabs on when they’ll be able to have one in their home on the product’s Web site.